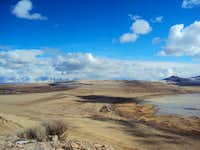 Plain Below Buffalo Point
Cheesy hike; heroic view! Buffalo Point is on the northern-most point of Antelope Island. It is a treeless, low-level mountain topped by boulders and sage-brush overlooking a dying inland sea. Buffalo Point, at 4,785 feet with a surprising 395 foot prominence, is the 4240th highest mountain in Utah. Even though it is one of the easier summits to bag, Buffalo Point offers spectacular panoramic views of the Northern Wasatch, Fremont Island, and the Great Salt Lake. Below the summit, is a sweeping grassy plain populated by herds of buffalo, antelope, deer, elk and coyotes. You feel as if you had gone back into time. Overall, the summit is an unexpected pleasure you can share with you family and the hardest part of reaching the summit is paying the $10.00 to get on to Antelope Island. 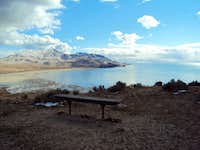 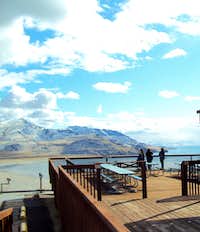 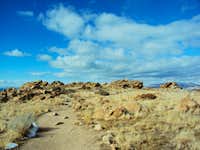 On Top of Buffalo Point
There are a couple of different ways to summit Buffalo Point; the Tourist Route and a sportier Scenic Route. TOURIST ROUTE The Tourist Route starts at the Interpretive Center parking lot and follows the obvious trail up the side of the hill, along the traverse to the boulders on top of the point. While it is a little steep (200 foot gain in .40 miles), it was laid out with tourists in mind and poses no significant challenges. If you tire along the way, or simply want to admire the view, there are rest benches spaced out through the route. Return the way you came. SCENIC ROUTE: The Scenic Route starts at the White Rock Bay Trailhead (down the hill from the Interpretive Center) and follows the Lakeshore Trail along the west side of Buffalo Point, about 300 feet from the lake. The trail continues north without any significant vertical for about 2 miles. Near the trail’s northern point, before the trail turns east, you’ll see a side trail going steeply up the side of the hill. Take the trail to the ridge. On the ridge the trail dies out, but it’s pretty easy to follow the ridge to the summit, picking your way over the rocks and boulders. Once on top, enjoy the view and follow the Tourist Trail to the Interpretive Center and then down the hill again to the White Rock Bay Trailhead. HIKE INFO Tourist Route Trailhead: (41.032638,-112.256241) Distance: ~.41 miles one way Elevation gain: ~200 Saddle: 4,390 Peak Elevation: 4,785 Highest Point in Hike: 4,785 Isolation: 3.27 miles Lakeshore Trail Route (the Scenic Route) Trailhead: White Rock Bay Campsite (41.027749,-112.250447) Distance: ~3.5 miles loop Elevation gain: ~380 Saddle: 4,390 Peak Elevation: 4,785 Highest Point in Hike: 4,785 Isolation: 3.27 miles 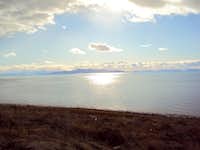 Lake Shore Trail
Buffalo Point on Antelope Island is open year round. Visits in from Late-April through Mid-September are usually sub-optimal because of the swarms of biting flies and brutal summer heat on the dry, treeless terrain. Trust me; there are better places to go in Utah during the summer! The best time to tour the Island and attempt any of the island peaks is in the late fall, early spring and winter when the crowds are sparse and the flies in hibernation. In addition, there seems to be more animal activity during the day increasing the likelihood of getting that great camera shot. For late fall and early spring visits, you will most likely encounter some light snow on the ground but not anything you’d need special shoes for. The area around the island is great for winter snowshoeing and possibly cross country skiing. 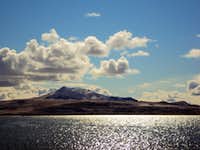 Antelope Island From Causeway
Take exit 332 off I-15 and drive west on Antelope Drive through Syracuse toward the Great Salt Lake. You can see Antelope Island from the Highway but it’s still 15 miles away. Once you reach the lake, pay the $9 entry fee and drive onto the causeway. The Causeway is about 7.5 miles long across the lake. Once across, you’ll see an Air Force/ Special Forces Memorial and a small Marina. Follow the signs to the Buffalo Point Café and park in the Interpretive Center’s parking lot. Facilities on the island include rest rooms, hot shower rooms, picnic/group shelters, boat launches, marina, cafés, information and a large Visitor Center. The Davis County Causeway from Syracuse to the island is an interesting piece of construction that has been built, rebuilt and rebuilt again. The 7.5 mile causeway linking the island to the mainland is an earthen dike that was originally built in 1969 and was heavily damaged by the lake’s waves. The state made numerous improvements raising the causeway. Heavy snows and rains in the early 80s raised the lake’s level above the causeways and the road was completely under water. After the state’s drought lowered the lake’s level, the causeway was rebuilt in 1992. A good portion of the “causeway fee” goes toward a fund to rebuild it again if it is destroyed by future floods. 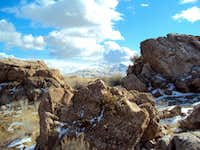 On Top
RED TAPE Red tape for Antelope Island is fairly extensive and ranges from “don’t annoy the large, violent wild animals” to “campfires are prohibited outside of camping areas”. See the State’s website for detailed information and fees. You are on state land everywhere on the island and the Great State of Utah is determined that Antelope Island will remain a viable, interesting nature preserve for generations to come. Check out the regulations before you visit. CAMPING There are 2 campsites for reservation located on the north part of the island. Bridger Bay Campground is the larger of the two with 26 primitive sites available. The sites include picnic tables, fire pits, and toilets are available. There isn’t, however water or electricity available. No horses are allowed White Rock Bay Campground is smaller with 12 primitive sites. It is similar with picnic tables, fire pits, and toilets are available. Once again, there isn’t water or electricity available. Horses ARE allowed at this site. Reservations may be made by calling Utah State Parks and Recreation, 322-3770 in the Salt Lake City calling area or toll-free 1-800-322-3770, from 8 a.m. to 5 p.m., Monday through Friday. Should you decide to spend a couple of days, Antelope Island is great for running, biking, horseback riding, saltwater swimming, snowshoeing and boating. There are several places to grab a snack (in season) as well as picnic on the island. 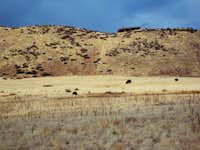 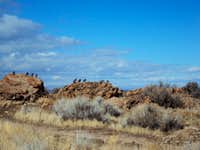 Chuckars!
Antelope Island’s main claim to fame is its herd of 700 free roaming American Bison. These magnificent creatures get to almost every point of the island and are invariably seen standing in herds. They are easily spotted and photographed. The herd is one of the oldest surviving herds in the US as it was spared from the extinction-level bison hunts that wiped out the huge plains herds in the 1880s. Two Utah men brought the animals to island in 1893 and essentially saved the species. As a result the herd’s vitality, the Antelope Island animals are used today to increase the genetic diversity of other free-roaming bison herds across the United States. These beautiful creatures are a vital national ecological resource. In addition to the island’s signature bison, chances are pretty good you might also spot pronghorn antelope, bighorn sheep, coyotes, bobcats and/or mule deer. Since they aren’t hunted, these animals don’t hide as much as usual and are a photographer’s dream. The island itself was named after the pronghorn antelope that early explorers converted to rations. The original pronghorn herd died out in the 1930s but a new herd of 24 was reintroduced in 1993. While summiting the islands peaks, you’ll usually see several species of raptors soaring around the mountainsides. There is also a wide variety of local birds on the island including Grouse, Chuckars, and California Sea Gulls. During migration season you’ll spot everything from geese and ducks to willets and stilts along the shoreline and in the salt marshes.