At 9,678 feet, Swasey Peak is the highest peak in the House Range and a prominent West Desert landmark. Despite the fact that this is the highest peak in the range, Swasey Peak's more spectacular neighbor to the south, Notch Peak is much more famous, because of the tremendous vertical drop. There are four limestone caves in the area as well as a nationally significant fossil collecting site. Mule deer, wild horses, and antelope are plentiful, hiking and scenery are excellent, and potable water is available at several springs. On and around the summit, you can find Bristlecone Pines, which are the oldest living trees in the world. They haven't been studied/dated here, but in California and Nevada, many were found to be over 4,000 years old. In addition to the Bristlecones, attractions include the worlds largest known deposit of 500 million year old trilobites.

Swasey Peak may be reached by travelling the Tule Valley road north from old Highway 50, which branches west from Utah Highway 6-50  about 10 miles west of Delta. Alternatively, from Highway 6 about 10 miles northeast of Delta, the Topaz Mountain road turns west; follow road signs to Sand Pass, which is at the northern tip of Swasey Mountain. Gravel and dirt roads parallel the range on either side, providing access to the ridges and canyons. 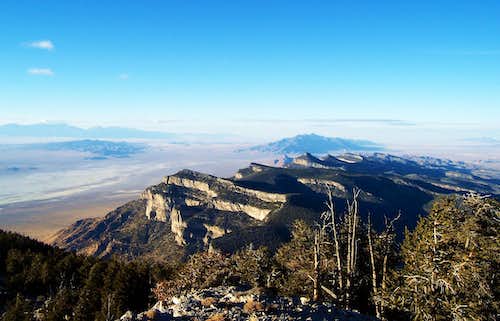 The view from Swasey's summit looking north along the House range.

All mileages are zeroed from the intersection of 6 and 50 in Delta. From the intersection of US highway 6 and 50 in Delta head west towards Hinckley mile 6.5. Continue of the aforementioned highway to mile 32.4. Turn right onto the dirt road at the sign "Long Ridge Reservoir 7 miles", "Death Canyon 21 miles". This gravel road heads off in northerly direction towards Swasey Peak. You will reach the reservoir at mile 39.0 while negotiating some sharp turns; continue to mile 40.8 to the intersection with Notch Peak Loop road, intersecting from the left or west. 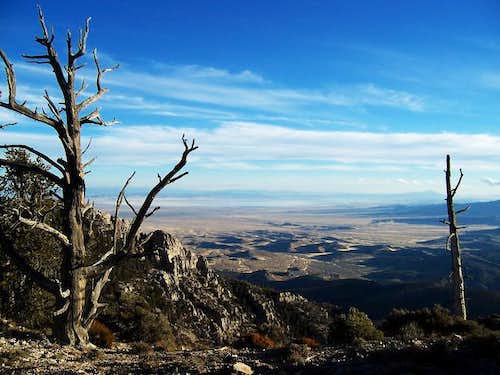 Looking southeast on the ridge to Swasey Peak.

There are several route possiblities.

By far the most popular and easy route is the Southeast Ridge. The route is fairly steep, but not difficult. The distance is less than four miles round trip. Note: Although not in the route description, there are reamins of a helicopter crash on this route. Its right on the saddle east of the peak.

The West Face and Sinbad Gulch Routes are other possibilities. With some searching around, you can actually find a completely rope-free route, but this will require routefinding. This route is a bit shorter than, but much more rugged route than the Southeast Ridge.

Another possibility is from the north and Sawmill Basin and from Robbers Roost Canyon. This route is longer than the ones above, but isn't as steep. That doesn't mean its easier, however, as there is quite a bit of bushwacking involved. The route isn't quite as spectacular as the ones from the west side of the range (above) because you don't view the huge cliffs until reaching the summit. On the plus side, the area has a nice forest, which is certainly different from the desert sides of the mountain. This route will not be discussed in detail here as I haven't completed the entire route. 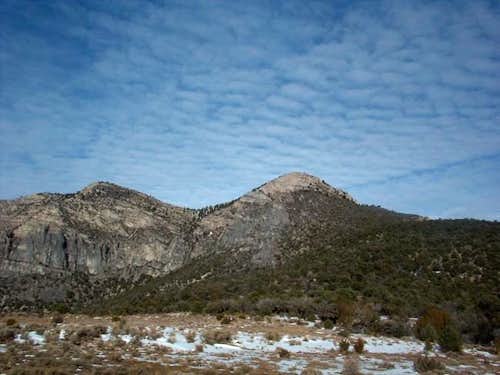 Looking north towards Swasey, the summit is to the left.

The best seasons for climbing here are mid-April through mid-June and then September through October. Summers are warm. Winter climbing is possible, and not too difficult from the SE Ridge, but check in person with the BLM in Delta about current road conditions. This is a remote area, so go prepared. 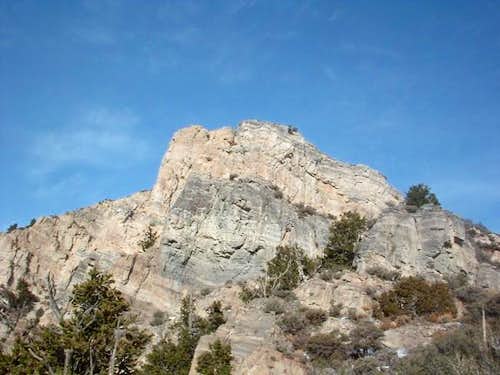 No permits are required. The entire House Range and access route is located on BLM land and Swasey Peak is in a Wilderness Study Area. Standard wilderness rules apply.

There are campsite in the canyon after the intersection with Swasey Spring, so nice primitive camping areas are available from there to the end of the road near Sinbad Springs. There are no campgrounds in the area.