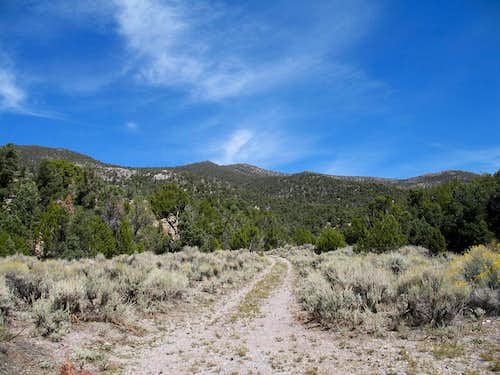 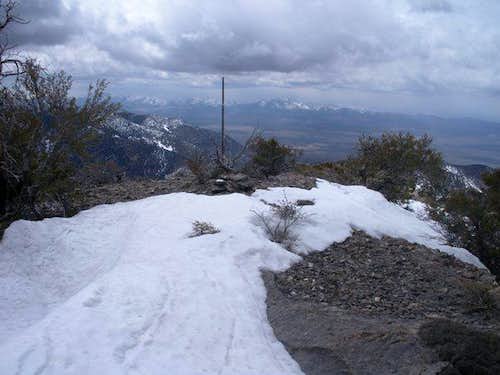 What? you ask. Another mountain in the Utah western desert? To that question I would answer YES. Each of these mountains is a gem and rarely visited which gives them a special appeal to someone like me. The fact that they are prominence peaks makes them even more attractive but for the moment, lets talk a bit about the peak and its area. There is nothing technical about them but getting to the area is the biggest challenge. It helps to have a high clearance 4WD vehicle and to be totally equipped
and prepared for being in an isolated part of the state of Utah. That means, a full tank of gas, plenty of water and prepared for anything if you should suffer a vehicle breakdown. Do not count on cell coverage, it doesn't exist out in this area although a satellite phone might be nice to have along. 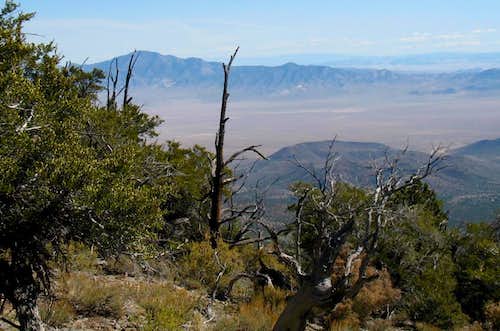 View from summit eastward
The Wah Wah Mountain range extends for 55 miles north and south in the western desert area of Utah but this peak is south of highway 21 and is the highest peak in the southern section of the range, separated of course by highway 21. However, while it is an intriguing area you need to be warned that this is really a remote place to visit. That is true of most of the mountain ranges in the western Utah desert but you really feel it when you make the effort to travel to this area. The name Wah Wah comes is an indian term and yes it does mean water but not exactly as one might think. Two sources report the meaning of "Wah Wah" as 1.) Good clear water and the second source says 2.) Salty or alkaline seep. Now those are pretty far apart so I looked up another source and it was even more confusing. I
quote a lady named Alexa Robinson. She gives the following perspective on the origin of the name, "Wah Wah":"Wah Wah Valley was named by the Indians because there is a rumbling noise that sounds like WahWah. They say it comes from Wah Wah Springs. You can be 40 miles from the springs and hear the sound is just as loud as if you are right at the springs. We could hear it over in the Escalante Valley 30 miles away just as loud. It would take spells of doing it sometimes 2 months without, sometimes once a day."
I vote for "good clear water".

The reason I was even interested in the Wah Wah mountains is because they contain two of Utah's 81 peaks that have over 2000 feet of prominence. For this page, we'll concern ourselves with the highpoint peak that is in the southern part of the range (below highway 21). Wah Wah peak 9393, has about 3000 feet of prominence (3104 to be exact) and it comes in at #35 on the Utah Prominence peak list.

This is one of those peaks that you don't see readily from anywhere since other peaks that are nearly as high block your views. The area has a lot of scrubby brushlike trees that can make your progress slow and make your routefinding a bit more interesting. There is no trail or road to the top and this is probably more in character with the area. It is prime rattlesnake country all though I didn't see any. Maybe it is too arid for even rattlers.

Decent views are available from the summit area, particularly to the east and west and the dominant feature to the west is neighboring Indian Peak, a peak worth visiting and everybit as remote as this one. The best plan is to get both of these peaks on the same day and you can camp near Indian Peak which is better suited for camping.

I will describe this from Milford Utah although you can come in from the west via the Great Basin National Park area. Road 21 is the key road and from Milford it goes like this:

Zero you odometer at the Oak Tree Inn Motel on the west edge of Milford.
Drive west for thirty miles until you reach Wah Wah summit. As you drop down the grade, watch for milepost 42 as the turn to the left that you want is just beyond it at the 34.2 mile mark. There is a very small BlM sign on the right side of the road indicating Lund and Vance Spring but it is easy to miss. Should you miss the left turn, don't despair, there is another turn off in a bit down the road. Assuming you made the correct turn off, you will encounter a crossroads at the 38.8 mile mark where you will turn left onto the Pine Valley road. Stay on this road until you encounter another road going left at the 43.7. Turn onto it and this will begin to take you towards the Wah Wah mountain range. At 46.2 miles, a road coming in from the right will be passed and you will note a sign indicating Pine Grove in 3 miles. Follow the road as it passes over a cattle grate and begins to climb a bit. The road will enter a canyon and stay on it until about the 52 mile mark. I found a spot on the side of the road and
basically just went cross country up the slope, using my GPS to guide me along with a map of the area.

It is possible that a jeep road that takes off to the north might provide easier access but I'll have to leave that information up to some future
person who tries that way. There is no right or wrong way up this mountain, you need to waypoint the summit and go accordingly, avoiding cliffs and the like. 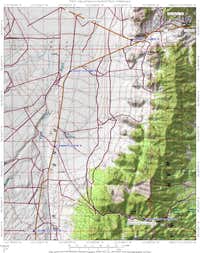 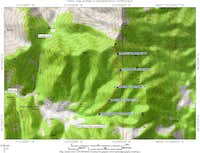 
I can offer no solid route as my approach was to use Mike Kelsey's book as a loose guide and then just play it by ear. I had waypointed a route up but it did not look very good when I actually got on the mountain. The map that is included will show how I went up but that doesn't mean it is the best route to go. As mentioned earlier, there is a jeep road to the west that might actually provide a better route but that is speculation on my part and it doesn't appear to offer much in the way of elevation gain savings. Still, it might prove to be a more reasonable way to go. I hope others will share their experience should they go a 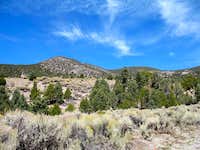 different way. My route was about 1.7 miles and 2000 feet of elevation gain. My route was also a bit west of the way Kelsey went up as in his book, Kelsey went up from Pine Grove Pass and route finded his way north along the ridge line. He also suggests a couple other possibilities and my recommendation would be for you to check out his book if you have a chance.
It also includes an interesting history of the West Utah desert and information on many other desert peaks.

Update:  On April 14th, Dennis Poulin and I drove to a switchback at about 7850 feet and proceeded from there. We went up the ridge until it connected to the main portion of the mountain and we just followed it up since it was an obvious route.  BUT, take a way point or keep a track of your route up as you can actually end up going down the wrong ridge on  the descent.  The brush was never bad the way we went and we could always find a logical way through the stuff.  Staying higher on the ridge will make it easier if you go the way we went.  Dennis will more than likely post a track on peakbagger when he gets the chance to do so.

Some other trip reports  can be found at peakbagger.com as well as some other useful information.

The is BLM land so there is no red tape but there were cattle grazing in a pasture area (fenced) on the north side of the road. An old mine camp is passed as you get close to the area where I parked near Pine Grove Pass (I didn't go all the way to the pass. Despite the fence, we still encountered a couple of cattle on the roadway so just be aware that they might be there. 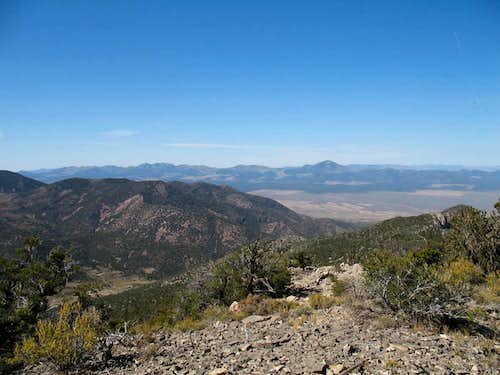 There are plenty of places shown in Mike Kelsey's book where you can camp but as most are on BLM land, finding a camp spot isn't a big problem. BLM land is land you can car camp on although I recommend that you are careful to leave as little impact as you can and not create new fire rings or the like. There are no organized campgrounds in the area but according to Mike Kelsey's book, there are a few campspots indicated on his map (pg.249)

My wife and I stayed at the Oak Tree Inn in Milford and found it to be a very nice motel and the price of the room includes a full breakfast. ($80 range)