If you arrive in west Sedona via Highway 89A, you'll be visually awestruck
by Capitol Butte (a.k.a. Thunder Mountain) to the north of 89A in Sedona. 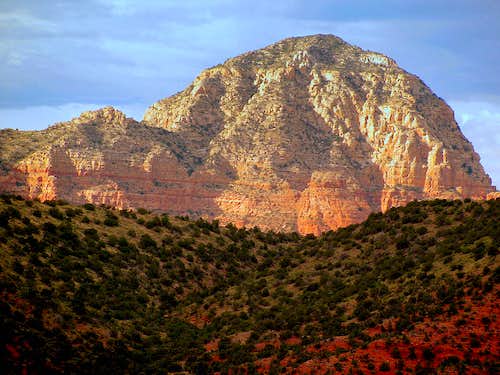 Capitol Butte (6355') is one of the highest summits in Sedona with fantastic views. It offers multiple challenging 4th Class routes to the summit.

The three most common routes are Lizard Head, starting on the west side near the Vultee Arch Road at the Kiosk for Red Rock passes, which is 3rd class.

Additionally, there is a straight route up the south-facing deposition or the east-facing drainage that is also on the south side. These two routes meet on the south face below the ridge that descends west from the summit.
The route to the summit runs near this ridge.

Another option is to climb the north face. The north face route, to my knowledge, has only been ascended once and it involves some tricky route finding. One approaches from the southeast up the drainage to the saddle between Capital and it's sub-summit to the north. At the saddle a brushy ramp can be seen ascending to the west. At the top of the ramp you can rappel down into a 4th-class gully which runs up to the plateau just below the summit, and it's 3rd to 4th class climbing from there. It's a good idea to find your rap station before heading to the summit.

The former owner of this page left a bit of webbing on a tree, but it would be hard to find. It takes two full 60-M ropes to rap back down to the ramp. It's fun making a big rap off Capitol, but if you can't find a good safe place to set it up you can descend down one of the other three routes.

Higher up on the mountain you'll find a 4th-class mantle up through a chimney. No ropes are needed to make this climb. The east summit block is slightly higher. Be advised some route finding skills are required. Be able to down climb anything you ascend. Climbers have gotten stuck, requiring rescue.

Buena Vista Trailhead:
From the 89A/179 roundabout ... take 89A west 2.0 miles;
turn right on Coffeepot Drive for 0.6 miles; turn left on
Sanborn for 0.2 miles; turn right on Little Elf Drive and follow
trailhead signs; parking lot is on your left at Buena Vista. 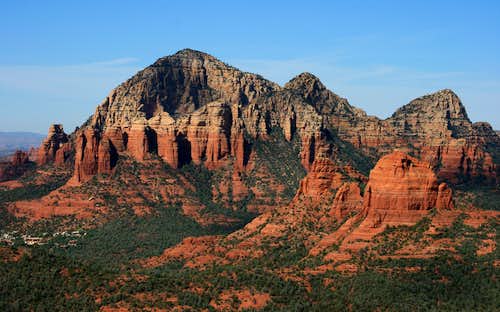 In May, 2006, after 83 years of operation out of the Brewer
Road Ranger Station in Sedona, the Red Rock Ranger District relocated to a
new (5,000 sq. ft.) Visitor Contact Center on a site south of the Village of
Oak Creek (VOC) along Highway 179.</font color> 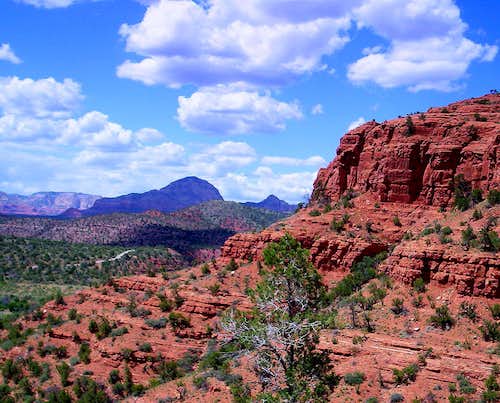 Spring and fall are the best and most popular times to climb.
Lightning and flash flooding (associated with thunderstorms) pose a threat throughout the summer months.

In winter, footing can be treacherous due to ice and snow clinging to rocks
on the routes. 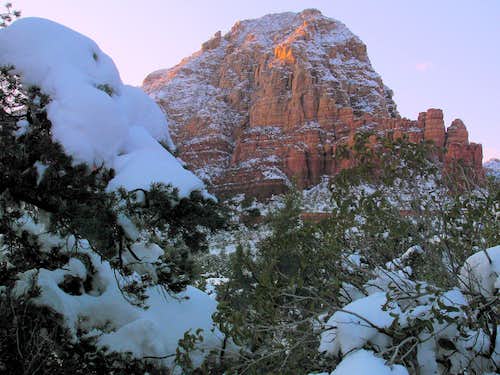 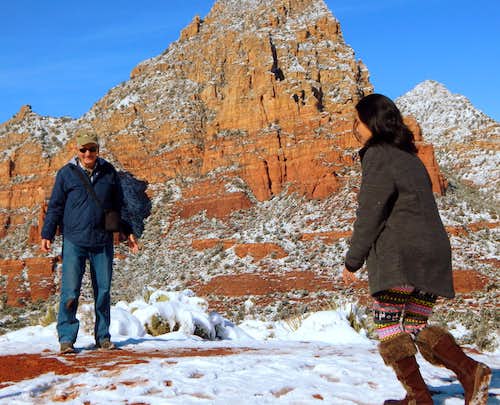 Nearby camping in the Coconino Nat'l Forest :