"They are deep, rich and variegated, and so luminous
are they ...

that light seems to glow or shine out of the rock than to be
reflected from it." 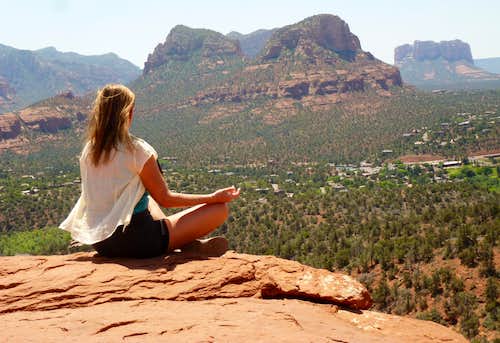 If you arrive in the Village of Oak Creek (VOC) via Hwy 179 south of Sedona,
you'll be visually awestruck by Courthouse Butte to the east,
and will most certainly have 'YOUR DAY IN COURT.'


Neighboring Bell Rock was named by Abraham James, who was Sedona's first
settler in 1879. Courthouse Butte had originally been called "Church Rock"
by James, but an error on a map in the 1880s resulted in the inadvertent
name change. 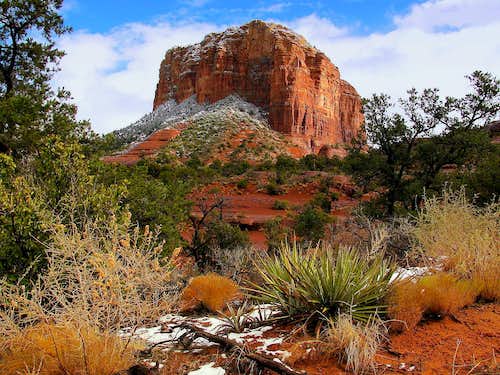 Courthouse Butte was first climbed by Harvey Butchart in 1954, as told by Elias Butler and Tom Myers in
Grand Obsession: Harvey Butchart and the Exploration of Grand Canyon.

Courthouse Butte is one of Sedona's most prominent and beautiful formations. The easiest route ascends the east end in a bowl on the south side.
Most of the climb is 3rd and 4th class. One section about 2/3 of the way up is a 30 foot section of 5.6 climbing requiring ropes.
Above the roped section it's a 2nd and 3rd class scramble up loose rock. The summit is on the eastern end of the butte.

Coyote Tower rises on the SE corner of Courthouse. It's not a freestanding spire, as only the top hundred feet are detached from the
main body of Courthouse Butte. 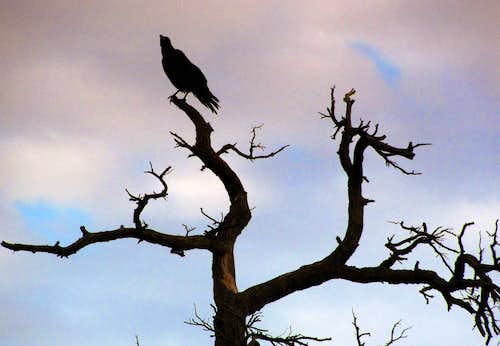 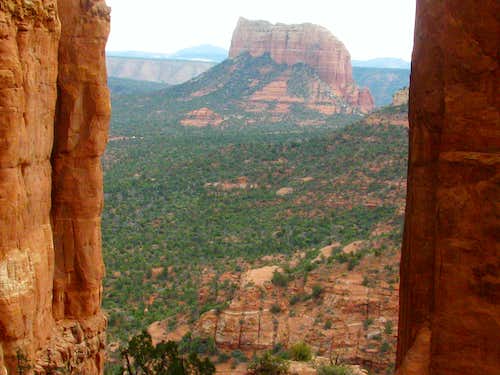 Courthouse from the Second Saddle of Cathedral Rock

Some brave climbers have been known to "span the gap" between Coyote Tower
and the SE face of Courthouse Butte. Coyote Tower "itself" is rated 5.10
with six pitches of great sandstone.


There's also a prominent bowl on the east side of Courthouse Butte,
remaining in shadow most of the day. The east bowl route has a 40'
section of Class 5 and the rest is Class 3 & 4. I think it's going to rain today.

In May 2006, after 83 years of operation out of the Brewer
Rd. Ranger Station in Sedona, the Red Rock Ranger District relocated to a
new (5,000 sq. ft.) Visitor Contact Center on a site south of the Village of Oak Creek (VOC) along Hwy 179.

Wear a helmet. Climb softly, and back up all anchors.

Most of all, respect the land and the remnants of Native American artifacts and traces of previous habitation found on some routes. ) 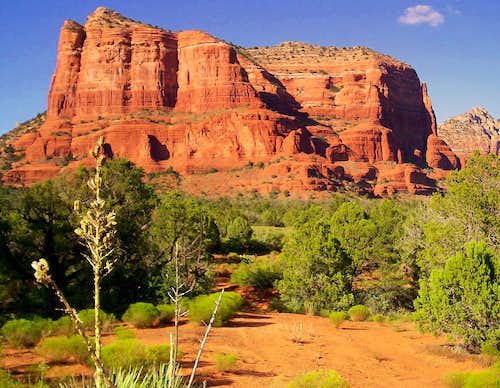 Courthouse from the SW, with Coyote Tower at far right.

Spring and fall are the most popular times to climb. Summer rains soak the sandstone making it more dangerous to climb. It is recommended not to climb for a few days after a rain.

Patches of transparent ice form on some routes during winter months. 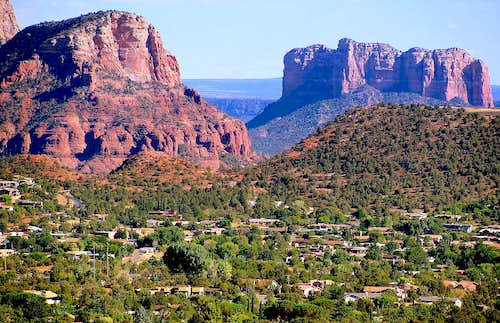 Courthouse (right) from the North, looking over Sedona

Nearby campgrounds in the Coconino Nat'l Forest :