El Brujo (Spanish for 'the sorcerer') is a volcanic dome located north of Santa María Coatepec, in Puebla state in east-central Mexico. It is an asymmetrical cinder cone, with the craters and major summit (2930 m a.s.l.) located on the steeper southern tip of the mountain, while its northern slopes provide a rather gentle ascent. It is classified as a malpaís ('badland'), a word that describes relatively recent ash, lava or debris flows that aren't suitable for agriculture. This has allowed most malpaíses to retain its original ecosystem, often consisting, like El Brujo, of xerophile grassland and pine-oak forest. After in years prior some idiots set large portions of the mountain on fire in order to collect wood or make room for grazing, El Brujo is now officially protected under the scheme of Pago por Servicios Ambientales. 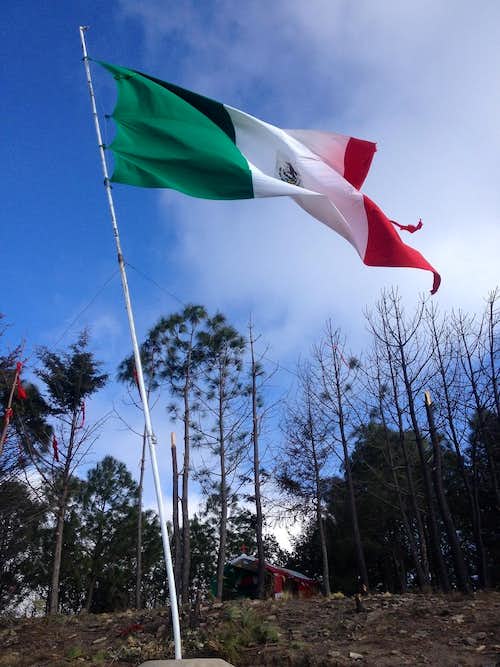 A flag of Mexico at the summit of El Brujo. In the back, a Catholic chapel. See that the trees on the right side succumbed to the arsons that have repeatedly struck the mountain.

From the south, El Brujo can be ascended pretty easily. It allows an elevation gain of well over 400 m within an hour's hike. It also serves as a nice training for nearby Pico de Orizaba, as well as for higher mountains with extensive sandbanks like Malinche or Nevado de Colima.

First you must reach San Salvador el Seco, which lies on federal highway 140, north of Acatzingo. There you'll find two somewhat confusing signs to turn right on the road to Ciudad Serdán. You better use GPS here or ask a local. After leaving the city behind, you’ll see El Brujo on your left. Arriving in Santa María Coatepec, turn left on Calle Vicente Guerrero (see Google Street View for reference).
After a couple of blocks, the paver ends. Although you can drive further uphill, I'd recommend you to leave your car here, as the road gets progressively narrower. Anyway, bear in mind that some locals in rural Mexico will report unknown and perceivedly abandoned vehicles to the police, so I would advise you to leave a visible note inside the car, something like "Subimos al cerro" ('Went hiking') stating date and time.

The route is pretty straight-forward: Follow the same street uphill and voilà. Pretty soon you'll notice a smaller path that leads into the forest. You can take that one, but consider that it leads into a gully you'll have to scramble out of further uphill — but the soil is poorly consolidated and breaks away pretty easily, so you might risk a fall. If you decide to continue on the street, which soon turns into a sand flow, you'll be safer — but, you know, sand. 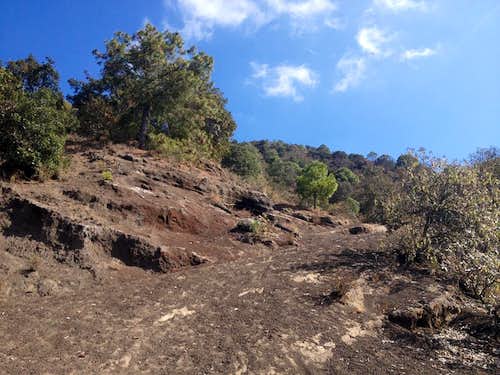 El Brujo trail
On the upper parts, there seem to be multiple ways to the summit. For your own safety, I advise you against taking the steeper tephra flows. Also, for ecological reasons, please refrain from leaving the paths, as the mountain's forest is still recovering from the disastrous fires it has suffered in previous years.
The last couple of meters consist of a cedar alley which leads to two icons on the summit, probably put there in the hope that they will keep future arsonist from further devastating the forest: a Mexican flag and a chapel dedicated to the Virgin of Guadalupe. Let's hope they prove effective.
If you are underwhelmed by the short hike, you can continue on the ridge counterclockwise and descend into the craters. Also, if you're feeling adventurous, you can descend eastwards and visit the nearby Laguna Tecuitlapa, which is the smallest of the region's characteristic maars.

El Brujo lies within the Oriental Basin, an endorreic valley in the easternmost part of the Trans-Mexican Volcanic Belt. Being on the rain shadow of a massive volcano wall (Cofre de Perote-Tembladeras-Pico de Orizaba-Sierra Negra), El Brujo is rather arid, a characteristic that has prevented its loose leptosols from being eroded, i.e. washed into the valley.

The pine-oak forest of El Brujo is less dense in shrubs than some counterparts of wetter climates like nearby El Tintero, for example. Some plants you can be certain to see are Indian paintbrushes (Castilleja tenuiflora), pointleaf manzanitas (Arctostaphylos pungens), tepozans (Buddleja cordata) and madrones (Arbutus spp.). The more arid northern peaks are covered in shrubs and herbs of drier climates like Mixtec yuccas (Yucca mixtecana), century plants (Agave spp.) and prickly pears (Opuntia spp.). As for animals, I have seen spiny lizards, some singing birds and a lot of rabbit holes, and it's plausible to assume that there might be ring-tailed cats (Bassariscus astutus) and maybe even coyotes (Canis latrans).

El Brujo can be climbed year round. During the wet season (May to October), be sure to check the weather forecast, especially if you plan on staying there in the afternoon. 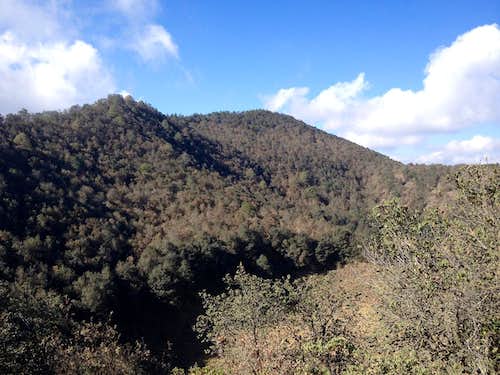 The southern summits from across the craters.

I wouldn't recommend you to camp there, as the mountain is pretty exposed to cool wind gusts.

* Topographic map of San Salvador el Seco (PDF): El Brujo is on the left side of the map.
* Cerro El Brujo on Wikiloc: I reached the summit and went around the craters a bit. It's worth saying that at least from this route no complete ridge tour is possible.