El Pinal (Spanish for 'the pine wood') is located between the towns of Santa Isabel Tepetzala and El Rincón Citlaltepec, in the state of Puebla in South-Central Mexico. At 3280 m above sea level, it lies considerably higher than its twin El Tintero (2920 m), but it is also a lot smaller than nearby La Malinche volcano (4420 m). For that reason, El Pinal is relatively unknown, depite being among the country's top 40 major summits.
Still, El Pinal makes well for a half-day hike. It is the perfect place if you want to enjoy a beautiful and excellently preserved Transvolcanic oak-fir forest and complete a moderately demanding trail without exposing yourself to the herds of La Malinche or Nevado de Toluca peakbaggers. 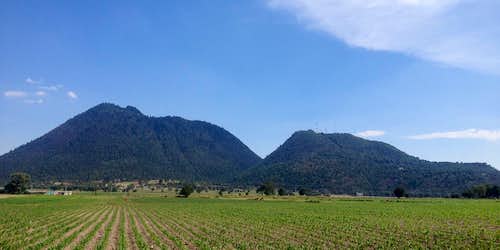 From Puebla or Veracruz, take highway 129 (Amozoc-Teziutlán-Nautla). Around the 21 km mark, turn southeast —right if coming from Puebla— on highway 136 (Huamantla-El Rincón). Alternatively, you can take highway 140D, which is a scenic toll road in very good conditions. Take the Ixtenco exit and continue on Highway 136, crossing the town of Zitlaltepec de Trinidad Santos.
In El Rincón, you will see a school and a temple on the left side, before the street leads into some sort of town/market square — see Google Street View for reference. Here you have to turn half-right. Drive a couple of blocks uphill until the paver ends. The trail begins here. Bear in mind that some locals in rural Mexico will report unknown and perceivedly abandoned vehicles to the police, so I would advise you to leave a visible note inside the car, something like "Subimos al cerro" ('Went hiking') stating date and time.
Northeastbound (Teziutlán, Perote etc.) intercity buses departing from Puebla CAPU bus terminal can leave you at the highway junction, from where you'd have to walk some 3 km to the trailhead. I have no idea how much the buses cost or how long they take, but I'll update this info if I find out someday. :)

Close to the trailhead

The trail is pretty straight-forward. Continue on the street, which soon turns into a dirt road. After the last houses, there are many footpaths that interweave as they lead into the oak forest. If you take the widest one, you will soon reach a glade that seems like it used to serve either agricultural or recreational purposes, but is now abandoned. You must keep your left here and then rather right above the glade. You can really trust your instinct, as long as you keep the saddle between the higher left peak and the lesser right peak in sight.
At around 2950 m.a.s.l., after 300 m elevation gain, the oaks start to make way for a cooler and more open fir forest. At this point, you could really just start ascending cross-country, although it can get pretty steep at some points. Alternatively, you can reach the saddle and then look for a path on the left. Between 3100 and 3250 m.a.s.l. is the steepest part, after which your reach a flat area where the locals have built a chapel. This place near the summit is also suited for camping, although it's also kinda dirty with tin cans and plastic bottles, sadly.

The summit is located just east of this area. It isn't really a peak but also kinda flat, so it's easily overlooked. 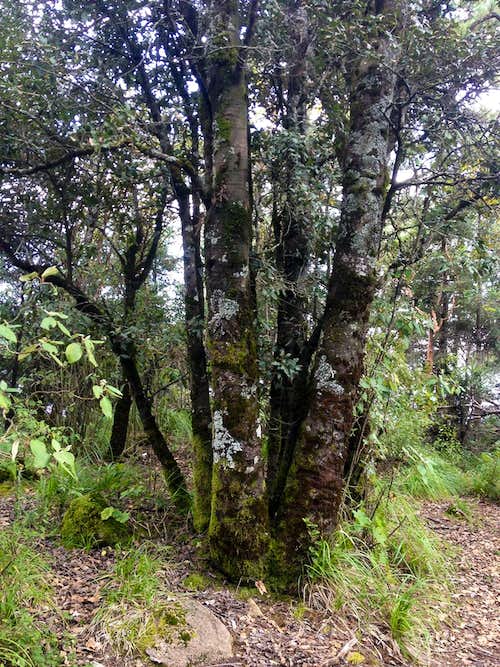 El Pinal's (anticlimatic) summit
Disclaimer: There are other paths that may or may not lead uphill. A notable one goes around El Pinal clockwise. The first time I went there, I took that path and decided to climb cross-country after about an hour of minimal elevation gain. I then had to push myself through a dense shrubland which wasn't exactly a delight to cross. Also, on the way down the soil was full of dead leaves, and the terrain was so steep that I slid multiple times. So, if you want to take any other route than the one I described, be aware of the dangers.

The typical ecosystem for the region is the so-called Transvolcanic pine-oak woodland — see the Wikipedia article. What makes El Pinal different is that there are very few pines, even though the mountain is named after them. The dominant tree species are the netleaf oak (Quercus rugosa) at the lower parts and the sacred fir (Abies religiosa) above ± 3000 m. There are also some madrones (Arbutus spp.; mainly A. bicolor) and tepozans (Buddleja cordata). The shrubs and herbs consist mainly of sages (Salvia spp.) and groundsels (Senecio and Roldana spp.).
There are also quite a few edible mushrooms, like morels (Morchella esculenta) and bolets (Boletus edulis). In fact, an article about the mountain's edible fungi is one of the only available studies about any aspect of the mountain — see "External Links". 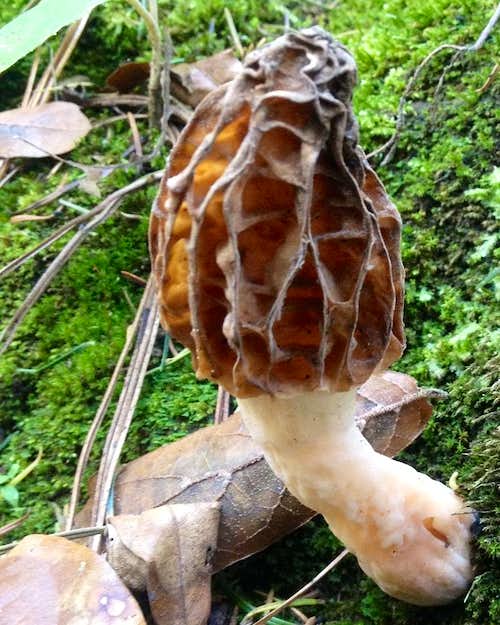 There is no restriction of any kind. Near the summit is a flatter area suited for camping which has been mentioned before.

Camping area near the summit (c. 3260 m.a.s.l.)
El Pinal can be climbed year round. During the wet season (May to October), the mountain tends to attract rain clouds which start to form at around 2 pm. Be sure to check the weather forecast, especially if you plan on staying there in the afternoon. Also, it may snow on rare occasions during the winter. It's a fairly rare occurence, but again, check the weather forecast in order not be get caught in a storm.