El Chichonal (also known as El Chichón) is a little known Volcano located in an isolated part of northern Chiapas, in southeast Mexico. It is part of the Chiapanecan Volcanic Arc.

Prior to the great eruption in 1982, the crater was filled in by a heavily forested lava dome which was then reported to have active fumaroles. That was until March 29th, April 3rd, and April 4th 1982 when the Volcano erupted sending out a huge ash plume into the sky and emitted pyroclastic flows into surrounding areas killing about 2000-3000 people living within it's proximity.

After the 1982 eruption the pre-1982 lava dome had completely disappeared leaving behind a 1km wide crater which today contains an acidic crater lake and some active fumaroles. 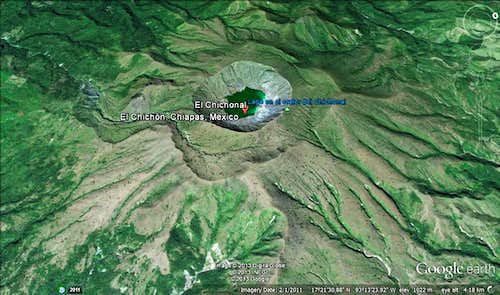 In order to reach El Chichonal you must first drive to the small town of Ixtacomitan which can either be reached from Villahermosa to the north, or from Tuxtla Gutierrez or San Cristobal de las Casas to the south. When you reach Ixtacomitan, then from where the main road curves at the bottom of the hill you must take one of two roads that leads away from it onto the remote village of Chapultenango, but be warned as there is no sign that indicates where Chapultenango is. If you are on the right road then it should lead downhill to a river where you must cross the bridge after which you will drive on a few miles of winding roads.

After driving for a few miles uphill and downhill on winding roads you will eventually reach the village of Chapultenango where you must turn right from the main street and find a road that leads uphill to the top part of the village where you will find a dirt track. You must take the dirt track where you drive for a while until you reach the end where there are farmlands and a handful of remote houses in which you should find a parking spot in an area called Colonia Volcan. It is in Colonia Volcan where you ask around for a guide though it might also be possible to find one in Chapultenango too.
It's also possible to reach Chapultenango using local buses but unfortunately, I don't have any information on it. However, if you speak Spanish then some locals might help you with information on buses to Ixtacomitan and Chapultenango. 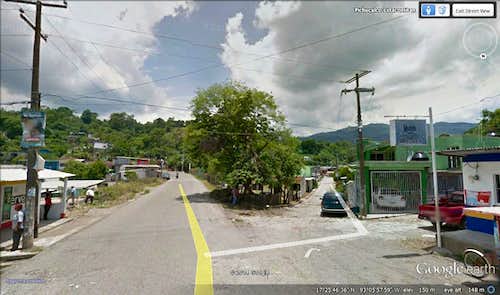 The turnoff for Chapultenango from Ixtacomitan while coming from the north. 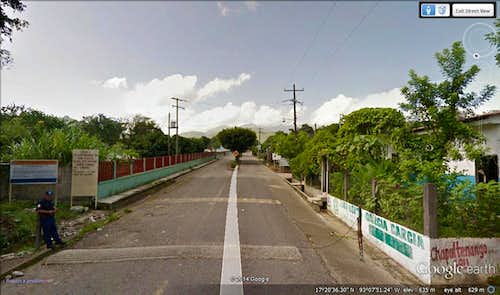 The entrance to the village of Chapultenango. 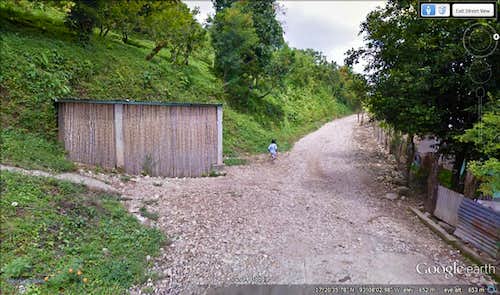 At the top end of Chapultenango is where the dirt track to El Chichonal begins.

I would firstly recommend that you hire a local guide or you might end up getting lost. At the time I was there we were charged 200 Pesos for the guide.

1. As you enter the field there are 2 orange coloured streams which you must cross before you walk gently uphill.

2. In the next section as you walk progressively uphill across open fields on a track you will eventually come to a lahar gulley.

3. Before you go down into the lahar gulley you have to squeeze behind the fence post then making your way down. Be careful you don't fall down the rocks.

4. After walking for a relatively short distance in the lahar gulley you'll find a route up which takes you through a narrow passage where you'll eventually reach the other side of the gulley.

5. You have to make your way up the track until you reach the top.

6. As you reach the top, the ground should level out a bit where hiking will be made easier but you continue up the track until you reach the crater rim, the final uphill part.

7. As you make your way uphill to the crater rim for a short distance to the top there in front of you should be the crater as seen in my video below.

ADVICE: Almost the entire hike is over open ground, wherever you do find shade take a break from hiking as the hot sun can make you suffer if exposed too long.

Unless you speak Spanish or are in the company of a Spanish speaking person, you will have difficulties getting by as there are hardly anybody in the area who speaks English though you might be lucky to come across one who does but don't expect it.

The chances are, the locals might insist on you hiring a guide as you are entering their private land.

Camping might be possible but remember that you could be going on private land. Lodging is possible in the village of Chapultenango but you may need to ask the locals for information.