Las Derrumbadas are a pair of rhyolitic volcanoes in the municipalities of Guadalupe Victoria and San Nicolás Buenos Aires, in the State of Puebla in east-central Mexico. At 3480 and 3420 m a.s.l., both summits lie considerably lower than the three nearby stratovolcanoes that form the eastern limit of the Oriental Basin (Cofre de Perote, Pico de Orizaba and Sierra Negra). Still, their location within the flat center of the valley warrants a decent prominence that makes up for somewhat demanding ascents. Many other factors, like their remoteness, their loose soil, their deep gullies etc., mean that the upper parts are mostly free from serious disturbances, so that you will encounter a beautiful forest that is as virgin as it gets, at least in central Mexico.
Officially, both domes are called Cerro Derrumbadas. This name comes from derrumbe – Spanish for 'stonefall' or 'collapse', which refers to its poorly consolidated and easily eroding soil. To distinguish them from each other, the locals use the informal names of Derrumbada Roja or Derrumbada de Fuego (Red or Fire Derrumbada) for the bigger southern dome, and Derrumbada Azul or Derrumbada de Agua (Blue or Water Derrumbada) for the lesser northern dome. Sometimes, a third mountain, nearby cerro Pinto (3000 m a.s.l.), is included in the complex under the name of Derrumbada Blanca (White Derrumbada). 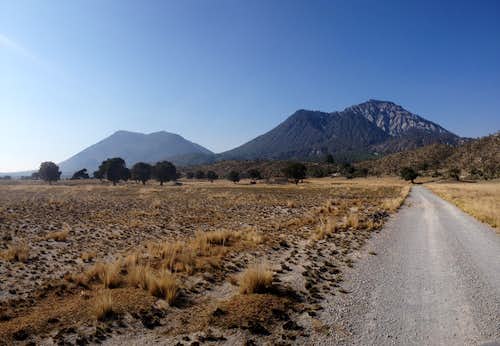 Las Derrumbadas are bordered from southwest to north by federal highway 140 (Tepeaca–Veracruz), between the towns of San José Zacatepec and San Luis Atexcac. From Puebla, Perote or Xalapa, take this highway. From the south or southeast (Córdoba or Tehuacán), go to Tlachichuca and continue northbound to Guadalupe Victoria, then take the westbound road to Atexcac. There's a third option: Coming from Huamantla, take highway 136, which crosses Lake Totolcingo before leading into highway 140 at Zacatepec.
As I will be posting different routes over the time, I will post the exact route to the trail heads on the corresponding pages below.

There are no restrictions or fees of any kind. Bare in mind, though, that the ridge is surrounded by mines that extract construction materials. As people in rural Mexico are somewhat suspicious of strangers, I would advice you to a) approach people you find on your way, stating your intentions; b) leave a visible note inside your car, something like "Subimos al cerro" ('Went hiking') stating date and time; and c) pay attention that you don't block any accesses or wide turns.
Camping is possible, for which I would recommend a nice and mostly flat part of the Derrumbada Roja forest at about 2900 m a.s.l., or else its summit.
Also, be aware of the fragility of the soil. Derrumbada Roja is a volcano whose current activity is limited to a few fumarolic fields with steaming holes. Nevertheless, the volcanic rocks the domes consist of are very fragile and erode pretty easily, and may thus cause landslides at the slightest provocation. Remember what Las Derrumbadas means? Yup. 'The stonefalls'. 'The collapsed ones'. So, for your own safety, don't explore the gullies, don't stand near cliffs and DO NOT attempt to climb and/or boulder any rocks. 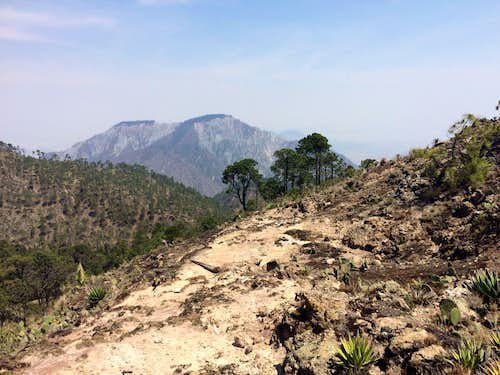 Fumaroles near the summit of Derrumbada Roja, with Derrumbada Azul in the background.

The main factors influencing the Derrumbadas ecosystems are: their minimal soil; their location within a semiarid basin; their altitude and prominence that attract moisture and limit temperature; and their multiple deep gullies that provide abundant shadow and microclimates.
In general, the sunnier western, southern and eastern slopes hold xerophile grasslands sprinkled with trees of semiarid climates, like alligator junipers (Juniperus deppeana) and white tepozans (Buddleja cordata), as well as succulents from the cactus (Opuntia spp., Mammillaria spp.), asparagus (Agave spp., Yucca spp., Nolina parviflora) and stonecrop families (Sedum spp., Echeveria spp.). The cooler gullies hold typical transvolcanic pine-oak woodlands, where many oaks have been attacked by Phoradendron spp., a genus of semiparasitic mistletoes, and excessive Spanish moss (Tillandsia usneoides). The shady northern slopes above 3000 m are home to semicold fir (Abies religiosa) forests with presence of madrones (Arbutus spp.) in shrub form, groundsels (Roldana spp.) and multiple types of grasses and mosses.
The fauna doesn’t really differ from the surrounding natural places. You will typically see singing and predatory birds, spiny lizards (Sceloporus spp.), probably a cottontail rabbit (Sylvilagus cunicularius) or two, plus feces of carnivores that probably belong to ringtail cats (Bassariscus astutus). Based on the ridge's relative isolation and lack of serious disturbances, it is safe to assume that skunks, white-tail deer and coyotes also inhabit the zone. 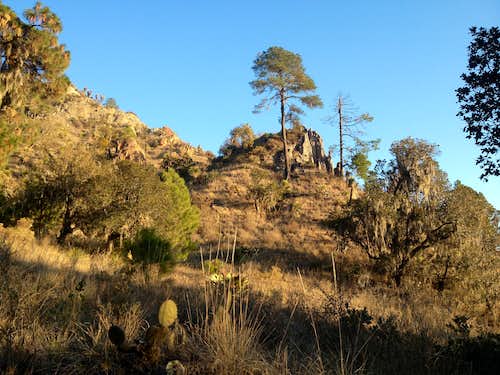 The xerophile shrubland of the lower parts of Las Derrumbadas will typically contain a few pines, oaks and junipers, as well as succulents (prickly pears, century plants etc.) that have adapted to lengthy dry seasons. 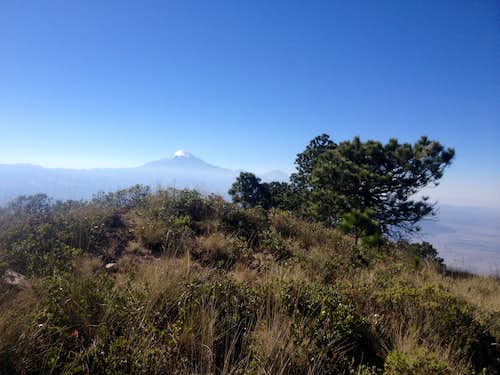 Derrumbada Roja summit, with Pico de Orizaba in the background.