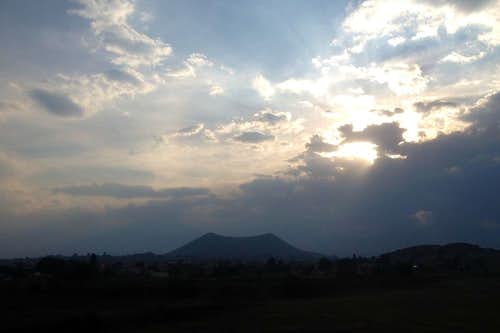 Cerro Tecajete from the northeast. The silhouette of Popocatepetl is barely visible in the back.
Cerro Tecajete (Nahuatl: tlecaxitl, 'brazier' or 'stove') is located just west of San Miguel Papaxtla, in the state of Puebla in South-Central Mexico. It is one of the most prominent elevations between the Paso de Cortés and the metropolitan area of Puebla. As such, it is visible from most points of the valley, and its unmistakable silhouette reminds us of its nature as a former volcano.
For decades, the Tecajete has been extensively mined for its tezontle, a volcanic rock used in construction. As a result, the eastern slopes which face Puebla have disappeared almost completely, exposing deep layers of red sand. Still, a rather short hike to its crater and two summits takes you through a beautiful pine-oak forest which is typical for the better preserved areas of the Mexican highlands.

The Paso de Cortés road connects the towns of Amecameca (State of Mexico) and Cholula (Puebla). Between Nealtican and Santa María Acuexcómac (around the 9.2 km mark on the Puebla side), take the exit to Papaxtla. Once in town, take the first to the left until it merges with a red gravel street. The trail begins some 120 m later, on the left side. 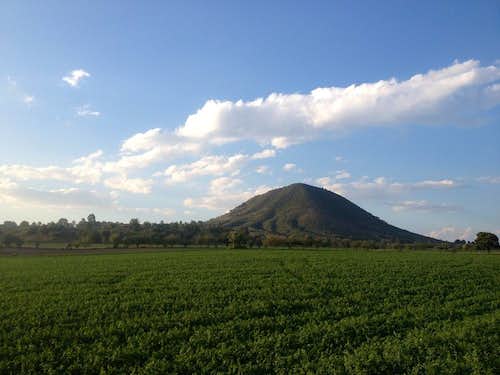 Cerro Tecajete from the Paso de Cortes road, near the Papaxtla exit.
Public transportation departs from San Pedro Cholula (at the corner of 6 Poniente and 5 Norte), but only lets you at the side of the Paso de Cortés road. By foot, it is about half an hour to the trail head from there.
I've also cycled to Papaxtla from Cholula. Although the route provides an elevation gain of over 100 m, the ascent is pretty smooth. I've chained my bike at the trail head, hidden between some yellow trumpetbushes. Anyway, there usually aren't many people around, so I haven't really feared that it might get stolen. 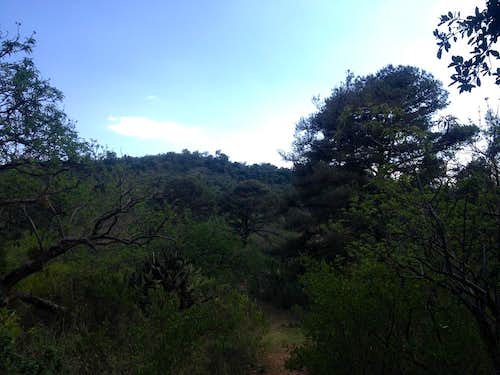 South summit of the Tecajete seen through the crater's pine forest
The trail is steep and very stony, so trekking boots are better than trainers or sneakers. Otherwise it is pretty clear and takes you to the ridge, which is the edge of the former crater, in about 20 minutes. From there you can take the longer way to the right and reach the smaller north summit (2,457 m) first, or continue straight ahead to reach the south summit (2,474 m), where the town people have built a Catholic shrine. Either way, an exploration of the inside of the former crater provides a great opportunity for birdwatching and relaxing in its dense forest. 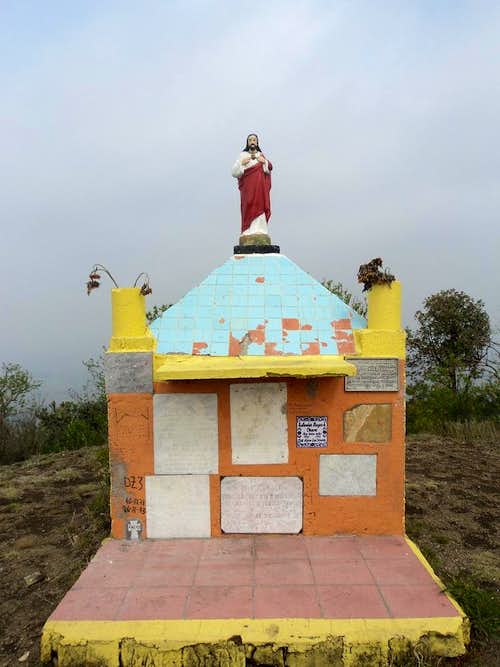 Shrine on the south summit
For those of you who want to hike for a bit longer: A small path leads down from the ridge's west side. This path later diverges a few times, but in the end they all take you down through the relatively well preserved west slopes to some fields. Cross the fields and go to the right (north), where you'll find a nice meadow. The way back from there involves a bit of bushwhacking uphill, unless you go around the hill completely. In this case, the southern route is better, as the north route traverses two more mines which aren't exactly a delightful sight. 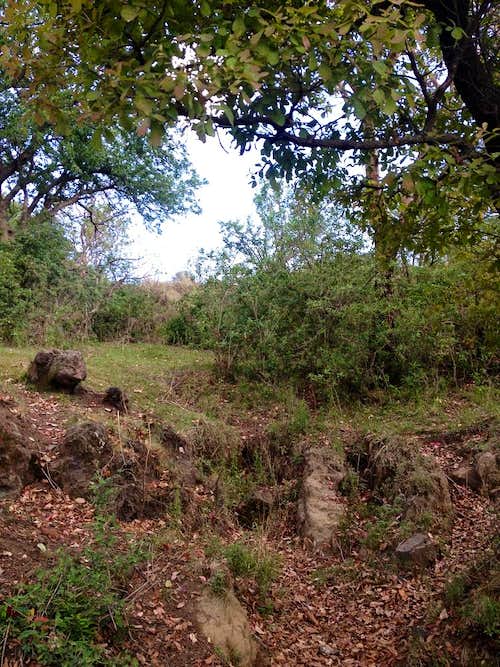 Meadow on the western slopes

There are no restrictions, but I advise you to keep away from the three mines on the east, north and northwest sides.

The hill can be climbed year round. During the wet season (May to October), be sure to check the weather forecast, especially if you plan on staying there in the afternoon. 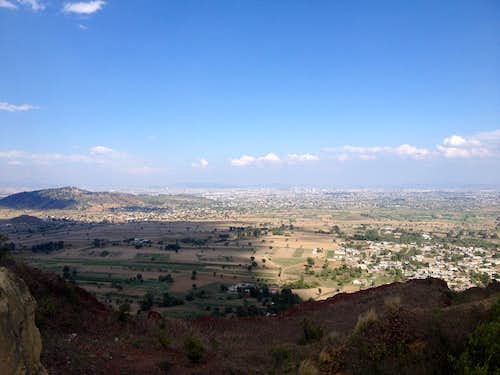 View from above the tezontle mine over the valley of Puebla. The hill on the left side is cerro Zapotecas.

I've seen rests of campfires inside the crater, which suggest that the area is suitable for camping. 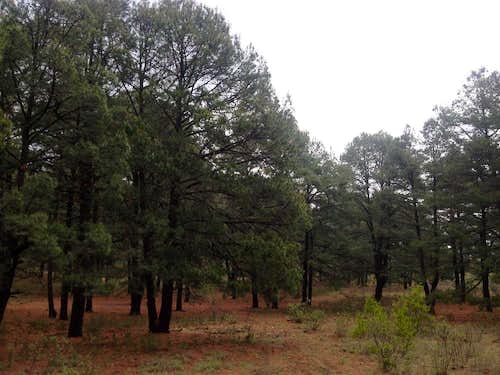