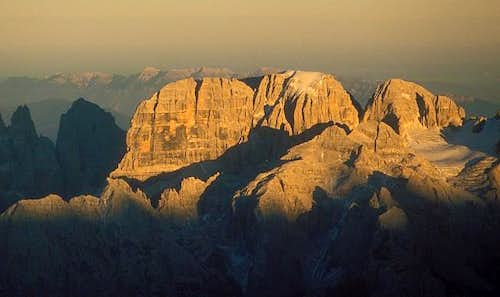 Cima Tosa is the highest mountain of the Brenta Group, which are sometimes called "Brenta Dolomites" and - at least in Italy - counted to be part of the "real" Dolomites.

The Brenta's Dolomites are for normal alpinists and hikers mainly known for its unique system of vie ferrate on which you can cross the whole group. But none of these "iron ways" leads to a major summit, so if you want to climb one of them, you will have to do some real climbing.

If you look at Cima Tosa from the west and north side, you can hardly imagine that it is possible for normal climbers to reach the summit. But the weak point is on the southeast side, where there are horizontal layers of less steep rock and much rubblestone. Cima Tosa normal route shows a "vice versa" character: the only climbing section is at the beginning of the ascent and the higher you get the less steep the terrain becomes and when you expect to be on top there is still a nice glacier cap.

There is no mountain with comparable height south of the Cima Tosa. So if you are lucky to be on top with fine weather, the summit offers a splendid panorama, especially to the glacier mountains of the Adamello-Presanella group and the lower alps around the Lago di Garda.

From the summit of Cima Tosa two ridges spread to the north and the north-east. The north one leads to the Crozzon di Brenta (3135 m), on which there are famous and difficult climbing routes.

Between these two ridges, there is a couloir ("Canalone Cima Tosa") that is a famous ice climbing route. Height of the couloir 850 m, steepness up to 50°, mostly climbed in June and also an extreme Ski descent.

The first ascent of Cima Tosa by the Englishmen Ball and Forster accompanied by M. Nicolussi, August 9th 1865, on the route that remained the normal route. (This info comes from the basic book of climbing history "Die Erschließung der Ostalpen", Berlin 1894. There the author Karl Schulz writes that there was no sufficient proof for an earlier ascent by the Italian G. Loss from Cles on July 19th 1865. In these times before the first world war Italian and german people did not like each other well and I have found many unfair statements of germans in old books. This could be another as G. Loss is often named as the first climber. Any historic info about this fact is appreciated).

Getting There and huts

summit view to the south

The nearest major cities are Bozen/Bolzano in the north east and Verona in the south east. Approach by car via the connecting motorway. First you have to decide whether you want to start on the west side or at the east side of the Brenta group.

starting point is Molveno (864 m) at it's beautiful lake. Direct ascent is 4,5 h but perhaps jeep transport is possible to Rif.Croz dell'Altissimo. From there 3 h to Rifugio Pedrotti Tosa.

thanks to gabriele! The numbers refer to the basic Italian guidebook "Dolomiti di Brenta - Gino Buscaini - CAI-TCI". Due to copyright reasons I don't want to post the scans of the referring pictures here, but - as long as we have suitable pictures - draw the lines myself. 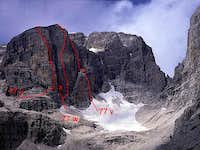 summer to fall: The Brenta's Dolomites are a very famous hiking area. so huts are overcrowded normally in August. Most huts close already mid-September. The best time is, therefore, the last week of opening (2nd week of September, or perhaps the week before). Before the opening of the huts (June 20th) you will expect much snow on the routes.
spring to early summer for the ice couloir

The Brenta's Dolomites are notorious about the fog that occurs even on a very fine day about noon.

short trip reports about ascents of the north couloir are sometimes posted at bergtour.ch

camping in the villages

Also, there is a two map set with scale 1:35000 about Adamello-Brenta -National Park available at local shops and Tourist Info. One map is about Brenta-Group and the other about Adamello-Presanella-Group. price about € 2,50 (info from HeMa)

book in Italian:
The "Guida dei monti d'Italia" (published by CAI/TCI) series includes the volume "Dolomiti di Brenta" (1977-1982, in italian), with maps, photos and full routes description. Should be still available. May be found in bookshops (Madonna di Campiglio, Pinzolo, and particularly by Libreria Disertori in Trento)

for the two huts

links are fixed - thank you for your note!