The cirque de Gavarnie is a large rock amphitheater, situated at the border of France and Spain. The main valley is on the french side, with most of the peaks on the French/Spanish border. The large limestone walls rise 1500m vertically from the bottom of the cirque (at about 1700 m) to a height of over 3200m.

The area has a rich geological history, which is reflected in the twisted and layered structure of the cirque's walls. Together with a large cascade of over 400m they draw thousands of tourists each year to the nearby town of Gavarnie.

The cirque is bordered by several peaks of over 3000m, many of which can be easily climbed. The Gavarnie / Ordesa massif is also the highest limestone massif in Europe. The highest point being the Monte Perdido (3353m).

You can also click on the thumbnails below to see more of the surrounding summits:

One remarkable feature of the cirque is the Breche de Roland (2807m). This is a large breach in the upper layer of the cirque. It is reached from the Col de Tentes (see below) in a 2 or 3h walk. The walls of the breach are remarkably thin, but over 100m tall. From the brèche you can see far into Spain, with it's grand canyon like Ordesa National Park.

The legend goes that a hero named Roland, threw his sword when he was mortally wounded in a battle against the Mores. When it hit the rock it created this doorway to Spain.

The Brèche de Roland is a part of the classical route to Monte Perdido from Gavarnie (known as such a route since the 19th century, shortly after the north face/Tuquerouye route was left aside because of its difficulty). You can reach the Brèche from Gavarnie by climbing the Echelle de Sarradets, from the bottom of the Cirque de Gavarnie.

Click here for a more detailed story about Roland and his sword!

The tourist town of Gavarnie is the starting point for many easy trails leading through the lower parts of the cirque. Also if you want to climb the vertical walls from the bottom of the cirque, this is your starting point. The famous 2h walk to the bottom of the cirque starts here. Despite the fact that this walk is almost level, "lazy" tourists can rent donkeys or horses to carry them. In the mid-summer months this means basically everything in the valley smells like horse-poo...

In the early days, Gavarnie was a shepherds town, and an important passage point if you're travelling between Bigorre (France) and Aragorn (Spain). At the end of the 19th century some village peasants became the first Pyrenean guides.

By car, getting to Gavarnie is easy. That is, if you're approaching from the french side. Coming from Toulouse or Tarbes, drive in the direction of Lourdes. From Lourdes, follow directions to Luz-St-Saveur, from there on there should be signs to Gavarnie or Gedre. There is only one major road leading there, on the way you will find many campings and hotels.

To help preserving the mountains, you can leave your car in Lourdes, there are regular buses from here to Gavarnie. This is of course highly recommended!

Coming from the Spanish side, there are no direct roads to Gavarnie (the valley Lourdes-Gavarnie ends at the vertical walls of the cirque). You can ofcourse walk from the Ordesa National park through the Breche de Roland or the port the Boucharo (Puerto de Bujaruelo in Spanish). Starting point for this is the Spanish town San Nicolas de Bujaruelo.
See also the mt Perdido page, as this mountain is part (the highest even) of the cirque's mountain range.

There is a good asphalt road up the col de Tentes , on the east of the cirque. It ends in a parking lot. A short walk from here you'll have formidable views on the cirque. Originally, this road went on to the Port de Boucharo, intended to connect with Spain. The Spanish however failed to build, or negelected, their road. Now there's only a hiking trail leading in to Spain.

Also, this is usually the starting point for hiking to the Refuge des Sarradets ou de la brèche, or further. You don't have to cover much altitude meters to get to the refuge when starting from the Col de Tentes. (It is also possible to get here when starting from the bottom of the Cirque, but you need to overcome a much bigger height difference. This route is prettier though, so it is a bit of a trade-off)

From the refuge you can walk up to the Brèche de Roland, and over it, to the Spanish side. This is the back side of the cirque, with lots of trails, and nice views into the Spanish Ordesa park. There are several 3000m peaks in your grasp from here, for example le Casque (3006m) or le Taillon (3144m).

This is a mountain pass to the east of the cirque. It has a refuge with a few places. From here you can descend to the Lac Glacé and balcon de Pineta. Basically you're on the back side (as seen from France) of the cirque de Gavarnie. You can climb most of the summits that make up the vertical walls of the cirque from this side. From the ref. de Tuquerouye those are les Astazous. For the other summits you'll first have to pass through the Col de Cilindre, then you can climb for example le Marboré and monte Perdido.

See also the map for comparison with above descriptions.

With special thanks to rbartolome.

The Cirque de Gavarnie is one of the great places in the world to ice-climb and the best in Europe away from Norway. The major drawback compared places like Norway, Canada or Italy is that the ice climbing conditions in the Pyrenees are not reliable so you are taking a risk with your holiday. Gavarnie is often not in condition or if in condition is dangerous because of warm fronts moving in. For one of the great natural sights the world has to offer its worth taking the risk. The best conditions are generally the end of January to the end of February. Following snowfall there is also a grave risk of avalanche, which has taken a few lives over the years, so take care. 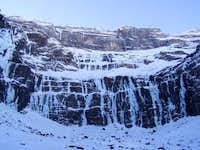 The 1st tier with the 2nd & 3rd tiers in the background

The amphitheatre of Cirque de Gavarnie is roughly divided into three tiers. Most ice-climbers are happy with a route on the first tier which is between 250 and 300m high. These first tier routes offer six or seven pitches of pure ice which are some of the best in Europe. Climbing beyond the first tier will require excellent fitness along with additional seriousness although not necessarily technical ability. Trying to climb all three tiers is a serious undertaking with over 12 hours climbing and a further 4 to 5 hour descent to boot.

Due to the open architecture of the Cirque de Gavarnie, routes with vertical ice are clearly evidence as are routes that cross rock and require rock protection. An entry level ice route has ice up to 75°. Before the cwm, just opposite the Hotel de la Cirque, are some practice waterfalls which range in steepness up to 90°. Top end routes weigh in at WI 6. There are only a few really technical steep routes however they are classics. The best routes include:

Overdose (WI 5+) is a 500m cascade which is undoubted the best route in the cirque and very committing. Pictured on the far left of the above photo.

Il Maestro di Ghiaccio (WI 6+) on the left side of the first tier involves two WI6 pitches with overhanging sections.

Thantos (WI 6) on the right side of Il Maestro di Ghiaccio is another classic with a WI 6 crux pitch.

Lowe, love me do (WI 6+) to the left of Thanos is a bit more modern with a bit of mixed and aid.

There are many more great routes and it pays to track down a guidebook for ice climbing in the area which is available in French and Spanish and is generally informative. With the growing popularity of the area hold-ups on routes are not uncommon due to incompetence and it pays to be in the cwm early and be first on a route.

When not in condition there is excellent rock climbing in the general area instead. There is also excellent piste skiing / snowboarding with equally good off-piste skiing possibilities at the Gavarnie / Gèdre station. There is also good mountaineering on the surrounding peaks.

All info in this section from BigLee

Though there aren't any permits required to hike or climb in the area, keep in mind that the cirque is in a national park. This means strict regulations apply to protect the nature and wildlife:

- No dogs
- No flower picking
- No weapons
- No fire
- No noise
- No camping
- Bivouacs are regulated, see 'camping' section
- No paragliding or other aerial sports
- No mountainbiking (V.T.T.: velo tous terrains)
- Dogs are not allowed in the park, not even on a leash (!).

See also the national park website, in the 'links' section.

Also, parking fees are applied for parking in the town of Gavarnie. The money is used for improving the national park.

Camping is strictly forbidden due to the fact that this is a national park.

Bivouacs are regulated :authorized when 1 hour's walk away from park boundaries or any road access. Tents must be taken down from 9 am to 7 pm.

(summarized from a discussion with brenta)

Roland, a.k.a. Hruodland, a.k.a. Rotla, was a real person: Charlemagne's nephew and one of his seneschals.
He died in 778 in the Battle of Roncesvalles (a.k.a. Ronceveaux), an ambush by Basques which occurred near Luzaide-Valcarlos (more than a sword's-throw from Gavarnie).
His death, and his sword, became legendary centuries later thanks to the Song of Roland, which was not concerned with historical accuracy. That ballad depicted the Sarassins (often called Moors) as his attackers. In one scene, Roland tries to break his sword Durendal (to prevent its capture) but only succeeds in demolishing the rocks he swings it against. The sword's indestructibility can be seen as a symbol of Christian invincibility.

this is a very interesting link about ice climbing conditions in Gavarnie.(spanish)http://www.infohielo.com/asp/condicporzona.asp?Zona=Gavarnie

Could you attach these 2 to your page ? ;) Thanks ! Eric (currently in the process of rewritting the Bigorre)

Yes, thanks for pointing this out! I actually didn't know Gabietous was connected to the Gavarnie chain as it lies a bit to the back, but given that you can climb it from the col des Tentes, through the breche, that makes it more than suitable to include. Cheers, Rick

Yes, true, but I also think it does make sens as it belongs to the "Gavarnie club" :)