Nevado Illampu 6368 m is the Northernmost of the major peaks of the Cordillera Real de La Paz, Bolivia, part of the Andes. Illampu rises majestically above the quiet provincial town of Sorata. It is also the fourth highest mountain in Bolivia and one of the most impressive, located just North of Ancohuma, only slightly higher (6427 m). When seen from neighboring Ancohuma, Illampu looks like something out of the Himalayas. Nevado Illampu is considered the most difficult peak above 6000 meters in Bolivia.

Illampu  rises above the wee village of Sorata and is normally climbed from here in a round trip of five or six days. This is the easiest route, by the Southwest Ridge, rated AD (Fairly Difficult), with snow slopes up to 65. This standard route includes a long and steep snow/ice headwall followed by nearly 400 vertical meters of occasionally steep and corniced ridge. While often climbed or attempted in combination with the slightly higher but technically easier Ancohuma, Illampu is more than deserving as a destination in its own right.

The summit was first climbed on June 7th 1928 by the German alpinists Hans Pfann, Alfred Horescowsky, Hugo Hortnagel and the Austrian Erwin Hein. It is considered to be the most difficult peak to climb among all of Bolivia's 6,000. The easiest route is on the South-East side and is classified as AD with snow slopes up to 65 degrees.

As for Ancohuma, the base for climbing Illampu is the town of Sorata. Buses or minis leave from the Cemeterio district of La Paz every hour; the ride normally takes about four hours and costs around 15 Bolivianos per person (less than $2 US) - but expect a cramped ride in a bus full of Aymara-speaking peasants carrying all sorts of produce with them, and with the roof piled many meters high with stuff (not least including your climbing gear!). That said, the bus ride should be considered as an experience of its own; plus, there is no other way of getting there, so might as well make the best of it.
The bus drops you off in the main square of Sorata, where there are a whole bunch of little restaurants and a number of hotels. I recommend the Residencial, located at the upper left-hand corner of the square (facing Illampu); you can get a gigantic room (some have as many as five beds) for 50 bolivianos, plus it's right across the street from the Association de las Guidas - the place you'll need to go to to arrange for mules and porters. Doing that is surprisingly easy, although knowing a few words in Spanish certainly helps.

There are two ways to reach Aguas Calientes, the base camp for the standard route on Illampu. One is to simply walk in from Sorata; this normally takes two days both in and out, and although the descent can easily be hiked in less than a full single day, the mule-drivers will want to make it two. Mules can make it all the way to the Illampu base camp, so if you plan to carry your gear up to high camp on your own, you can do without porters, although the guide association people will probably try to convince you otherwise. To approach from Sorata, follow the dirt road leading out of the town, which soon turns into a mule track, staying on the left side of the valley. After a couple of hours you will pass through the village of Kirambaya, around 2,900 meters. Above Kirambaya, the mule track becomes a narrow trail which skirts the left side of a deep gorge for a while, then drops down to the river, crosses it, and continues along the right side of the gorge. At about 3,900 meters you will pass Lakhatiya - the last village on the route. Here the trail splits into several paths, all of which should eventually converge in a flat, green valley that is an ideal camping spot, a little over 4,000 meters high. From here, the trail climbs gradually, sometimes along the left-hand side of the valley, aiming for the pass of Huila Khota (4,886 meters). The last couple hundred meters to the pass is a rather steep scree slope. From the pass, follow cairns down into the valley until you reach a flat, slightly swampy area that is an obvious camping site; these are the Aguas Calientes.

The other approach to Aguas Calientes, considerably more expensive, is to hire a jeep to the village of Jankho Uma, located at about 4000 meters to the north of Illampu, and walk into base camp in a single day. My understanding is that mules can be hired at the village, but I haven't been there so I'm not sure.

For routes on the south side of Illampu, use the Laguna Glaciar base camp, the approach to which should be described in the Ancohuma page.

If you want to climb both Ancohuma and Illampu in a single trip, it helps to know that it is in fact possible to move from Laguna Glaciar to Aguas Calientes in one day without returning to Sorata. This is accomplished by simply traversing the western flanks of Illampu and Pico Schultze roughly along the 5000-meter contour, aiming for an unnamed pass about two kilometers south of Huila Khota close to which is a small glacier. This rough but very scenic route follows slabs, ledges and scree slopes, and includes an occasional third-class scramble here and there. Your porters should know this route and will show you the way. 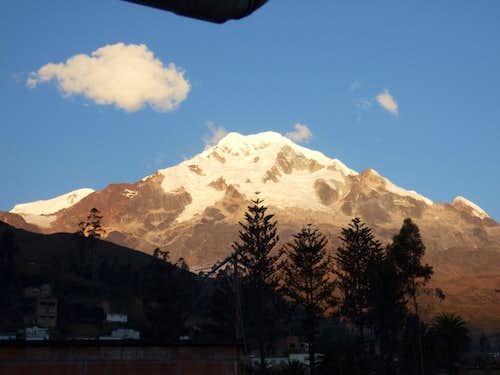 As of yet there are no regulations for climbing either Ancohuma or Illampu.

The best time to climb in the Cordillera Real is between May and September/October, when the weather is dry. Usually June, July and August are the best months anyhow. This period is the Bolivian winter, which is dry and when normally the weather is quite stable. Possible some fresh snowfalls sometimes. The wind starts in July and as the season progresses more crevasses appear in the glaciers and the penitents in the snow grow.  November to March, the temperature is higher,  but the rain will make any climb unpleasant and dangerous, since the coctail of hot weather plus rain plus snow is not very appealing.

Normally people camp at the established base and high camps, but I do not know of any prohibitions for camping elsewhere. Be aware, however, that below 4000 meters most of the land is open pasture and you might be woken up by a herd of sheep or llamas.

Aguas Calientes is a nice, relatively sheltered spot around 4600 meters (much warmer and less windy than the 5000-plus meter Laguna Glaciar). Though contrary to the name there are no hot springs of any kind, there is a beautiful stream that is probably safe to drink if you fill up above where the mules normally hang out - a rarity in South America. At the high camps, be prepared to melt snow.

I used private transport from La Paz to Sorata for my team this month. Roundtrip cost was $300 USD from Bolivian Mountains. From the look of the packed micros I'm glad we had our own vehicle. (excellent page) Cheers, Haliku