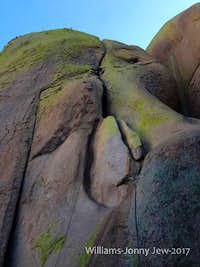 Dow leading the 1st pitch
Two of the most sought out 5.10 climbs in the Cochise Stronghold are located side by side on the west face of End Pinnacle, premier destination of the Rockfellow Group.  End Pinnacle’s west face is no doubt the most striking wall in Cochise and can be reached from either the west or the east. End Game, 5.10- is a fully bolted route located on the right center west face. Just to the right of it is the tallest feature on the west face, a wide crack that extends for over 300’ straight up before petering out onto the upper realm. This is Days of Future Passed. Climbing both of these routes in the same day would no doubt make for one of the finer outings in the entire Stronghold. The Rockfellow Group is perched high atop the Stronghold and can be reached from the official campground on the east side by hiking up a well-established trail to the right of the formations or from the west by hiking a longer, but less steep, trail from the primitive camping location below the Whale. In any regard, this summit area is as beautiful and wild as the Stronghold gets. 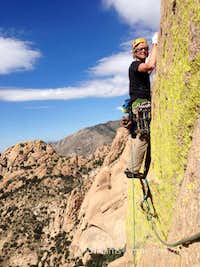 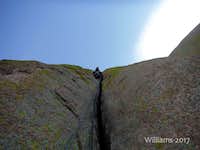 2nd Pitch
The first pitch is by far the sustained crux of the climb (5.10R) but the third and fourth pitches (5.8R) offer even more committing run out albeit at a lessor grade but also less secure climbing (face vs chimney). The 2nd pitch is uneventful. The first pitch has a variety of starting options. I chose to climb through the first two bolts of Magnus Veritas (5.10) to access the run out chimney on Days of Future Passed. This is more of a direct start than traversing in from the left and offered good climbing at the grade. The guide calls the chimney section of this first pitch PG13 but it is actually full on R (consequences) unless you brought a C4#6 which actually protects it well. If you are going to run it out as I did, facing right is critical to get that first feature slung before committing your exit. I climb a lot of chimneys in the desert. This one is full on at the grade (5.8) and more challenging than about any 5.9 chimney I have climbed. I have soloed Epinephrine’s chimney pitches for example, they are easier in comparison. The 3rd pitch is a weird one. The topo in the guide, at first glance, makes it look like you traverse all the way out left and down to a bolt before climbing up. I went to that bolt, but knew that did not make sense climbing up at that spot once I had visual. If you study the topo more closely, you will see that you only go half way between the belay and the bolt, where you have to mantle two large chicken heads. I could never get much of a visual (making it committing your first time up) on the three older bolts and hangers covering 100’ above. But basically you trend back right to above the crack that you had been climbing until it petered out. This is true run out and sustained face climbing for the grade on the oldest hardware (2017) we encountered in all of Cochise. The final pitch is more of the same, sustained face climbing at the grade (5.8) up 90’ through just two bolts with the crux move right off the deck (summit shoulder) which equals consequences before the first clip.  However, you have the option on finishing on End Game’s final pitch if you rather, which is better protected.

From the east, hike up the approach trail to the main wash directly north of the Rockfellow group. Look for a fainter cairned trail that goes off left following a smaller wash up on its west bank which leads to all routes associated with Rockfellow. The cairns stop right at the base of the west face of End Pinnacle. Circumvent (we stepped over a Faded Midget rattler here in mid-October) down and right along the face to a large house sized boulder leaning against the main wall. Endgame starts directly under this boulder on the left side. This route is fully bolted, hard to miss. Days of Future Passed starts just on the other side of same boulder. Magnus’s start follows several bolts up the slab and shallow left facing corner which dumps you into a wide slot which leads to the start of the chimney and wide crack above for Future.

Days of Future Passed, 500’+/-, 5.10R
1st Pitch- 160’- 5.10R/ This is the crux pitch of the route and the first half of this pitch is the crux of the pitch. I took the direct variation (5.10: the start of Magnus Veritas) which landed me in the right flared shallow chimney. I mantled out of it into the main chimney. I tried facing both ways at the start of the chimney, down climbed and restarted, so can definitely suggest facing right for the run out portion which is full on run out for the grade. Eventually you get to the large jugs on the right side and can sling one of those. Prior to that it was X run out. If you are not use to run out 5.8-5.9 chimney climbing, a C4#6 would protect this chimney. Continue up positive features on the sides of the wide crack to a full hanging fixed belay.

2nd Pitch- 150’- 5.8/ Continue up the wide crack with positive features aplenty to a semi-hanging fixed belay at the end of the wide crack.

3rd Pitch- 100’- 5.8PG/ This lead is not for the faint of heart. As the topo in the guide suggests, you are going to traverse straight out left to directly below two large chicken heads. Tie off both and equalize them. Then mantel up the face above and start the massive run out through three older (2017) bolts and hangers to the ledge above. You cannot see these bolts until you commit to this mantel and even then they are hard to spot. I kept spying the shiny bolts up and left but that is another route. The three bolts you are looking for are pretty much above the belay, so you end up trending back right after you pull those chicken heads. Crimpy climbing on chossy edges make for interesting run out face climbing to a large ledge with a fixed belay.

4th Pitch- 90’- 5.8R/ You have two options, Future’s last pitch is straight up from the rap belay through two bolts via run out face climbing off the deck with several moves at the grade before you reach the first bolt. Optionally you can finish on End Game’s final pitch traversing out right and up a chimney for a short distance and follow its bolts to the summit at the same grade, which is better protected.

Single rope rap back to the ledge. Double rope (60m) rap straight down to fixed rap hangers on Magnus Veritas. Another double rope rap down to below a roof on Magnus to another set of rap hangers. If you have double 70m ropes, you will not need to stop at this rap. Otherwise, one final rap to the ground.

Double ropes or 60m tag line. A C4#6 will help protect the run out chimney on pitch one. Otherwise single to C4#4. Double #3’s. I got by with double #3’s and a single #4, but the guide calls for double #4’s. As with many routes at Cochise, shoulder length runners for tying off chicken heads are better to haul than sport draws. I used a belay seat on that first hanging belay and was glad to have it, if your 2nd is speedy, maybe not a concern. Shade until 10am in October.