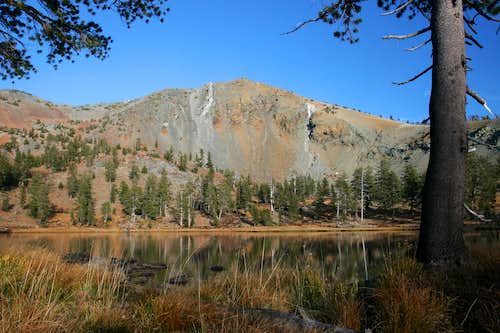 Though often left languishing in the shadow of formidable Mount Shasta, Mount Eddy is one of the great mountains of Northern California. The trip to the summit is one of the finest hikes in the Northstate. In one hike, one has the opportunity climb a triple divide peak, the highest point in Trinity County, the highest peak west of Interstate 5, the tallest mountain in the Klamath Mountains and an ultra-prominence peak.

Aside from any statistical factors, the hike itself is remarkable. The route travels through lush, flower field meadows, past lofty peaks and sparkling mountain lakes and to take in what is probably the finest vista in the region.

Although the trail boasts more than its share of superlative qualities, they do not come at a heavy price. Depending on which trailhead one begins at, only 3.3 or 4.75 miles away and only 2,500 feet of elevation gain, if reckoning from the lower trailhead. Since there are two trailheads for this route, a description of the route from each starting point is offered, followed by the rest of the trail once the two routes have converged. Whichever way one takes, the trail is an exciting and spectacular climb to the top of a magnificent mountain.

As previously noted, there are two trailheads for the Deadfall Lakes Trail. The more popular trailhead is located at the Pacific Crest Trail crossing at Parks Creek Summit. The other trailhead is found at Deadfall Meadow. The first route follows the PCT for 2.3 miles to the junction with the Sisson-Callahan Trail, where it also intersects the route from Deadfall Meadow. The latter route is only 1.4 miles to the junction but it climbs 750 feet.

The PCT from Parks Creek rises only 400 feet. While both are good options, the Deadfall Meadows route is preferable. Despite the greater elevation gain, it is shorter by nearly a mile. In addition, it follows Deadfall Creek through a large gorgeous meadow all the way to the junction with the PCT. The Parks Creek route spends significant time in the viewless woods and while it does pass through some attractive spring-fed meadows, none are nearly as extensive as Deadfall Meadow. This description will cover both routes to the junction with the Sisson-Callahan Trail separately and then continue to describe the rest of the route to the summit of Mount Eddy. 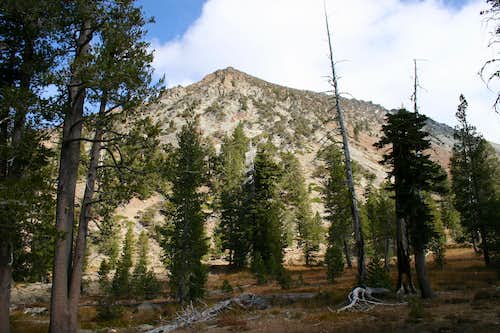 Beginning at the Pacific Crest Trail trailhead along Parks Creek Road, the PCT travels southeast, in a long traverse of Mount Eddy’s northwest shoulder. The trail passes through shaded stretches occasionally punctuated by grassy area with numerous wildflowers. When the forest cover clears, views to the west are good. Approximately 1.6 miles from the trailhead the PCT crosses a spring fed creek. Once across, the trail turns sharply south. Although Mount Eddy is not yet visible, the walls of Deadfall Basin can be made out at times. Soon Deadfall Meadow, rapidly climbing up the Deadfall Creek drainage begins to approach the same elevation as the PCT. About 2.5 miles from the trailhead, the PCT finally intersects the Sisson-Callahan Trail and the trail climbing up from Deadfall Meadow. 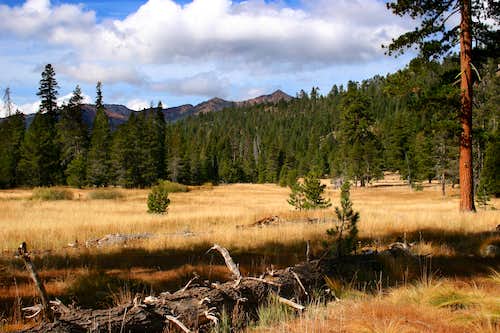 The Scott Mountains above Deadfall Meadow

From the parking area at the Deadfall Meadows trailhead, cross the street and take a few steps down into the meadow. Depending on the time of year and the amount of precipitation during the winter the first part of the trail can be very muddy. After 0.1 miles the trail crosses Deadfall Creek and angles to the southeast.

The route temporarily leaves the meadow and passes through some open forest, though the meadow and the creek are still visible and audible. About 0.25 miles beyond the first crossing, the trail crosses another creek, this one coming from Lower Deadfall Lake. This creek’s flow is much less than the main branch of Deadfall Creek and is at times dry. A third crossing, this time over Deadfall Creek again, comes in another 0.25 miles.

At this point the trail begins to climb in earnest, skirting the outer edge of the meadow. Small, spring fed streams cross the trail intermittently, causing the trail to get muddy at times. The creek, at times visible, can always be heard. Eventually the trail levels out as it enters a sparse forest and intersects the PCT, 1.5 miles from the trailhead.

At the junction with the Pacific Crest Trail, it is possible to head west on the PCT, then cross country for about 0.1 miles to get to Lower Deadfall Lake. To continue towards the other Deadfall Lakes and Mount Eddy, head east from the junction with the PCT, now on the Sisson-Callahan Trail, an old route from the 19th century that connected the Mount Shasta area with the town of Callahan, which was on the old stage line between Weaverville and the Scott Valley. Today it is a National Recreation Trail stretching nearly 20 miles from the Deadfall Basin to the north shore of Lake Siskiyou, just outside of the town of Mount Shasta. 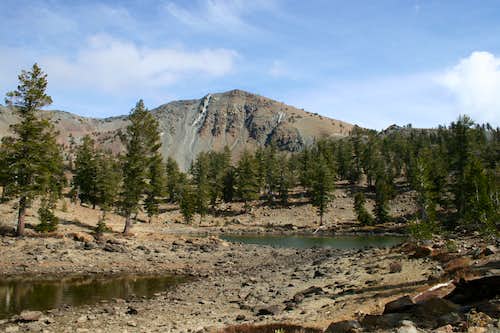 Almost immediately as the trail enters into Deadfall Basin, a short use trail branches off to the right, leading to Middle Deadfall Lake, at 25 acres, the largest in the basin. The forest in the area is sparse, evidence of the poor, highly mineralized soil. Mount Eddy is composed of serpentine and peridotite, neither of which is particularly hospitable to most plants. Views of the high cliffs over 1,000 feet above the basin improve.

Nearly 0.6 miles past the junction with the PCT, the trail begins a short, sudden, steep climb. This is one of the steepest parts of the trail, though it does not last for long. Once it has been surmounted, a small lake, one of many minor unnamed tarns in the basin, as well as the true summit of Mount Eddy come into view.

From most perspectives, Mount Eddy appears to be a high, red lump, hardly as impressive as some of its statistics might indicate. However, when viewed from the west, with its red and white streaked 1,200 foot face plainly visible, Mount Eddy seems a much more formidable mountain. Beyond the small lake, the trail winds its way along the south shore of Upper Deadfall Lake, perhaps the prettiest of the lakes in the basin. The lake is fed by a cold stream that meanders slowly through a luxuriant meadow perched at the base of Mount Eddy’s sheer west face.

Rather than passing through the meadow, the Sisson-Callahan Trail makes a sharp turn to the south and climbs steeply out of Deadfall Basin on to the south shoulder of Mount Eddy. Once on top of the ridge, the Sisson-Callahan Trail descends into the canyon of the North Fork of the Sacramento River, ultimately ending at Lake Siskiyou. The route to the summit of Mount Eddy departs to the east, beginning the final ascent of the mountain. 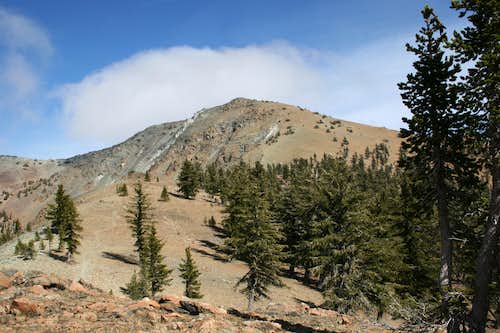 Mount Eddy from junction of the Sisson-Callahan and summit trails

After departing the Sisson-Callahan Trail, the route to the summit of Mount Eddy continues along the ridge for nearly 0.5 miles before it begins to switchback up the mountain. Once the switchbacks commence, it is another 0.6 miles to the summit. Views get continually better as one climbs, particularly to the south and to the west.

The final push to the summit is filled with drama. As one nears the top, the views continue to get better and better as Mount Eddy itself fills less and less of the vista. Finally, just as one arrives at the summit, Mount Shasta, heretofore obscured, bursts into view, and dominates one's attention. Though magnificent, don’t let Mount Shasta cause the neglect of the rest of the panorama.

To the north, the Whaleback, Goosenest and Willow Creek Mountain all lead ones attention to distant Mount McLoughlin in Oregon. To the northwest, the Scott Valley, Marble Mountains, Russian Mountains and Scott Mountains are all discernable. To the west is an arresting view of the Trinity Alps, with nearly every major summit of the eastern, higher part of the range visible.

To the south the rest of the Trinity Divide is readily apparent. All of the major peaks, including the Grey Rocks, the Castle Crags, “Castle Peak”, “Grey Rock Dome” and “Harry Watkins” can be seen. Far to the south, Lassen Peak and the rest of the Mount Tehama rabble line the horizon. 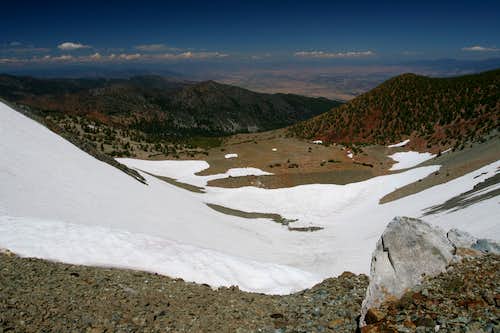 Looking north from the saddle between Mount Eddy and Peak 8,881

On the summit, the ruins of an old lookout are in the latter stages of decay. From this point, a use trail leads to the east, crossing a saddle to Peak 8,881. While crossing the saddle, the impressive bowl beneath the summit of Mount Eddy drops off to the north. The bowl often holds snow well into the later parts of the summer. From Peak 8,881 a much more rewarding view of Mount Shasta, Black Butte and the Strawberry Valley can be had.

While the views are astounding and are more than enough to make a trip to the summit of Mount Eddy a worthy endeavor, the meadows, lakes and associated scenery en route make the Deadfall Lakes Trails a particularly rewarding outing. 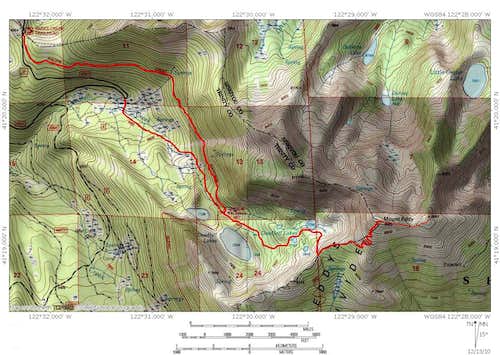 From Mount Shasta City, drive north on Interstate 5, through the town of Weed. Exit at the Edgewood/Stewart Springs exit. Turn left and drive under the freeway, then turn right onto Old Stage/ Old 99. Continue north for a couple hundred yards and then turn left onto Stewart Springs Road. After 4 miles, Forest Service Road 17 splits off to the right. Follow this road to the Parks Creek trailhead. To reach the Deadfall Meadow trailhead, continue on Road 17 for another 1.25 miles, descending swiftly. At the sharp, hairpin turn there will be a small parking lot on the right. The trail is across the road.