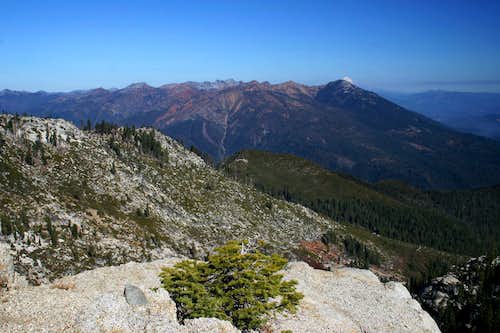 The southwest corner of the Trinity Alps is anchored by cluster of high peaks, many of which exceed 8,000 feet. Hugging the slopes of the mountains are numerous lakes in gorgeous glacial cirques. Interspersed between the peaks are beautiful meadows and sparkling crystalline streams. A network of trails connects the meadows and lakes and provides access to cross country routes to the peak’s summits. Four trails provide entry into this area. In the north, the Deer Creek Canyon trail connects to the Stuart Fork trail. The Long Canyon (the most popular access route) enters from the east. The is the easiest way to get to the Four Lakes Loop. Two trails approach from the south. The Granite Peak trail climbs to the top of its namesake peak. A trail splitting off the main route just below the summit retreats back down the mountain and links with the Stoney Ridge trail in Red Mountain Meadows. The Stoney Ridge trail is the primary southern approach to the Four Lakes Loop.

While the Long Canyon trail provides a more direct approach to the Four Lakes Loop, the Stoney Ridge trail reaches the same destination while providing access to two beautiful meadows and the secluded and spectacular Echo Lake. The view from Stonewall Pass, the trail’s highpoint is one of the most memorable in the Trinity Alps. Lastly, the Stoney Ridge trail provides the opportunity to climb Red Mountain, Middle Peak and Granite Peak. 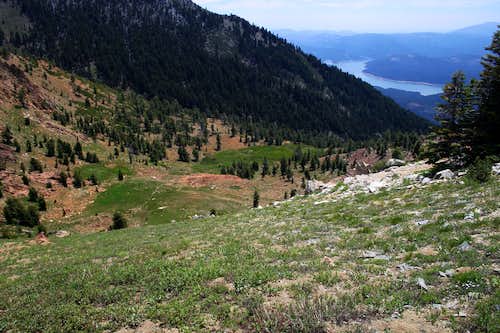 Although the Stoney Ridge trail climbs relentlessly up the east side of Red Mountain, it has a reasonable grade and it not particularly difficult. From the trailhead it travels in a northwesterly direction. It is relatively level initially, climbing 500 feet in a mile. The forest is initially sparse due to past logging activity. This means views are good, although there is not much to see. Little indicates the rugged, rocky, wilderness revealed upon arrival at Stonewall Pass. After the first mile, the trail passes the Trinity Alps Wilderness boundary. The effects of logging immediately disappear. The trail begins to switchback immediately after entering the wilderness area. A total of 57 switchbacks await over the next 3.5 miles. The trail remains in the forest for three miles. There are occasional views of Trinity Lake and Monument Peak to the south.

The trail parallels Stoney Creek for three miles. It is only readily accessible along switchbacks 11 and 9, where one can follow short use trails down to the creek, as it passes through a granite gorge with a few beautiful, small, waterfalls. After 3 miles the Stoney Ridge suddenly leaves the forest and enters Red Mountain Meadows. The small, lush meadow makes an excellent base camp for assents up Granite Peak, Middle Peak and Red Mountain. A small spring located at the southern end of the meadow provides water. Views of Trinity Lake are excellent. The routes to the three peaks all begin in Red Mountain Meadow. 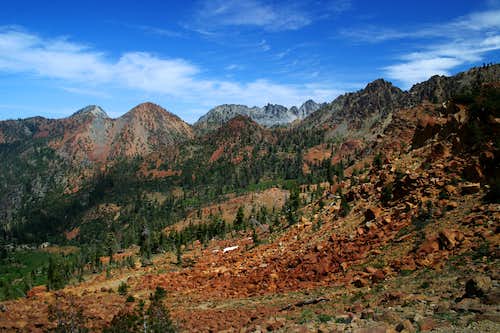 The view north from Stonewall Pass

The Stoney Ridge trail continues to switch back above the meadow for another half mile. Views of Granite Peak become increasingly better. Finally, one reaches the top of the trail at 7,400 foot Stonewall Pass, 4.5 miles from the trailhead. The view from the top is spectacular. To the east, Middle and Granite Peaks are stunningly close. To the north, Siligo and Gibson Peaks as well as numerous unnamed peaks are visible beyond Van Matre Meadows. To the west, the Granite core of the Trinity Alps is visible. Sawtooth Peak is particularly prominent. Views to the south include Shasta Bally and Trinity Lake. Climbing the slope on the west side of the pass reveals excellent views of the Red Mountain summit and the massive, granite, north wall of Monument Peak, as well as a unique perspective of Middle Peak. The pass surmounts a saddle between Red Mountain and Middle Peak. The saddle is composed of peridotite, a red stone similar to serpentine. It is uncommon throughout most of North America but amazingly abundant in the Klamath Mountains. 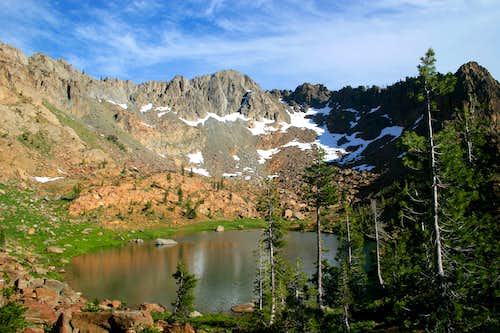 From Stonewall Pass the Stoney Ridge trail descend steeply down to Van Matre Meadows. The trail does not cross the meadow itself. Instead it skirts the edge of the meadow, along the flanks of the cliffs leading up to the Echo Lake basin. The trail crosses Echo Lake’s outlet stream just below a series of beautiful cataracts. The twin, unnamed “Echo Peaks” loom beyond the cliffs the trail traverses. Sawtooth Peak is often visible to the west. A mile from Stonewall Pass the trail begins to climb sharply, switchbacking above the north end of Van Matre Meadows. Views south reveal the impressive bulk of Red Mountain. After about a 1.5 miles a small trail splits off of the Stoney Ridge trail and heads towards Echo Lake, passing a small tarn en route. Echo Lake makes an excellent campsite while heading toward the Four Lakes Loop. From the route to Echo Lake the Stoney Ridge trail begins to climb again, swithcbacking up to 7,000 foot Little Stonewall Pass.

The trial continues north, descending from Little Stonewall Pass into lush Siligo Meadows. An unnamed peak towers to the east. Siligo Meadows is a three tiered meadow complex. The trail passes through the middle meadow before climbing into the upper meadow. Small tarns can be seen in the lower meadow. Finally, after passing through Siligo Meadows, the Stoney Ridge trail makes its final ascent up to 7,500 foot Deer Creek Pass, 8.5 miles from the trailhead. Siligo Peak, Dolomite Ridge and Gibson Peak loom to the north.

Middle Peak presents little of interest while climbing the Stoney Ridge trail. Nonetheless, it is a spectacular summit, especially when viewed from the Echo Lake basin. To reach the peak, one must travel crosscountry in a northeasterly direction through Red Mountain Meadows. A high saddle connecting Granite and Middle Peaks is visible above the meadow. One must climb steeply up the slope to the saddle. Once the saddle is achieved, it is a simple matter of following the ridge to the summit of Middle Peak.