Delta County is the 17th most populous of Colorado's 64 counties, with a still relatively small population with just under 27,000 people. With 1,149 square miles, it sits on the smaller side of the county list. 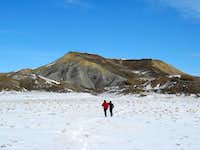 Desert hiking
Mostly agricultural, the county is also a large producer of coal.

Mesa edge and fall colors.
The county also has several good and USA renowned wineries. Apples, peaches, cherries, and several other fruits and veggies are produced locally, both traditional and organically grown.

Two State Parks sit within the county boundaries (Crawford Lake S.P., and Sweitzer Lake State Park), as well as one very close to the county, along with a reservoir for boating (Paonia S.P.) Also nearby, the Black Canyon of the Gunnison National Park

The Black.
borders the south side of the county, although it sits just to the south, it is easily accessible (the north side) for hiking, climbing, fishing on the North Fork of the Gunnison, and camping. For the more driving inclined, there is also the Grand Mesa Scenic Byway.

The area sits on the west side of the West Elk Wilderness, and is part of 2 separate mountain ranges - the West Elks, and the peaks of the Grand Mesa. Additionally, the western edge of the county is primarily a desert region, with a bunch of smaller desert peak hikes, and the Dominguez and Escalante canyons, a recently designated Wilderness area. Also, just a scant 20 miles SE of the Dominguez Canyon Wilderness Area, the Gunnison Gorge Wilderness Area also beckons, with access down to the Gunnison River, and Gold Metal fishing waters. The elevations of the peaks rank from the low 5000' to more than 11,000', giving it more than a vertical mile in relief. The area comprised of the West Elks that lays within Delta County has some serious topographical relief, rising abruptly from the North Fork Valley. These are the peaks more people are familiar with. The peaks on the Grand Mesa are also somewhat frequented, but much isolation is still to be found anywhere away from the several hundred lakes on the mesa.

The newest show in town, Revolution Brewery in Paonia.

While you're there, I highly recommend finding time to visit the Hotchkiss-Crawford Historical Museum in downtown Hotchkiss. Hours and directions can be found at their website.

On the "I didn't know that" front, Delta County only touches 3 other counties, the fewest in the state (Gunnison, Mesa, and Montrose).

Not that I think it will hold a lot of appeal for most of the folks who are on this forum, but if you're in the area and you enjoy motorsports, there is Thunder Mountain Raceway, just past the county line in Olathe.

1) Head south from Glenwood Springs on CO-82 to Carbondale (about 14 miles). Head west on Hwy 133 until you get to Delta County. Boom. About 55 miles to the county line. (east access).

2) Drive west to Grand Junction (about an hour), then follow signs south to Montrose on US 550. Drive south to the county line, about 45 minutes. (North and west access).


Weather, seasons, and other considerations.

There is plenty of private land - both owned by private individuals and by (coal) companies. Best to review the Gunnison N.F. maps and the Grand Mesa N.F. Map. Both maps give a good reference to the public/private areas of Delta County, but may not accurately reflect leased holdings. 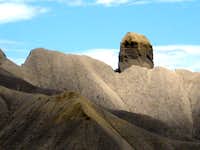 Likely only climbable by destroying it and driving in snow stakes. 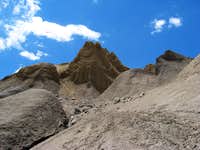 Mancos shale desert
The mud during the wet season in the desert and upper peaks is unbelievably sticky and can be un-navigable, by foot and vehicle. Winter can bring cold temperatures, summer can be hot, the snow up on the higher peaks (pretty much anything above 6k') can be measured in feet. Lots of feet. The mosquito season on the Grand Mesa is usually late May through mid-August. Long sleeves and pants recommended, as well as your choice of mosquito repellant. 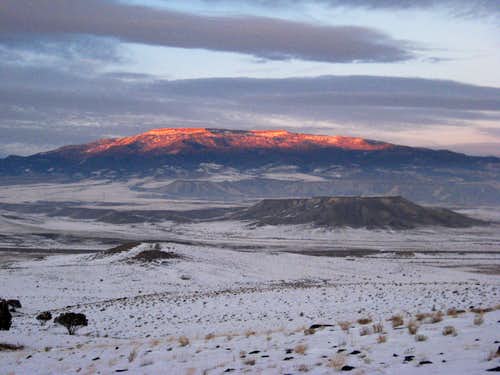 First, I'm going to plug my parent's Bed and Breakfast in Hotchkiss. The Hanson Mesa B&B sleeps 7 max, and yes, breakfast is included.

A fine laundromat is located in Hotchkiss - North Fork Ultramat is 1 block south of City Market (you can't miss City Market in Hotchkiss, believe me). More importantly, they offer hot showers, wash, dry, and fold service, as well as coffee while you wait, and internet access. 970-872-2000. Open 7 days a week from 8AM-7PM.


Another good place for coffee and internet is the Coal Train Coffee House, right on Main St (Bridge St.), "downtown" Hotchkiss. Check out The Creamery Arts Center while you're across the street, featuring local artist art, sculpture, and ceramics.

Bed & Breakfasts, Homestays, and other info can be found here.

The downlow on the peaks and the geography 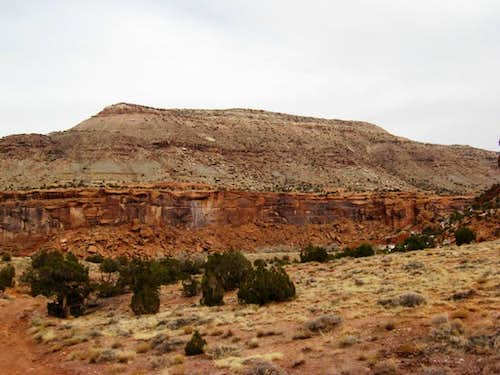 The cliffed out peak, UN 5916.
The peaks listed below are the USGS peaks and ranked or soft ranked peaks. USGS named peaks with 0' of interpreted prominence are not listed. Delta county holds 6 peaks with more than 1,000' of prominence. 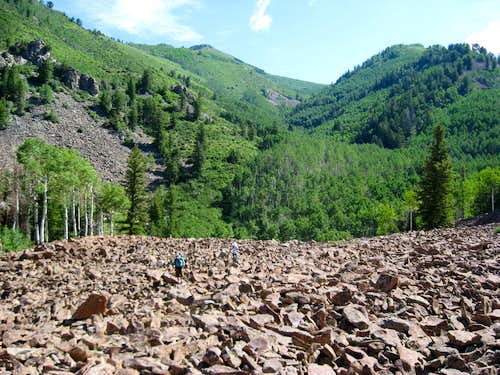 "Dinnerplate" talus is commonplace above 9,000'. 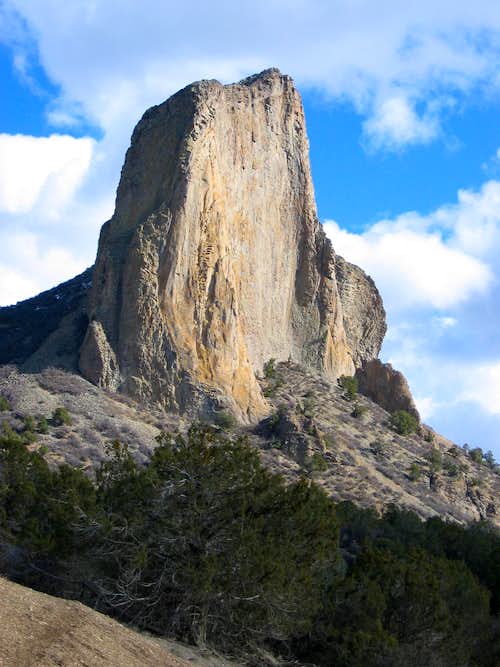 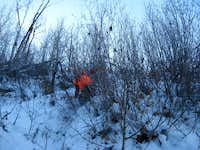 Get ready for oak-bashing!
Temps range wildly during the seasons, but summers are hot everywhere, even above 10,000'. The Gambel Oak makes several of the peaks significantly more brutal than they would be otherwise. It gets worse the farther east you go.

Peaks and ascents range from trails and walk-ups, to off-trail difficult bushwacking to scrambling and technical ascents.

Here is a direct link to the routes.

The peaks on ListsofJohn.com and Known access (Public or Private)

This list by no means is "official" or endorsed by anyone or organization. This simply reflects my best knowledge. If anything appears incorrect, please let me know.