Though relatively small in elevation, Mount Lamborn is a huge mountain rising more than 5500 vertical ft. in five miles over Paonia and the surrounding mesas. Indeed it is very much the monarch of the area in terms of prominence and sheer visibility. Mount Lamborn is also the Delta county highpoint, though this doesn't do much to increase the amount of visitors it sees. 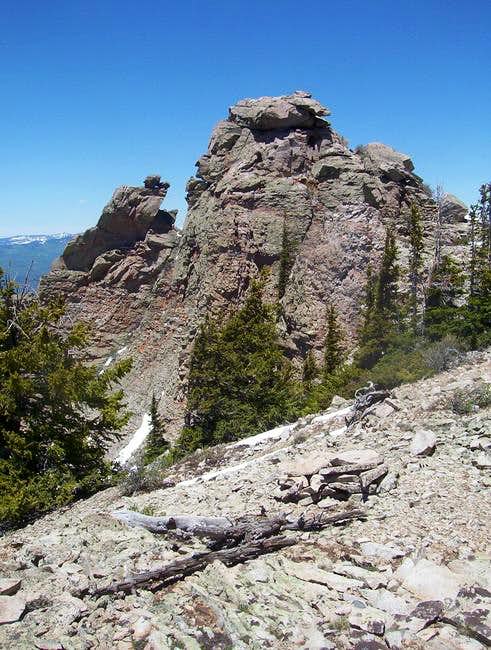 Mt. Lamborn offers great opportunities for solitude. Indeed, when looking at the summit log it becomes clear that only thirty parties climb this mountain every season and that more than eighty percent live within a one hour radius of the peak. On the two different occasions that I climbed this peak, I met only two other people. This is due probably to the difficulty of access to the base of the peak, and the long and strenuous climb to the summit. Indeed Mt. Lamborn and adjacent Bell Canyon are very much a local secret and it is in many ways best that they so remain.

Because of the elevation change between the mountain's base and summit, the long hike to the top takes climbers through a startling diversity of landscapes and vegetation. The hike starts by going along the depths of rugged Bell Canyon through a dense forest of junipers, pines, scrub oak and sagebrush. The vegetation in Bell Canyon is quite unique to Colorado and is usually found three hundred miles to the north. This is because of the canyon's location on the extreme western slope and its northwesterly orientation.

The trail then continues climbing and enters a beautiful aspen forest with interspersed pines. Here the ground vegetaion also much gentler and more fragile. The trail then climbs through scrubby vegetation before flattening out on a high meadow and aspen forest. The trail finally climbs a grassy slope before topping out on the rugged and alpine summit ridge and block.

Those who do venture to the top are rewarded by spectacular 360 degree views spanning for more than a hundred miles. To the west you can see the flat expanse of the Uncompaghre Plateau stretching out to the La Sal mountains one the horizon. To the south you can from Uncompahgre Peak and the rest of the San Juans stretching out to Lone Cone. To the north you can see Grand Mesa, The Raggeds Wilderness and the high peaks of the Elk Range and the Maroon-Snowmass wilderness, and to the east you can look out on the vast untracked expanse of the West Elk Wilderness, one of Colorado's least visited. Equally impressive are the views looking straight down 5500 feet to Paonia and the surrounding valleys. From this lofty viewpoint it's interesting to contemplate the fact that many drainages, valleys, and basins in the higher ranges are indeed higher than the summit of this mountain. Such thoughts help put Colorado's mountains into perspective.

Mount Lamborn is almost always climbed by the Bell Canyon, a spectacular canyon on the southern side of the mountain. A very rough four wheel drive road leads to the base of the canyon. This road is deeply rutted and includes very steep grades and multiple stream crossings. This road is three miles long though it seems like much more. In many cases it might be faster to park the car and continue up the road on foot, though this could significantly add to the mileage and elevation gain of the hike.

From 3rd St. (Main St.) in Paonia turn southwest onto Onarga ave. This street climbs out of town onto Lamborn Mesa and becomes road 4100. After about 1 mile road 4100 intersects road N25. Turn left on this road and then take the next left onto road 4050. Follow road 4050 until it ends. Here turn left onto a dirt road. After just 2.5 miles turn rigth onto another dirt road and keep going right, right up to the end. The trailhead can be difficult to find and it's best to have a detailed map or go with someone who knows the area.

The only established route climbs steeply up through Bell Canyon. This is the only manageable route for hikers since the mountain is far to steep on all the other sides. It is possible that there might be some nice very long snow climbs on the western and northern sides of the mountain. These however, would require advanced navigation and climbing due skills to the extreme nature of the bushwacking that would be involved, the long approaches and steep slopes, andthe very rotten rock. However, for anyone who is willing to try, it would a great trip and report, and a very welcome addition to this site.

Though the summit and slopes of Mt. Lamborn are on National Forest Land, the approach passes through a wildlife preserve and grazing land for local ranchers. When approaching the mountain, please stay well away from any grazing livestock, and respect their owners' rights.

The mountain is almost exclusively climbed in late spring, summer and early fall. The difficulty would significantly increase in winter due to large amounts of snow, and the fact the the trail passes on and under significant slide paths. The final summit ridge is very exposed, and could be rendered much more difficult or dangerous in poor conditions.

Camping is allowed anywhere once on the trail and in the national forest. Please don't camp in the wildlife preserve.

Check weather for Paonia. Be aware that conditions on Lamborn can be vastly different from those in Paonia due to the elevation change.