The Devil's Pulpit is a prominent outcropping of reddish radiolarian chert on the east side of Mt. Diablo. It is easy to get to from the Fire Interpretive Trail or you can get there from the turnout called the Devil's Elbow from the Main Road or from the summit or North Peak Trails. It requires just a bit of scrambling to get to the top of it, so it is a short but rewarding outing suitable for kids learning how to rock climb. The views from the top are incredible! 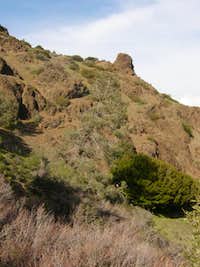 The hard red Franciscan chert that makes up the Devils pulpit is a metamorphic rock that is sedimentary in origin and rich in microscopic radiolaria fossils. It forms impressive layers and beds. When surrounding rocks are eroded away a monolith of hard erosion-resistant chert like Devils Pulpit may appear.

I think it's also interesting is that in Russian chert means devil.

As a bonus, if you go in the springtime you'll see lots of flowers blooming in the area including wild mustard, Indian Warrior, Brewer's Rock Cress, and many others. 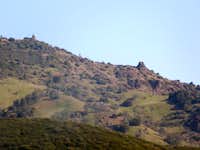 About midway on the 0.7 mile Fire Interpretive or Mary Bowerman Trail which encircles the summit Mt. Diablo you will see the Devil's Pulpit just east of the trail. It is an easy scramble to the top from here.

Two other approaches: From the summit of Mt. Diablo there is a use trail going about 1/2 mile east and down to the Devil's Pulpit.

From the turnout on the main road below the summit referred to as the Devil's Elbow, also where the North Peak Trail starts, you can follow a use trail about 1/2 mile northwest and up to the Pulpit. 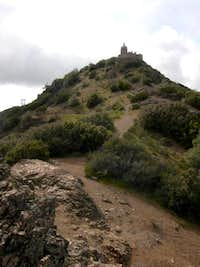 You will pay a Day Use fee of $10 to enter Mt. Diablo State Park. No hiking permits are needed. Please practice Leave No Trace ethics. Alcoholic beverages are prohibited in the park. Dogs are allowed in campgrounds and parking areas but not on trails. Off-road vehicles are prohibited. Bicycles are allowed on paved and dirt roads and designated trails. Firearms and fireworks are prohibited. Campfires are allowed in provided barbeques and fire pits during certain times of the year. Inquire at the visitor center or ranger station for more information. 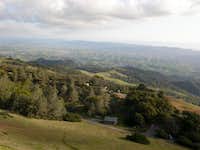 Juniper Campground is nice campground with 36 sites just a short distance away down the main road. The fee is $30 per night. There are picnic tables, fire rings, water spigots, bathrooms with showers, and incredible views from select campground sites. The sites are designed for tents or small RV's up to 20 feet. There are no hookups or dump stations in the park. You can make camping reservations at www.reserveamerica.com

Further down the road are Junction and Live Oak Campgrounds which tend to be a little less busy than Juniper. There are also group campgrounds available. For more detailed information on the campgrounds, please see this page. 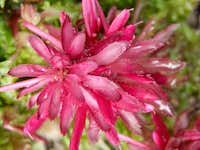 "The Miwok people believed that Mt. Diablo was the center of creation.

The creation story starts with Mol'-luk, a California condor who lived on Do'-yum'-bel'-le, or as we call it today, Mt. Diablo. Mol'-luk would perch himself upon a prominent rock on the east side of the mountain to watch over the world. Some say that prominent rock is now known as "Devil's Pulpit."

Then one day Mol'-luk noticed that something was wrong with his rock, so he consulted his brothers. Mol'-luk was told by his brothers that the rock was his wife. He was also told that his wife was about to give birth and that a big fire must be made. When the fire was hot, the brothers rolled the rock into it and when the rock was hot it broke open.

Thus Wek'-wek was born. Wek'-wek was Falcon-man. After a time Wek'-wek wanted to create people but didn't know how. He asked his father Mol'-luk about it, and was told he must speak to his grandfather, O-let'-te, Coyote-man, who lived at the ocean. O-let'-te told Wek'-wek he knew how to make Mew'-ko (Miwok Indian people), but first Wek'-wek had to capture three birds: Choo'-loo the Vulture, Ah-wet'-che the Crow, and Kol'-kol the Raven. Once captured, they took the feathers from each bird.

Next morning Wek'-wek and O-let'-te went around the countryside and stuck three feathers into the ground at each place they wanted Indian people and villages. They also gave each place a name, used by the Indians. The three feathers they stuck into the ground were for Cha'-kah the Chief, Mi'-yum the Woman Chief, and Soo-la-too the Poor People. Next morning all the feathers sprang to life and became the Mew'-ko, or Miwok people."