Windy Point is a San Francisco Bay Area peak that is located on the northern boundary of Mount Diablo State Park and approximately three miles southeast of the summit of Mount Diablo.  I'll let you ponder what seems to be an interesting paradox while I continue on to mention that Windy Point is the highest summit in a rather large area of surprisingly rugged ridges and canyons that lie between Mount Diablo and Marsh Benchmark. Given this fact, plus the peak's 500+ feet of clean prominence, one would think that there should be some nice views to be had from the summit. But, alas, the summit is semi-surrounded by rather thick stands of oak trees that block most views to the north and some views to the south. The views are there, but one has to do a little extra work to obtain them.
Even so, the peak is surrounded by a network of fun and scenic hiking trails and I highly recommend a visit to this remote summit. Windy Point is ranked by ListsOfJohn at number 3687 in California. 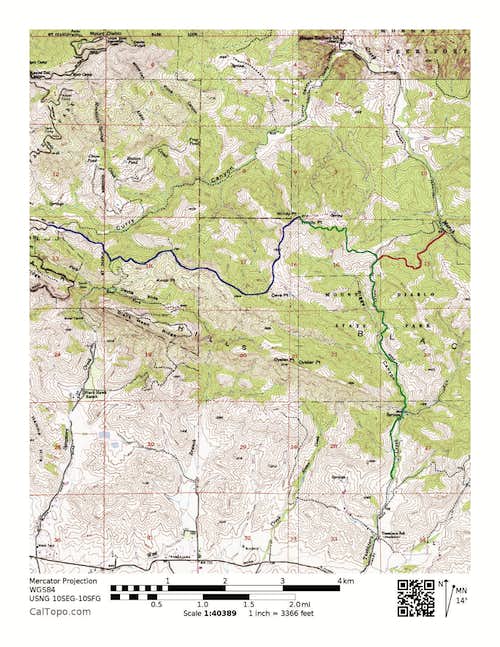 Green: Finley Road Route. Red: Morgan Territory Road Route. Blue: Curry Point Route.
Okay, back to that provocative first sentence... A quick glance at a map of Mount Diablo State Park, will show a sizable 'pan-handle' of the park extending to the southeast that connects with Morgan Territory Regional Preserve. Windy Point is on the north boundary of this 'pan-handle' section of Mount Diablo Park which is southeast of the summit- but you already figured that out, right?

Most hikers will likely want to approach this peak from the south or the east. Approaches from the north or west will involve traveling through regions that are not yet open to the public.
From the South:
Approaches from the south will start along Finley Road which extends north through the community of Tassajara. There are several ways to reach Tassajara.
From Interstate 580 just east of the junction with Interstate 680, take the Tassajara Road exit and travel north for about 7 miles to where the road makes a significant bend toward the west. Turn right (north) on Finley Road and drive through the town of Tassajara. Look for a wide shoulder east of the road approximately 1.3 miles from the turnoff at Tassajara Road. This is as close to the trailhead that one can legally park. There is no legal parking beyond this point all the way to the end of the road. About 0.75 miles of hiking along the road is required to reach the actual trailhead. Note that there is room for about half a dozen or so vehicles to park along this section of the road. There may be other parking turnouts back down the road towards Tassajara if this one is full.
From Interstate 680 in Danville, one can take the Sycamore Valley Road exit to travel east. Eventually the name of the road changes to Camino Tassajara Road. Simply stay on this road until it eventually enters the town of Tassajara where one can turn left on Finley Road. Follow the directions above to reach the trailhead. The total distance from I-680 to the Finley Road junction is approximately 7.5 miles. 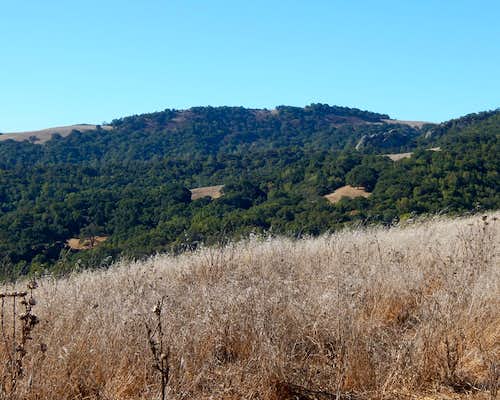 From the East:
The approach from Morgan Territory Road is surely the shortest for reaching Windy Point, but the parking may be very limited.
From I-580, take the Livermore Avenue exit north. After more than 3.5 miles the road ends at Manning Road. Turn left (west) and follow this for about 0.5 miles to the junction with Morgan Territory Road. Turn right (north) and follow this narrow windy road for approximately 10 miles to the small turnout near the trailhead. The total distance from freeway to trailhead is approximately 14 or 15 miles.
Other Approaches:
One can start from the main staging area in Morgan Territory Regional Preserve along Morgan Territory Road (about 5.5 miles from Manning Road- see directions from the east above). Hiking to Windy Point from here will involve a much longer hike with a significant amount of extra climbing over intervening ridges and through canyons. I didn't say that that would be a bad thing... :-)
Another interesting (though, less than legal) approach can be made from within Mount Diablo State Park- specifically the Curry Point trailhead. This trailhead is easily reached via the main south entrance to Mount Diablo State Park.

From Tassajara / Finley Road (8.6 miles RT):
Hike north from the  turnout along Finley for about 0.75 miles to the main gate at the trailhead. Then stay on the dirt road (Old Finley Road) as it, at first, winds through beautiful shaded groves of oaks near the creek bed. The first mile or so of this hike is in Morgan Territory Regional Preserve. Another gate is soon reached to enter Mount Diablo State Park. Beyond this, the hike is less shady, but still scenic and enjoyable. 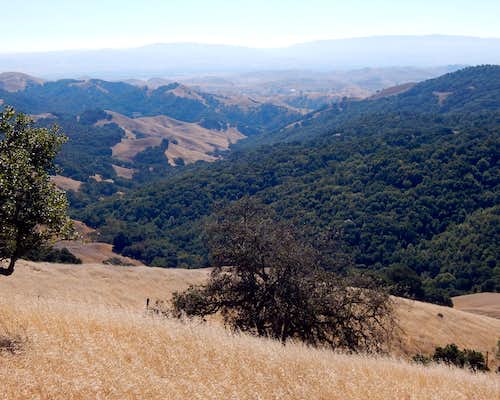 Looking down Tassajara Creek Canyon from near Windy Point.
Simply stay on Old Finley Road for another mile or so until a junction is reached for Highland Ridge Road. Turn left (west) and follow this as it ascends along the crest of a ridge with beautiful views all around. In less than a mile a gate is reached signed for “No Trespassing”. To keep your hike mostly legal, backtrack back down to a junction with the Tassajara Creek Trail and follow it west a short distance to the south slopes of Windy Point. There are several use (cattle) trails that can be follow up the steep slope to a barbed wire fence just below the top. One can climb over / under the fence or use a gate located a short distance east of the summit. Neither the gate nor the fence have “No Trespassing” signs posted (or my family would have surely mutinied on me). A good use trail just north of the fence can be followed to the top.

Note that one can simply climb over the formerly mentioned gate along Highland Ridge Road- ignoring the “No Trespassing” signs and follow a road to the second gate where the top is easily accessible via the above mentioned use trail. I only mention this for the sake of scientific interest, since I would never advocate illegally hiking on non-public property.
From Morgan Territory Road (Approximately 6.0 miles RT):

It would be nice if one could hike directly up Old Finley Road from this trailhead, but access is blocked by some private inholdings, so one must use Morgan Creek Road and cut over to the junction with Old Finley Road and Highland Ridge Road via the Jeremiah Creek Trail. From the junction, simply follow the directions outlined above.
From Curry Point (Approximately 9.0 miles RT):
This route involves a significant amount of hiking through non-public lands. Proceed at your own risk.
Follow the beautiful and scenic Knobcone Point Road trail as it winds along a high rocky ridge. Eventually, after about 2 miles, a gate is reached marking the boundary of the state park. There are no “No Trespassing” signs posted, but the area beyond is clearly not opened to the public. Follow the road for another two or three miles to the southwest slopes of Windy Point.

Windy Point can be hiked at any time of year. Most will prefer winter or spring due to cooler temperatures and the presence of beautiful northern California wild flowers.

An interesting trip report by trexkerry can be found here.
A nice report by Bob Burd.