The Dugway Range is a long way from anything. Because of some Geode Beds on BLM land near the base of the range, many city folk have actually been there and know where this little range is hiding. The Dugway Range is just outside the massive Dugway Military Base. Just to the north inside the base is the highly coveted 2000 prominence Granite Peak, the one nobody can get up thanks to the tight security. Even if you did slip by, with target grids surrounding the mountain, one wrong step on an unexploded bomb might end your climbing career quickly. The highest point isn't named on topo maps but a register placed by John Vitz in 1998 uses the standard default name of Dugway Range Highpoint. Only a few have visited the summit since then. One hunter signed the log saying, "looking for the perfect deer". A year later he signed again saying "still looking". 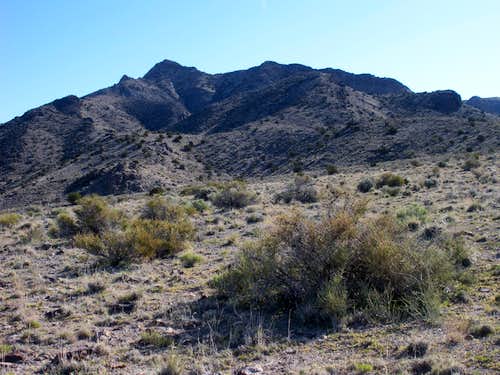 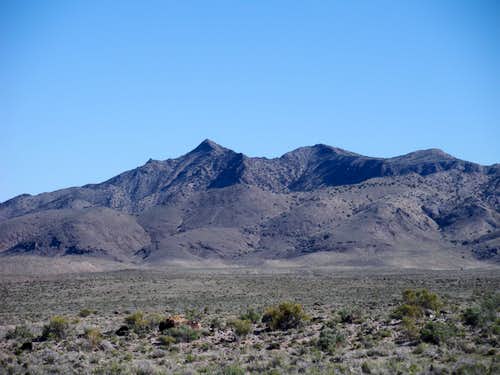 Follow the Pony Express Road west until you reach the Dugway Range and Dugway Pass. Drop down the west side a mile or so until it flattens out. At a curve in the road sign, the only real road to the right since the pass branches off to the right. If you hit the Dugway Geode Beds sign you went too far (although there is a route through there somewhere in a maze of roads). Follow the side road as it curves along the base of the Dugway Range. A high clearance vehicle is recommended here. At 2.7 miles, a nice side road comes in (the one from the Geode Beds). At 5.3 miles, I took a short road towards the peak until it dead ended in a wash. (see overview map) 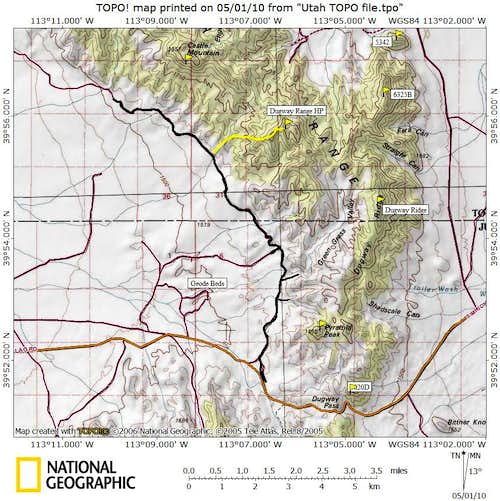 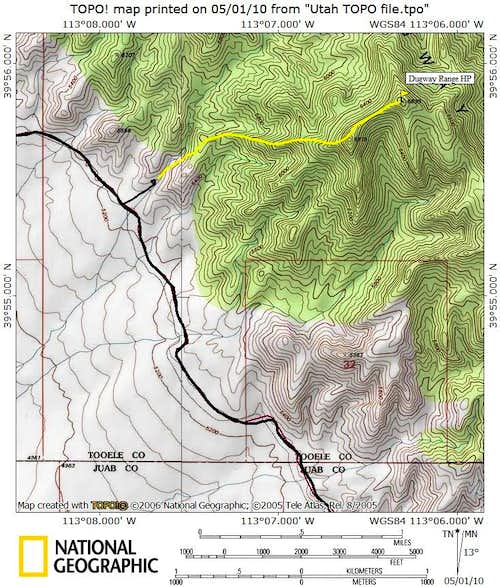 All kinds of camping spots where I parked. Other places all over the place on the access road along the west slopes of the Dugway Range.

One could climb anywhere from the road along the base of the range. Most ridges lead to the false summit. All the cliffs had easy bypass areas. The ridge between the false and true summit is rocky. Plan some side hilling or minor scrambling on the ridge top. 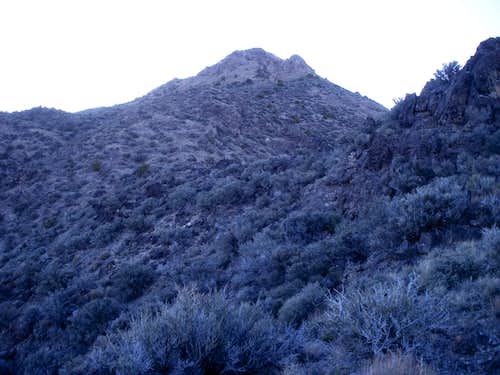 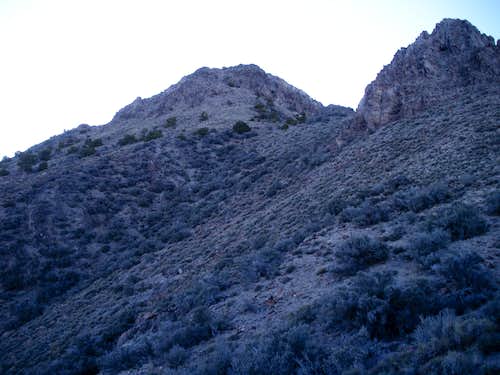 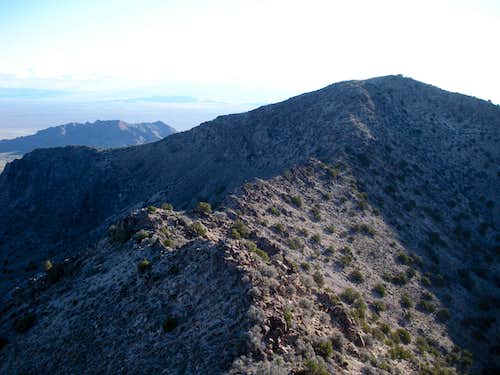 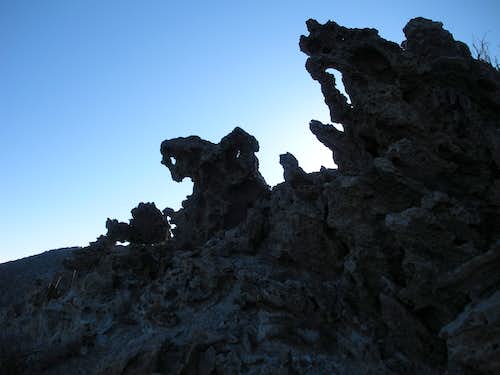 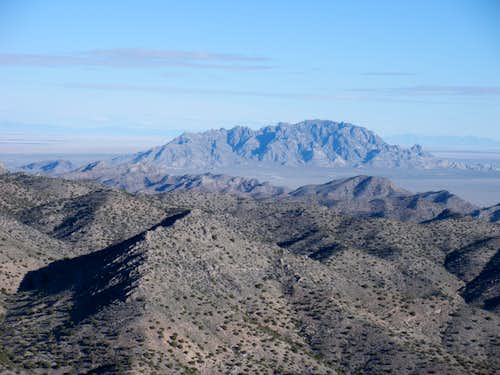 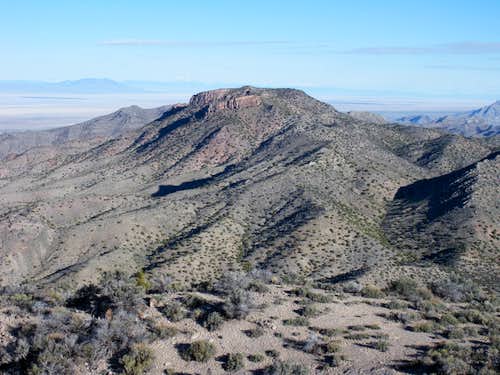 Castle Mountain to the north 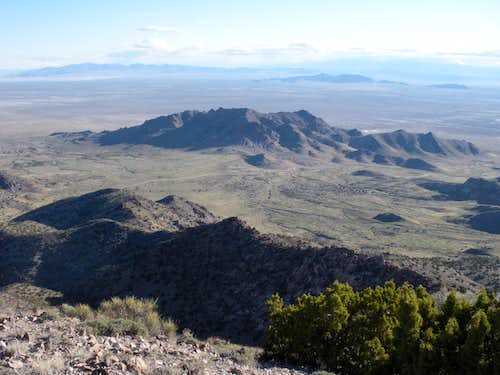 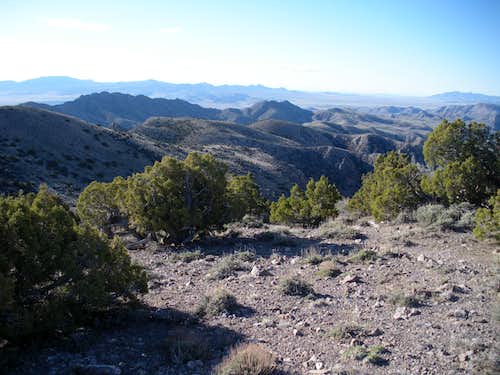 Any idea what this is? It was about 50 feet below the summit, probably tossed there. Top part was in good shape, looked like a military use lever. Smoke charge for helicopters to pick someone up? 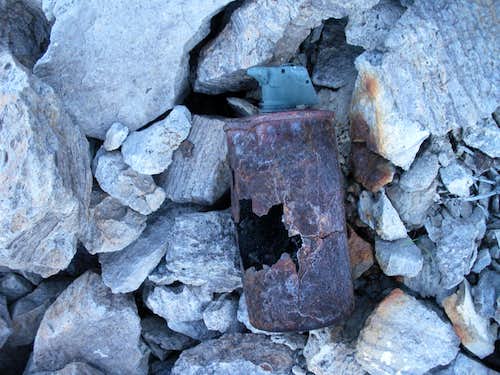