Dychtau (also known as Dikh Tau, Dycktau etc.) is Europe's second highest mountain. It's located in the western end of the Northern Massif in Bezengi. Famous for its technical difficulty and frequent avalanches, it's a huge challenge for any climber. There is no easy route to it's summit.

The easiest route is an airy and sometimes exposed 4B Russian grade which was climbed by famous alpinist Cockin in 1888.
Route description.

One look at the north face of the peak makes you tremble and it is not as often climbed as the other two highest peaks in Bezengi - Koshtan and Shchara. Those two peaks are also severly technical, but in general not as dangerous as Dychtau.

The peak is also known as one of "The Brothers of Bezengi". The other one is Koshtan. The two peaks marks the end of the massive wall of mountains - Dychtau in the west and Koshtan in the east. 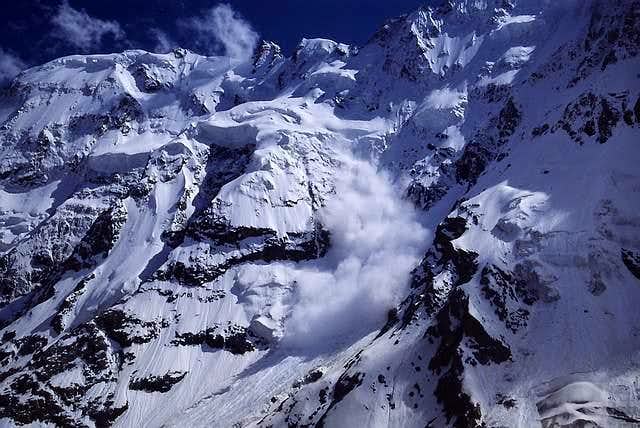 The beginning of a massive avalanche rushing down the 2000 meter high north face of Dychtau.

You have to arrange transport from Nalchik, a small city at the foot of the Caucasus. A minibus for 6 persons, cost €100. It'll take you all the way through the checkpoints along the way to Camp Bezengi. There are no regular transport and the military checkpoint on the way will bounce you if you haven't the proper documentation. If you're going with the minibus, all this is taken care of by Bezengi Camp's head office in Nalchik.

Follow the right hand side of Mizhirgi glacier until you hit the junction of glaciers. Here is a perfect place to stash some gear and food you don't need for an ascent of Dychtau. There are even better camp spots along the way to this point and it can be hard to make the whole distance in one day.

The grassy grounds at the junction of the glaciers is a perfect location of a base camp and you may also spend some time there studying the face of Dychtau, i.e. - checking for potential routes and how to avoid the most dangerous sections in terms of avalanche danger, rock falls etc.

Jelena recommend the following if you're short of money, wanna get some last minut training or acclimatize slowly:
Buy the Bezengi permit in the Nalchik office. Travel on local buses as fas as they go/the last village. From there you can either walk or hitch to the army base and continue in this way to Bezengi.

Beware of the guard dog in the army base at night.

No summit fee is required for any of the peaks in Bezengi.

You have to register at Camp Bezengi and the fee to be in the National Park of Bezingi is at the time writing, €3/day.

This fee includes free camping, rescue service and free acess to Camp Bezengi, whic includes a library with good photos and route descriptions of the mountains in the area. In addition you can also use the rest of the facilities at Camp Bezengi, which includes a little training room, sauna, free gear stash, safe desposit etc.

You also have to have "Bezengi" written on your invitation to Russia.

If you attempt a mountain which is at 5A/TD or more difficult you have to borrow a walkie-talkie from the administration in Camp Bezengi. You are also obligued to report to base every three hours. Exceptions are only made if you are a large party consisting of well known, experienced climbers.
Camp Bezengi lend you the walkie-talkie free of charge.

Any of the routes on Dychtau are dangerous and you are required to borrow a walkie-talkie and report to base.

The mountain is climbed during all seasons. It can be frigidly cold in the winter, but it all depends on which type of climber you are - green grass and warm sun or rough winter conditions.

Resting on the way to the peaks

Camping is allowed everywhere in Bezengi National Park. The only time you have to ask where to put the tent is close to Camp Bezengi, so you don't interefer with the plans for larger parties which the camp-administration may await.

There are accomodation available at Camp Bezengi. Prices starts at €3 for a basic room and the most expensive rooms are at €10, where you have hot shower and toilet inside the room.

Basic huts are to be found in various places in Bezengi National Park and they are free of charge.

The best alternative to find out about the present conditions on the mountain is either to call Camp Bezengi or get in contact by e-mail.
When at Camp Bezengi itself you can get updates every day in the base or via radio communication equipment from the Camp Bezengi.

Dychtau has a very complicated north face and avalanches are frequent. Huge corniches threaten to collapse at any given time and there are few "safe" routes to the summit. 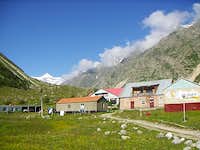 Bezengi, is according to my knowledge, the last of the Soviet era alpine bases which is still running. It was here the alpinists in the mountaineering schools started to climb the really difficult peaks and got a higher levels of alpine education. When the alpine students had reached a certain level, they were judged ready for more difficult and especially higher summits. The Pamirs with peaks over 6000 were the next destination.

There were different types of exams and a medal system. Nowadays you can still climb for certain types of diplomas. For example to achieve the Silver Stars of Bezengi, you have to climb all the 5000m peaks in the area.
See here for details. 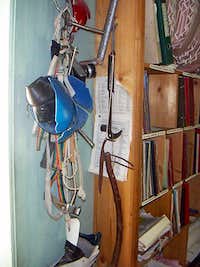 The information building in the base have a good selection of maps and route descriptions and the personal that works there, have very good first hand knowledge about the routes.

If you want to climb a route harder than 4B, you're obliged to bring a walkie-talkie (free of use, supplied by the base) and report back at pre-set intervals.

A lot of photos, route descriptions and other info

Basic route information is to be found on Kopylov's excellent site.

Jelena recommended to read an article about an ascent of Mizhirgi, a peak in the same range as Dychtau. I agree, an interesting article with nice photos.

Safety in the Caucasus

Many people seem to think the whole of the Caucasus is synonymous with extreme danger of getting kidnapped, shot or ending up in the middle of a civil war. It's not the case. Of course, Chechnya, parts of Dagestan and some of the border areas are dangerous, but the Bezengi area and almost all areas west from there are perfectly safe. If there is a danger spot close to the border, there are armed forces which keeps you away from the danger. In all valleys leading to the border to Georgia, there are army checkpoints and they will make sure you don't stray into an area where you are at danger.

Most interesting mountaineering options are west of Bezengi anyway and the only "popular" mountain east of there is Kazbek. The option of going there is sometimes dangerous and when asking about the peak I was strongly advised not to go there. I was not given any specifics about the source of danger though.