The Tyutyu massif include five independent summits – East 4400m, Main 4460m, Central 4430m, 2d West 4420m and West 4350m. The name from local language means „barberry summit“. The most long exposed and truly alpine route are from the north side. They can be reached only on foot or by helicopter from Tyutyu-sy valley. The most rocky routes are easy reachable from the Adir-sy valley (south side). Not least because of the good rode and stationary alpine base. It's a some kind of simple hostel and camping ground it the same time. It takes only 4-5 hours to access the south face of Tyutyu from here. 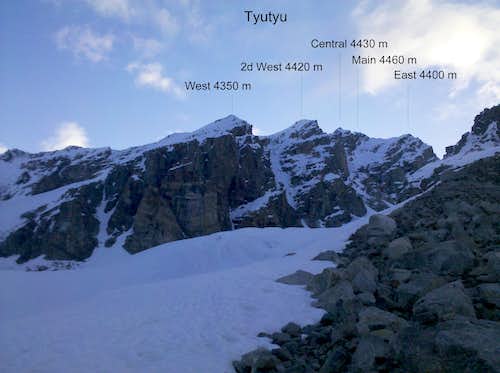 The massif of Tyutyu from South

From airport Mineralnye Vody (www.mvairport.ru) by Bus via Naltchik (en.wikipedia.org/wiki/Nalchik) to Verkniy Baksan. From her you can order a transfer to alpine base Ullu-Tau or go on foot (ca. 2,5-3 h).

It's possible to take a taxi from airport to Verkniy Baksan or even to alpine base Ullu-Tau.

On the Russian side it's forbidden climb on the summits and passes on the mane ridge (Russian-Georgian border). It' sounds stupid but unfortunately is true. But Tyutyu isn't on the border it self. So it's possible to climb those routes. In anyway your have to manage access permission for the border zone.

The best time from middle of July till end of August.

Stationary alpine base Ullu-Tau is a some kind of simple hostel and camping ground it the same time.
www.ullutau.ru/camp/ullutau/?contacts