Looking at Koshtan from the distance
Koshtan is the fourth highest mountain in Europe. It's one of the two "Brothers of Bezengi", marking the eastern end of the Northern Massif. The other brother is Dychtau, in the western end of the range which also is Europe's second highest peak.
The big pyramid of Koshtan is an impressive sight and its NW face gives you a good picture of how difficult climbing in the Caucasus can be.

There's one "easy" route on this peak, a 4A Russian grade, which corresponds to a D. The northern crest route is quite straight forward but long. Also the travel to this peak is tough and at points tricky as you has to climb the three steps of the Mizhirgi Glacier.
Most other routes on the peak are both difficult and dangerous. Some years ago a whole team of Ukrainian climbers were killed on the peak during a climbing competition.

The peak is also known as Koshtan Tau.

Michaelhaifa adds:
First ascent was made as early as 1889 by the group of G. Vulley (if I only spell his name right), who also climbed Mizirgi (5025) in the same year. In 1888 (when Mummery was the first man on the top of Dich-Tau) Vulley climbed Catin-Tau. Also he climbed Bjzeduh (beautiful mountain above Kashka-Tash glacier in Adilsu) and some other mountains, don't remember years though. Pretty heroic man... All with very basic equipment!
I assume Vulley is English (taking into consideration that most of the climbers in the central Caucasus were English). He probably climbed along the North Crest (4A) of Koshtan-Tau, as the easiest routes were usually chosen in those days. There is peak called Vulley in Adil-Su.

Some more facts: There was a German (or Austrian?) climber A. Shulze who first to climb (at the same year of 1903) - Djangi-Tau and South Ushba. Kockin stood on the top of Shchara in 1886. Gestola was climbed in the same year by C.Dent
In 1888 Kockin climbed Donguz-Orun (from South), before his Ushba climb. In 1890 he climbed Uilpata (4646m) in Zei region of the Caucasus (between Bezengi and Kazbek).
Otto Gugh climbed Shelda in 1910.
Fisher specialized in Western Caucasus(Dombay) where he climbed Dombay-Ulgen and Belalakaya in 1904.
V. Sella (who was well known mountain photographer) also made numerous climbs including Sugan-Tau(4490) in Digoria and Tepli (4427) near Kazbek.
Rebern who participated in early Everest expedition climbed Chanchahi (very tough mountain in Zei) in 1913 and Karaugom in 1914 (Zei). 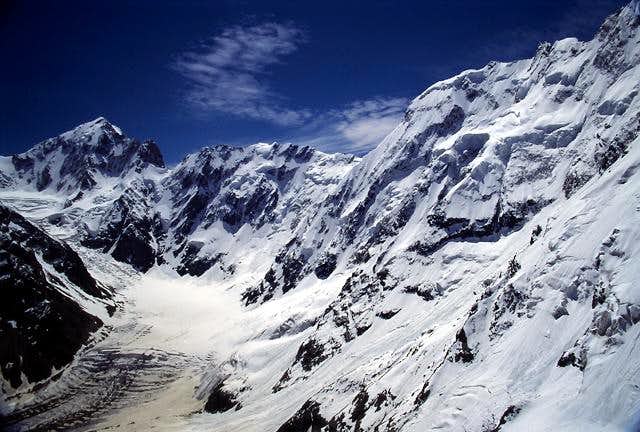 Almost the whole of the Northern Massif, seen from high on Misses Tau. From left to right: Koshtan, Tichonova and Krumkol. The massive bulk in the foreground to the right is the Dychtau massif, which consists of Mizhirgi, Borovikova, Pushkina and Dychtau main.

Most foreign climbers fly to Min Vody. A cheap and reliable airline company which serves the area is Pulkovo Airlines (nowadays called Air Russia). Usually have to stay a night in St. Petersburg. A hotel is provided by the airline, free of charge. Camp Bezengi can arrange so you get picked up at the airport. You will have to go to the little city Nalchik to get the red tape done. See below in the red tape section.

You have to arrange transport from Nalchik, a small city at the foot of the Caucasus. A minibus for 6-8 persons, cost €100. It'll take you all the way through the checkpoints along the way to Camp Bezengi. There is no regular transport and the military checkpoint on the way will bounce you if you haven't the proper documentation. If you're going with the minibus, all the red tape is taken care of by Bezengi Camp's head office in Nalchik.

Getting to the foot of the peak

Alternative one – west side.
Follow the right hand side of Mizhirgi glacier until you hit the junction of glaciers. Here is a perfect place to stash some gear and food you don't need. There are even better camp spots along the way to this point and it can be hard to make the whole distance in one day.
The grassy grounds at the junction of the glaciers is a perfect location of a camp and many climbers stash gear and food for later climbs here. Take a lot of care crossing the glacier as there are quite a lot of nasty crevasses.

Alternative two – east side.
You can also use the eastern side of the valley. The quality of the footpath is about the same as on the western side. You pass some nice side valleys leading to interesting climbing objects and when you hit the junction, look for a good spot for your tent as there are few places further up and reaching the foot of the peak in one day is difficult, especially if not acclimatized. On your way you have to negotiate the three steps of the Mizhirgi glacier. Some parts require climbing and roping up is a must if you want to play it safe. Stay on the left hand side for an easy passage, but be attentive of occasional rock-falls. Just on top of the third step there’s a flat snowfield, known as "Camp 3900" which is perfect for camping.

Early morning
No summit fee is required for any of the peaks in Bezengi.
You have to register at Camp Bezengi and the fee to be in the National Park of Bezingi is at the time writing, €3/day.
This fee includes free camping, rescue service and free access to Camp Bezengi, which includes a library with good photos and route descriptions of the mountains in the area. In addition you can also use the rest of the facilities at Camp Bezengi, which includes a little training room, sauna, free gear stash, safe deposit etc.
You also have to have "Bezengi" written on your invitation to Russia.

If you attempt a mountain which is at 5A/TD or more difficult you have to borrow a walkie-talkie from the administration in Camp Bezengi. You are also obliged to report to base every three hours. Exceptions are only made if you are a large party consisting of well known, experienced climbers.
Camp Bezengi lend you the walkie-talkie free of charge.
Any of the routes on Koshtan is potentially dangerous and you are required to borrow a walkie-talkie and report to base every three hours. The exception (requirement to report, not in terms of danger) is the northern crest route.

The mountain is climbed during all seasons. It can be frigidly cold in the winter, but it all depends on which type of climber you are - green grass and warm sun or rough winter conditions. Avalanche danger on any of the routes on Koshtan makes climbs in the winter very uncommon.

Icefalls on the glacier
Camping is allowed everywhere in Bezengi National Park. The only time you have to ask where to put the tent is close to Camp Bezengi, so you don't interfere with the plans for larger parties which the camp-administration may await.
There are accommodation available at Camp Bezengi. Prices starts at €3 for a basic room and the most expensive rooms are at €10, where you have hot shower and toilet inside the room.
Basic huts are to be found in various places in Bezengi National Park and they are free of charge.

The best alternative to find out about the present conditions on the mountain is either to call Camp Bezengi or get in contact by e-mail.
When at Camp Bezengi itself you can get updates every day in the base or via radio communication from Camp Bezengi.

For route details, go to the office in the camp. Photos, sketches and firrst hand information is readily available.

A map of the Bezengi area

it seems to be assured that Skhahara is the third highest mountain of Europe http://www.mountain.ru/article/article_display1.php?article_id=5000 http://www.8000ers.com/cms/en/download.html?func=fileinfo&id=227 so probably Koshtan has to be moved to #4

Thanks for the reminder about this. Yes, all newer information points at the fact that Koshtan is number four in Europe. I will change the information accordingly.

G. Vulley is most likely Hermann Woolley, president of Alpine Club between 1908 - 1911

Thanks for the info. I added it to the main page.