View to SE. Gumachi is the pointed peak to the right


Uyatau a.k.a. Trapetsiya and Traetzium is the easiest peak to access in the upper part of Adil Su valley. The mountain is basically one long ridge and the highest point is located at its east end. The normal route is a 1B Russian grade, which translates to PD. The peak is traversed a lot, which is a nice challenge on the mixed terrain, which ranges from pure ice climbing to some easier rock climbing. The traverse is rated 2A.

It's perfect as the first acclimatization peak because of its height and location and the views from the summit gives the climber a perfect overview of the numerous peaks in both the Adil Su valley and the surrounding valleys.

The "normal way" of arriving in the Caucasus is to fly in to Mineralniye Vody. From there the most convenient mode of transport is to go by pre-rented mini buses, but there are also good bus connections from Min Vody, to most of the main valleys of the Caucasus. If going by bus, opt for one heading for Terskol or Elbrus Village. Sometimes you have to change buses on the way, but it's not a problem as the locals are eager to help you out and will most certainly tell you when it's time to change bus. Many people also hitch hike from Min Vody. Sometimes it's a free ride, but more commonly you end up going in a mini-bus where you have to pay a small fee.

When in the main valley of Elbrus, jump your transport at Camp Adil Su, which is located half a km after Elbrus village. There is a small camp ground, hotel, bar, shop and restaurant there. You can also put excess gear in the restaurant's gear room for a small fee.

There is no public transport after this point. Walk, hitch or go by taxi. A steep asphalt road continues for 4 km. At the end of the asphalt there are some good restaurants and shops. Useful for last minute shopping.
Take a left at the junction and continue along a dirt track. After another 4 km you'll hit the entrance of Adil Su National Park, where you have to register. From here on, it's normal trekking along nice streams to the base camp of the Adil Su Valley peaks. 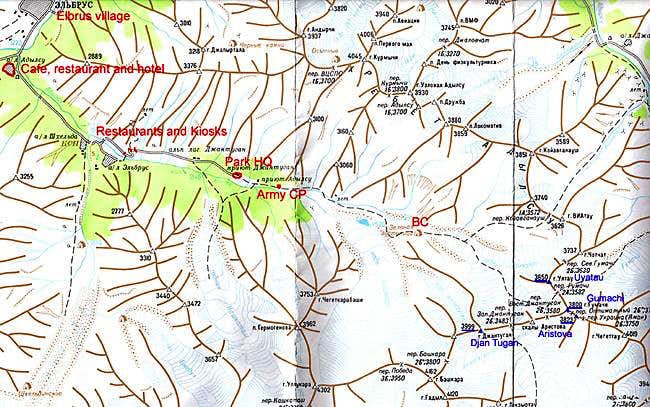 A map of the area. It may be a bit hard to read. Large version here!

A climber on the steepest part
The best season is May to September, but the peak is climbed in all seasons. Winter or off-season climbs reduce the rock fall and crevasse danger which is a potential hazard on the approach to the mountain.

Uyatau's long ridge
The locals in the area seems to be very updated on the conditions higher up in the valleys and the administrative people staying in base camp have all the information you need about the conditions on the mountain. You can also ask at the Park Head Quarters and at the army check point on the walk in to the peak.

The green walk in
Camping is allowed everywhere in the natural park. No fees. There are basic huts in the base camp, but they are in general used for either the rangers or persons who for one or the other reason need to stay inside a hut, i.e. have had an accident or are in a bad condition somehow.

The base camp at the foot of the snow fields and glaciers is grassy and there are fresh water around. What´s a bit intimidating are the piles of garbage which just lays there waiting to be picked up and brought down by the park authorities.

Mountain scenery in Adil Su
The fee of entering Adil Su National Park was € 0.6/day in the summer of 2004. Russian rubles, payable at the entrance of the park. Be sure to keep the reciept as the military guys at the checkpoint will ask for it.

You have to have "Adil Su" written on your visa invitation to Russia or the military will not let you pass the checkpoint in Adil Su Border area. The army checkpoint is located roughly a km after the entrance of the park.

There are no peak fees.


Safety in the Caucasus

On the way up. Central Adil Su Valley in the background far below
The Adil Su valley is very safe and is under strict control of the army. You are very close to the Georgian border and don't stray to far south. You will end up in hassle if caught or even seen by people "from the other side". Djan Tugan seen from the beginning of the climb
There's a great gear shop very close to the tunr off to the Adil Su valley. It's located along the main road in the Terskol Valley. I think it's called "AlpIndustria".
You can find basically everything you'll need here to very affordable prices.