Shkhara is generally considered to be Georgia's highest mountain and Europe’s fourth highest after Elbrus (5643m), Dychtau (5204m) and Koshtan (5151 m). Pushkina is higher (5100m) but forms part of Dychtau and debatably not a peak in its own right. Shkhara's altitude significantly differs between maps (see below).

Routes are Russian Grade 4B to 6B making the peak is one of Europe’s tougher mountaineering challenges. The ascent of Shkhara is actually easier from the Georgian side, starting from the UNESCO protected village of Ushguli in Upper Svaneti. Due to the region’s inaccessibility, questionable security and relatively poor facilities the mountain has seldom been climbed from this side and nearly always climbed from the Russian side.

On the Russian side the peak is located in the Bezengi region. 65km east of Mount Elbrus it contains the densest collection of high peaks and the largest glacial system in the Caucasus, the Ullu-Shiran-Bezengi. While Elbrus may be the highest mountain in Europe the Bezengi region is the true Mecca for all serious mountaineers in the Caucasus. The region takes its name from the dramatic Bezengi wall for which Shkhara marks the eastern end with Shkhara West (5057m) located nearby. This is a monumental mountain barrier rises around 2000m above the glacier for 12km without any considerable depressions. Shkhara is generally considered to be the highest point on the wall being approximately 10m higher than Dzhangi further West.

The peak was first climbed in 1888 by Almer, Cockin and Roth, which was a great mountaineering achievement at the time. Their ascent route by the NE Ridge, graded Russian 4B, is the most commonly used ascent and descent route. It finds one of the easier ways up the extensive and awe-inspiring Bezingi Wall starting from the Austrian Bivouac Hut in the Bezingi Glacier Basin. The ridge is gained from the right by crevassed snow-slopes to a level area just right of and below the point where the ridge becomes more defined (bivouac site). Now the ridge is followed on snow and ice up to the main NE Ridge of Shkhara which is followed over the East Top, 5050m, to the main summit. There is a good bivouac site below the East Top some 10 to 14 hours from the Austrian Hut, from this bivouac allow 3-4 hours to the main summit. 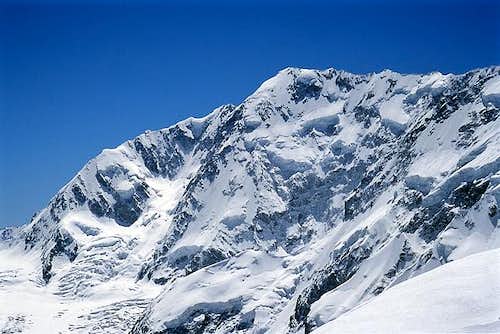 Overview of Routes and 1st Summits

Image from Elbrus 1.com The NE ridge is incorrectly marked as the 'North-West ridge'. 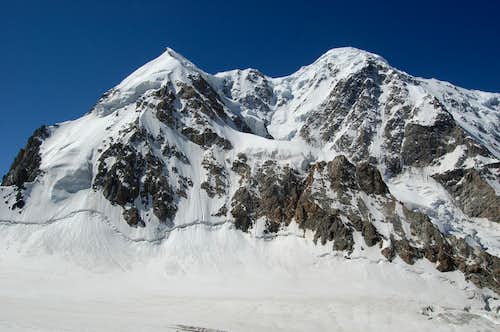 Shkhara... The North-East Ridge cuts across the photo in the foreground 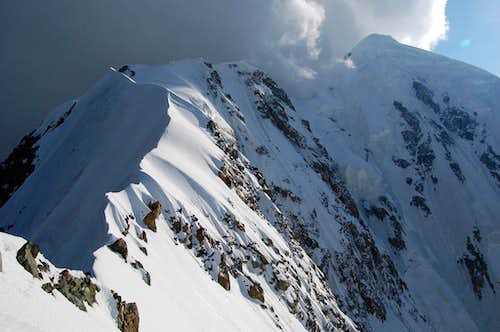 Georgian Side
The jumping off point for Shkhara on the Georgian side is village of Ushguli, the highest village in Europe at 2200m and a short distance south of the mountain. It is located in the remote region of Upper Svaneti. Kutaisi is the nearest town of significant size however the road north is in poor condition and generally impassable. The normal way to reach Ushguli is via Zugdidi and Mestia (jumping off point for Ushba). Zugdidi is easily reached by taking the other night Tbilisi-Zugdidi train. Alternatively travel by bus from Kutaisi or Batumi to Zugdidi early in the morning and make a connection. Note there is a chronic lack of accomodation in Zugdidi due to hotels being full of Abkhazia refugees. Zugidi-Mestia Jeeps pick pick up arriving passengers at the train station. The journey to Mestia follows the Inguri river and takes the best part of a day. Arrange onward transportation to Ushguli in Mestia. Nino Ratiani (see camping and accomodation section) can arrange this. The route to Shkhara from Ushguli across rolling meadows is obvious.

Russian Side
From Moscow there are daily flights to Mineralnye Vody. From the airport take a taxi to the bus station from where minibuses (Rus: marshrutkas) depart for Nalchik throughout the day. Advance tickets can be bought inside the small building adjoining the bus stands, else pay on the marshrutka. Some drivers want more money if you have large amounts of luggage although this is negotiable. A major problem with Mineralnye Vody is the police who regularly attempt to gain bribes. I was taken into four backrooms whilst on transit through Mineralnye Vody in both directions. Make sure your paperwork is in order. 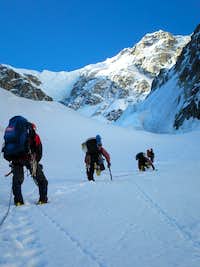 From the camp one can see only a small part of the Bezengi Wall. To reach it, you should descend from the camp straight to the tongue of the Bezengi glacier, walk along the moraine pocket, get to the glacier a little below the way up to Misses-kosh and walk along its wide plane surface for several hours. In 3-4 hours you are to get to the bottom of the Wall.

Georgia
Most nations no longer need a visa. For those that do fees have been considerably slashed compared to 2004. Consult your local embassy/consolate for further details concerning entry requirements.

Russia
Russian visas are easy to obtain these days although you still need an invitation. Many hotels are able to provide an invitation but for an independent climbing trip the most hassle-free way is to obtain an invitation via travel agent such as waytorussia.com, VisitRussia.com, or Russianvisa.com. Application can be made online and for around $30 you receive your invitation promptly in PDF form. Print this out for your visa application. Make sure you put the same cities to be visited on your visa application as on your invitation. You don’t have to stick to these places and you can simply put Moscow and St Petersburg for simplicity as I did if you choose.

No permit is required from either the Georgian or Russian sides.

Clients of Bezengi Camp have to send their documents to the camp administration in advance (preferably by email), so the driver meeting the group will have all the necessary passes with him. These pass regulations work for all clients including Russian citizens. If tourists or climbers are not the clients of Bezengi camp they should have the pass to the National Park. The park administration is situated in the center of village Kashkhatau (50 km from Bezengi Camp).

Because of Shkhara's relatively technical ascent you must borrow a walkie-talkie from the administration in Camp Bezengi. These are provided free of charge and you are required report to base camp every three hours. Exceptions are only made if you are a large party consisting of well known, experienced climbers.

Russian Side
Bezengi Camp is the main base for climbing on the Russian side. Facilities include training room, sauna, gear rental, safe desposit, etc. There is also a library containing photos and route descriptions for mountains in the area. The camp has a number of huts and cottages available and tents can also be pitched. Current prices are listed here. Away from the camp there is no charge for camping. 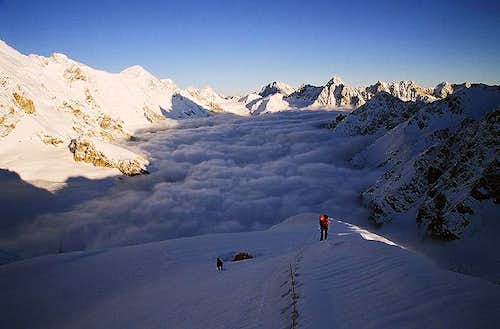 Camp I on the North Eastern ridge of Shkhara 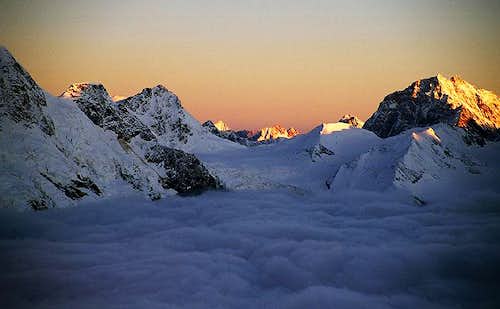 Sunrise from the camp 1 on the East ridge of Shkhara

Georgian Side
There is nothing comparable on the Georgian side. Security has significantly improved in recent years however it is prudent to seak local advice before camping away from the village.

Accomodation in Svaneti is homestay based. When travelling to Ushguli have somewhere to stay arranged in advance. In Mestia I stayed with Nino Ratiani (enquire with the Jeep driver if he hasn't already rung Nino for you). In Ushguli I stayed with Data Ratiani who is Nino's brother-in-law. These are both excellent homestays with the latter possibly being the best anywhere in Georgia! Ushguli actually consists of three settlements a short distance apart from one another. Data Ratiani lives in the upper village.

June to September is the climbing season with the best shot at good weather being July and August. After early September, the weather deteriorates and becomes colder.

Shkara's altitude is varies depending onwhich map you look at however it is generally considered to be Europe's fourth highest mountain and Georgia's highest. The Soviet military topographic 1:50,000 map indicates elevation to be 5157.8m. This map also marks a nearby peak as 5068m for which Shkhara's height is also commonly quoted as being. This corelates well with the EWP/WCP map that marks Shkhara's high point as 5201m with a 5068m sub-peak to the west.
Interestingly the Russian Climbing Federation book states Shkhara's main summit is 5068m with Dzhangi quoted as 5085m. Whether their estimation bares any relation to the sub-peak marked on the Soviet map or whether this is a coincidence is unclear. The height of Dzhangi, also on the Bezengi wall to the NW, also varies from map to map with quotes of 5085m, 5058m and 5051m. Despite the Russian Climbing Federation's estimations Shkhara is generally considered to be higher than Dzhangi. (Info with help from Corax).

EWP produce a number of topographical map/guides for the Caucasus region. The following provide coverage of the Bezengi region:

Shkhara from the Georgian side

Unfortunately the Northern Caucasus is synonymous with separatist movements, crime and kidnapping because of the affairs in Chechnya, Dagestan and Ingushetia. The Russian province of Kabardino-Balkaria where Bezengi and Elbrus are located is frequented by climbers and is relatively safe however.

Only a few years ago nearly all foreign offices advised against travel to the Upper Svaneti region of Georgia because of persistant banditry in the area. Security has improved remarkably in recent years with both British and US foreign offices merely advising people to be vigilant, review their personal security precautions, and take appropriate security measures. I would personally recommend that you have accommodation arranged in Ushguli before you arrive. The main issue on the Georgian side is the lack of emergency/rescue assistance, which you would expect on the Russian side. It can also be difficult to get accurate information on mountain conditions.

elbrus1 Excellent photos and information about the Bezengi region

Ari's Base Camp Good general climbing information in the Caucasus

I'll update tomorrow. I have the 'old maps' as well! Great photos by the way.

The mountain is 5193m high. I surveyed it with DGPS in 2010. http://en.wikipedia.org/wiki/Shkhara#cite_ref-height_0-0 http://www.mountain.ru/article/article_display1.php?article_id=5000

As of September 2011, the improvements on the road from Zugdidi to Mestia were completed, the road is now widened and paved allowing for travel by marshrutka (minibus) to Mestia, in much less time, two hours or less. There are also plans to improve the road from Mestia to Ushguli, though I don't know when this slated to happen, or if it has already. I stayed with the Ratiani family in Mestia, and they were very helpful in arranging transport to Ushguli. In Ushguli, to save time/energy you may consider renting horses to carry you and/or your gear to the foot of the mountain.. this is very inexpensive. Happy travels!

The ascent is NOT easier from Georgian side. The easiest option is the right S pillar at 5B. I climbed and skied (what had snow) that in 2010. The 4B route is NOT 4B - I attempted it in 2011. Glacier retreat, steep ascents and re-ascents make it difficult and long, plus its illegal because you cross into Russian territory. I gave up on that pretty fast. It used to a descent route, nowadays descending the S pillar is what people do. As such, the 5A route from Russia is the easiest route.