While reading "Idaho A Climbing Guide" by Tom Lopez I came across this brief description of a climb that had been done on Mt Borah's East Face in 1962 by Lyman Dye and Wayne Boyer, two pioneers of Idaho mountaineering.
East Face (II, 5.2). Climb the face from the notch on the northeast ridge (between the summit and Point 12247). Climb to the notch from Rock Creek which is just to the north. The crux of the climb is the first 90-foot pitch out of the notch. The angle decreases and the holds improve above this pitch. First ascent: L Dye, W Boyer in 1962
For decades I assumed that they had gone up Rock Creek (the standard approach to the North Face) to reach Point 12247 and from there climbed the Northeast ridge to the summit. While the Northeast ridge does provide a great view of the upper East Face and there is a traverse that cuts across the face, it leads directly to the summit so I never understood how they could call their route the "East Face". After reading the above description dozen of times and closely studying a topo, I realized that they must have gone up Rock Creek on the Pahsimeroi (east) side of the range. Rock Creek leads to the upper East Face, one drainage north of the East Face cirque where we had climbed in 2011 and 2012. Everything seemed clear to me now except for one detail and that was how they got to the notch between point 12247 and the summit. Being more than curious at this point, I contacted Tom Lopez to see if he had any more information about this route.  Unfortunately he had none but he did tell me that Lyman was still alive and living in Idaho. Using this lead I was able to get in contact with Lyman and he most graciously provided me with all of the pictures and information for this route page. He also told me that he climbed Mt Borah last year at the age of 80, but that would be his last trip due to his doctor's orders.
I was greatly honored that Lyman would share this little slice of Idaho's early mountaineering history and am using his description and photos for the route information. Lyman writes:
"I started climbing Borah in 1957, done it in winter and helped with search for Guy Campbell and Vaughn Howard when they went missing after an attempt after Thanksgiving one year. Those were some of the most horrendous conditions I have ever seen on the mountain. Art Barnes and Wayne Boyer were with me on just about all of the climbs in the Little and Big Lost Rivers, and the White Clouds. We had a climbing group called the EE-DA-HOW Mountaineers. Wayne , his sons and I were on Borah a year ago last August when I was 80. It had been 57 years ago we climbed it together for the first time. Doctor says no more high elevations for me, sadly enough. We have been on it in almost every condition you can imagine.  Winter, spring, summer and fall. Not many areas on the mountain I haven't been on at least once. When I lived in Arco, Borah or King mountains were the conditioning climbs when each climbing season began in the spring."

"If you will look at the pictures I sent you together as a group, at the very first mailing to you. The first picture had the Borah east buttress and the ridge coming off to the left. There is an angular ascending snowfield up to the ridge out of the canyon, that is where we gained the ridge crest and dropped over the east ridge then contoured over to the big lower snowfield at the base of the face." 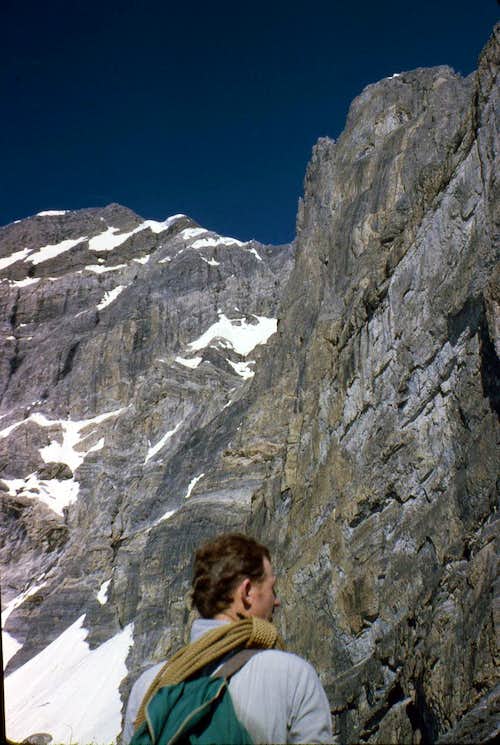 Lyman in profile near the East Buttress
"If you will look at the second picture in the group of pics I sent you, there is a pic of me in profile near the east buttress. To the left of my shoulder you will see two snow fingers protruding upward to the right like tepees. The second one of those has a small snow patch up in the couloir above and to the right. We went up the rock face above that little patch, in and out of the crack, on the left side up to the thin snow finger, that ascends upperward  to the right, at the head of the finger to the right, at that point we left the snow and climbed up the cliff formation past the black rock outcropping to the upper snow field. There are two exit cracks that go up to the northeast ridge about half way across the snowfield. I weighed taking one of those to the summit ridge but we had been out on that face for around three hours and we decided to go to the saddle and relax for a few minutes and have something to eat. I looked over the cliff formation and didn't think it looked all that bad and put all my hardware in my pack and started up the cliff. I got about 40 feet up and got hung up under a little shelf. I could feel a crack with the tips of my fingers and would like to have had a piton or something to jam down in it for leverage, but everything was tucked away in my pack. I thought about down climbing and trying a different angle but didn't like that feeling either. My legs were doing the piano dance by this time and so I figured I was probably going to peal out of there and fall or make a lunge for the crack and go for it."

"The rest of the way to the summit was uneventful, a breeze so to speak. We dropped off the summit to the south to the first notch, and then set up rappels to get back down off the face. If I had paid more attention to the picture of me with the buttress I would have seen the route sooner I think.  The snow in your picture of the face (2012) is not any where as definitive as it is in the second picture. We had bigger snowfields when we did it than when you were up there."
Lyman Dye 2014

From Mackay, Idaho take Highway 93 north for approximately 22 miles (2 miles north of the Mt Borah access road) and turn right on the Doublespring Pass road (Forest Service Road 116). Follow the "improved" dirt road for about 7 miles to the summit of Doublespring Pass and then drive another 3 miles to the junction of Forest Service Road 117 on the right. The road takes off up a hard switchback and here the real adventure begins. There used to be a sign that indicated Horse Heaven Pass but I don't know if it's still there. Signs have a way of attracting bullets (just like cow pies and flies) in this country. Follow this road for about 1.25 miles to the first junction and take the right hand fork to Horse Heaven Pass. From Horse Heaven Pass drive another 2 miles to the next junction where again you turn right. Continue on Forest Service Road 116 for another 7 miles to the junction of the East Fork and West Fork of the Pahsimeroi River. Follow the West Fork junction to where the road ends at the unimproved campsite. I found it easier to start up the hill a little north of the parking spot to avoid the brush below the timber. As you gain elevation look for the narrow ridge that separates the Sacajawea and East Face cirques for the easiest way through the timber. This approach is approximately 2.5 miles and leads directly to the East Face cirque.

The approach is not in any way straight forward. The Pahsimeroi Valley to the east of the Lost River Range is a complex network of back roads, jeep trails and four-wheeler paths. Finding the right drive in is tricky (good luck in the dark) and high clearance four-wheel drive vehicles are mandatory.
The Dye/Boyer approach started at Rock Creek, the second creek crossing you will encounter on this drive. Rock Creek is one mile from the junction of the East Fork and West Fork of the Pahsimeroi Rivers. Park before you cross Rock Creek and it's approximately a five mile bushwhack up the drainage to the cirque. This approach is a longer hike than the one described above and it requires climbing over the upper East Ridge that divides the two faces but it eliminates driving the last 4-5 brutal miles to the campsite at the end of the road.