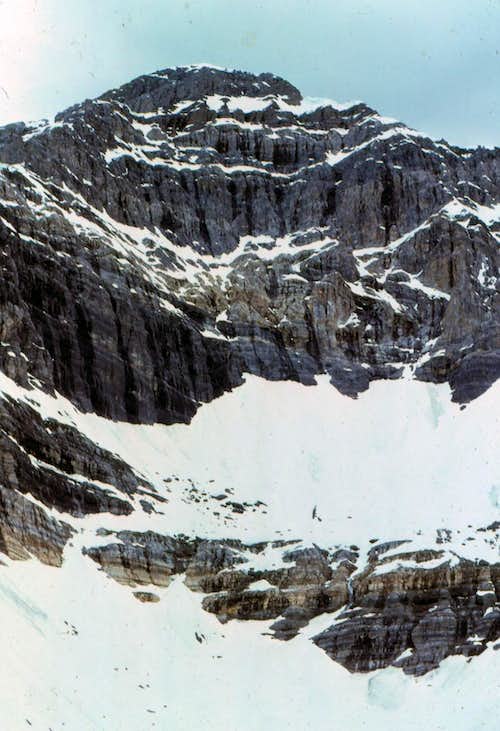 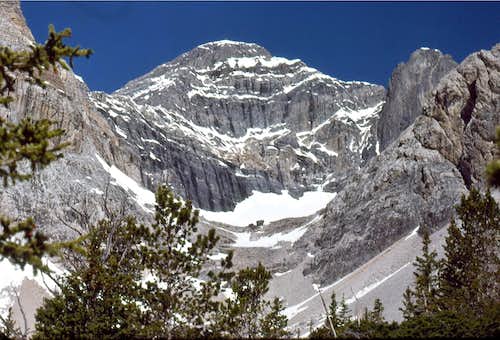 The East Face of Mt Borah - June 1977
The 2400' East Face of Mount Borah is one of the many gems Idaho has to offer. There have been very few recorded attempts on this face and several factors contribute to this.
Timing during the year is crucial for success. Up until the early 90s the face held more year-round snow and ice as can be seen in the photos that are posted here. In the past teams had been stormed off and serious rock fall prohibited any upward progress. Prolonged drought beginning in the late 70s and a warming climate has resulted in this face being left mostly bare of snow and ice during Idaho's hot, dry summers of recent. The face is now a very quiet place compared to the near past. A geological survey of glaciers in the West confirms this: Glaciers of Idaho The approach is not in any way straight forward. The Pahsimeroi Valley to the east of the Lost River Range is a complex network of back roads, jeep trails and four-wheeler paths. Finding the right drive in is tricky (good luck in the dark) and high clearance four-wheel drive vehicles are mandatory.
Because it is so remote and other faces take the spot light, the East Face has remained hidden and overlooked for many decades. Don't be fooled, this is one of the best gems in the gem state. During the summers of 2011 and 2012 three new routes have been put up on this face: East Face Routes 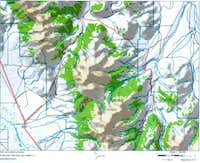 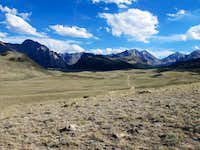 Warning Sign
From Mackay, Idaho take Highway 93 north for approximately 22 miles (2 miles north of the Mt Borah access road) and turn right on the Doublespring Pass road (Forest Service Road 116). Follow the "improved" dirt road for about 7 miles to the summit of Doublespring Pass and then drive another 3 miles to the junction of Forest Service Road 117 on the right. The road takes off up a hard switchback and here the real adventure begins. There used to be a sign that indicated Horse Heaven Pass but I don't know if it's still there. Signs have a way of attracting bullets (just like cow pies and flies) in this country. Follow this road for about 1.25 miles to the first junction and take the right hand fork to Horse Heaven Pass. From Horse Heaven Pass drive another 2 miles to the next junction where again you turn right. Continue on Forest Service Road 116 for another 7 miles to the junction of the East Fork and West Fork of the Pahsimeroi River. Follow the West Fork junction to where the road ends at the unimproved campsite. I found it easier to start up the hill a little north of the parking spot to avoid the brush below the timber. As you gain elevation look for the narrow ridge that separates the Sacajawea and East Face cirques for the easiest way through the timber. NOTE: Come well prepared and plan for self-sufficient travel in this remote country. Cell phones and satellite phones may not be reliable in some locations and there can be long distances between good water sources in the late season. 2-ply sidewalls and tubeless tires might not survive this trip so make sure your spare is full-sized, inflated and you know where the jack is and how to use it. Don't forget your lug wrench. If you break down in this country or get snowed in you may have to walk out. Search and rescue in this range can be very difficult, expensive and a real burden on the local law enforcement and Forest Service staffs who are the first to be called for emergencies in this area. 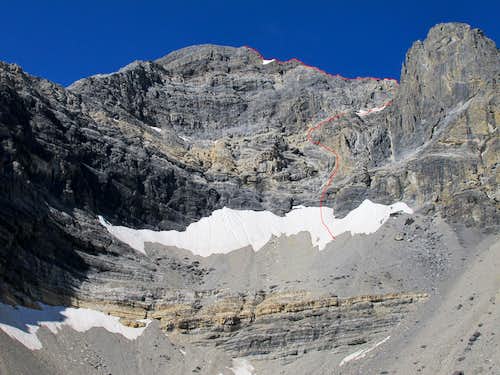 Route Photo
While this route is not overly difficult, it does require a willingness to climb with long run-outs and minimal protection both at belays and while leading. Many of our belays were protected with a single piece of gear and most pitches only allowed for a few placements. Rockfall, both self-initiated and trundled from the summit is an ever present danger on this route. The route starts slightly to the right of Wes Collins' Dirty Traverse route and follows the slab like ramps for about 6 pitches of 4th and low to moderate 5th class climbing until you reach the ledge system that allows for an exit to the Northeast Ridge. From there we climbed 2 pitches of very steep snow and joined the ridge. On the Northeast Ridge we encountered a short section of water ice (WI2) and several more pitches of moderate 5th class climbing until just below the summit, where it turns to easy, but very loose 3rd and 4th class climbing. This route is probably best done when there is some remaining snow to cover loose scree and talus (June - July) and during some years it may not be climbable at all due to the large cornice that can form and block the narrow exit to the Northeast Ridge. Parties willing to solo or simul-climb can reduce the overall number of pitches required on this route.

Because the rock is a mix between Dolomite (the Jefferson Dolomite formation) and limestone, the rock fractures in small seams. Much of the protection you can find is half inch or smaller. A healthy selection of smaller wires, (Nuts) and as many small cams as you can find is recommend for most climbing on this face. Many placements were finger cracks and smaller. Leave the big stuff home. Bring a dozen slings to extend your placements and to loop around horns as well. This is a mixed climbed that involves several sections of steep snow and (during our climb) we found a short, steep pitch with water ice (WI2) at the start of the Northeast Ridge. Crampons and a single axe were sufficient for our climb but at certain times of year there may be more ice. We did not need ice pro but again this is conditional depending upon the time of year you climb and how you finish the ridge. If you plan to finish on the summit couloir then ice screws and two tools are highly recommended. We took a light rack and it didn't take but a couple of pitches to decide that we were not going to retreat off this face unless we were blocked by some unseen obstruction higher up. The rock is good but all of the ledges are covered with rubble and the anchors are few. From my experience, rappelling off steep Lost River faces is the last option you want to use if at all possible. Rockfall is a given in this range so a helmet is highly recommended. 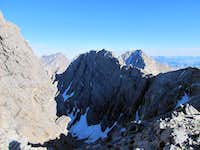 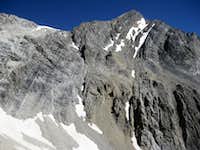 Descent Route
Having left our camp at the end of the road on the West Fork of the Pahsimeroi River, we descended the steep and very loose class III/IV South Face of Mt Borah into the Sacajawea drainage. We descended to the upper saddle by way of the standard (Chicken-Out-Ridge) route and then turned down the face just below the cliff band. We wisely avoided the gully (left of center) and zig-zagged down the face to avoid the cliff bands. See Wes Collins' The Exit on his Dirty Traverse page for more details of the descent. Another option would be to descend by way of the Southwest Chicken-Out-Ridge but that would involve some kind of shuttle to get to the approach from the Pahsimeroi River and assumes that you do make it to the summit.

The Joe T. Fallini Campground (formerly Mackay Reservoir Recreation Site) is the only recreational
site in Challis that offers full RV hookups and features a diversity of other facilities.