This route is like a gorgeous date, who has been divorced three times.  Have fun, but don't get run over by the baggage cart.

Any excuse to spend time on the east slope of this range is a good excuse.  The approach up the canyon between Borah and Sacajawea's east ridges is a treat all by itself.

The route is a clean, obvious line and the technical difficulties are high enough to keep you entertained but not so high as to leave you in terror.

The reason it is a snow/ice route on a south slope, at a relatively low altitude, well into the summer, is that snow, a lot of snow, gets blown up and over the west face, forming a huge cornice on the saddle above Chicken Out Ridge, and other deposits on the south and east faces. The cornice and the other deposits regularly avalanche into and load up this couloir.  The goal is to hit the route early enough in the year that there is plentiful snow; late enough in the season that the cornice has collapsed and swept the route of its avalanche tendencies, and; early enough in the year and day that it is still cold enough to keep the sun from turning the south facing snow to soup before you get off the top.

The descent.  There are several bad options, and no good options.  See the route description.

From the Leatherman Trailhead on the West Fork of the Pahsimeroi River, head due west up the slope into the narrow canyon between Borah's and Sacajawea's east ridges.

The route is the obvious couloir at the intersection of the south face of Borah and the east face of Borah's west ridge. Hostilities start on the snow ramp at the bottom of the couloir at about 10,500 feet and end at about 11,700 feet where the couloir ends at the north end of the saddle between Chicken Out Ridge and the final summit pyramid.

In the image below, the route runs from lower left to the notch at the top center. 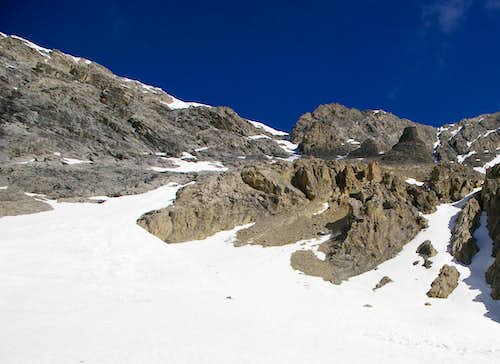 The couloir varies in width from about 6 feet to about 50 feet.  It gets gradually steeper to about mid height, after which the angle eases slighly.  The average slope is a couple degrees lower than that of the N. Face, but depending on how the snow accumulates there can be short sections approaching vertical.  Water ice is possible in some of the narrow sections.  Depending on the season, the snow may not be continuous.

The image below shows Alex Urfer above the top of the snow, about 50 feet from the saddle between Chicken Out Ridge and Borah's summit pyramid, with Leatherman on the skyline. 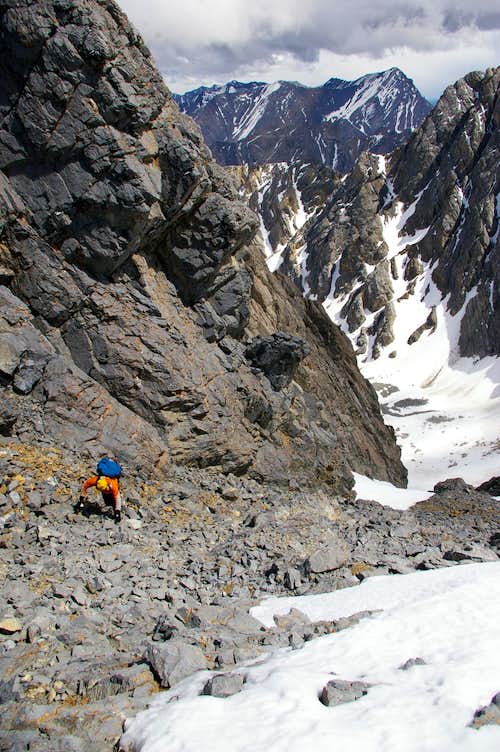 If continuing on to the summit from the top of the couloir, follow the ledges and paths of the standard route.

Re the Grade Rating:  The route itself is probably only a III, however complications of the descent, particularly if conditions deteriorate, raise it to a IV.  Most parties, especially those who go to the summit, should prepare for a very long day.

Descent options, in rough order of undesirability.  Note: There are no good options.

1.  Descend the west ridge / standard route.  Yes, this involves a shuttle of some sort from the west side of the range back to the east side, or vice versa.

3.  Traverse Sacajawea Peak from north to south and descend the talus on the east side of Sacajawea's south ridge. This may be the best option, but in early season, expect snow on Sacajawea's NW ridge.  Depending on conditions and capabilities of the crew, and if a trip to the summit is involved, a bivy and a second day might be in the offing.

5.  Descend the ramps and ledges that diagonal up (to the NW) from the base of the north face of Sacajawea Peak. This is the path we took. Not recommended.  As a couple others have mentioned, this option consists of loose rock, off-angle ramps with rounded edges, covered with scree, water, melting and/or loose snow, and a complete absence of belay/rappel anchors.  Special note:  Depending on conditions, time of year, skill levels of those involved, etc., reserve plenty of time.  It is not hard, but it is both dangerous and remote. Extreme caution advised. Did I mention this option is not recommended?

The image below shows Option 5, from roughly the center sky line, down and left, via the maze of ramps. 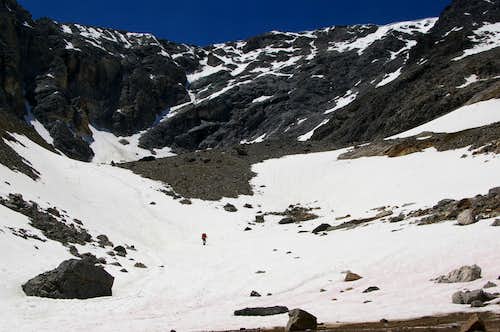 A few slings, and a small rack of nuts up to about 3/4 inch.  One or two small to medium cams.  If descending the route is in the plan, 10 to 12 pickets for rappel anchors.