The Wildest in Great Falls 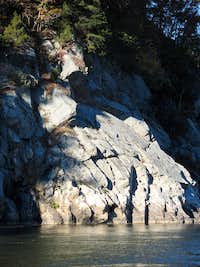 There is little in the Washington, D.C. region that has anything close to the feel of real wilderness. Echo Rock is one such place. Situated close to the downstream end of Mather Gorge, where the good climbing crags of the Great Falls area are concentrated, this long series of high cliffs, which may actually be the highest in Mather Gorge from base to top, is virtually unknown to climbers. Access to the upstream end of the cliffs is via scrambling on and among smooth boulders, access to the downstream end is via bushwhacking through steep woods that hide rocks and ankle-turning depressions, and access to the middle of the crag is via rappelling, as there are no breaks in the cliffs and the cliffs rise directly from the Potomac River.

Yet another factor keeping Echo Rock practically untouched is its distance from the nearest parking areas. It is about one mile from the Great Falls Park Visitor Center. That is not a long distance, but considering the facts that there are well-established climbing areas much closer to the main parking areas and there are maintained trails leading to them, the distance to the crag is comparatively epic.

Finally, the crags have also seen few climbers and little development (a good thing, in my opinion-- just get out and climb something cool and have fun doing it) because most climbs here have been led but most people at Great Falls toprope the routes.  And toproping is not pleasant here because of the brushy approaches to the clifftops and the dirty, brushy conditions at them.

Echo Rock is just waiting for climbers with a sense of adventure to probe its faces, corners, cracks, and overhangs. The central section is especially ripe for exploration, as there is no way to reach the base except by rappelling. The clifftops themselves are topped by steep slopes consisting of dirt and vegetation, much of it pine trees.

I have found information on only two established climbs and four named traverses at Echo Rock. Both climbs are 70', which is as long as it gets at Great Falls, and both are accessible by foot from the upstream end of the crag. The precise locations of the four traverses are no longer known or are kept secret. Following are brief overviews for anyone who cares to go looking for them; please note that the PATC guide referenced in the External Links section does not show locations or diagrams of these routes.

Climbs:
Life on Planet Groove (5.6, 70')-- This starts about 100' downstream from Cow Hoof Rock shortly before downstream travel becomes impossible without a rope due to the fact that the cliffs rise straight from the water. Cow Hoof is an obvious crag set back in the woods a bit, but it is still clearly visible from the river. Life on Planet Groove starts at a crack below a dihedral, follows a finger crack to a ledge, then follows a slightly wider crack up to and left of an overhang. A harder variation is to climb the crack through the overhang.

Walk the Plank (5.7, 70')-- This one starts about 150' downstream from Cow Hoof and follows flakes and cracks up a wall.
Note that these might seem harder than the grade since it has been decades since people climbed them with anything approaching regularity and that standards may have changed since then.

Traverses:
Waterline-- As the name suggests, it follows the cliffs along the river's edge.
Donald Ducks-- This one goes along the cliffs at about mid-height. The name comes from the "phenomenal plunges" route pioneers Donald Hubbard and Donald Jacobs took while working on the route. Hubbard was the first to actually complete the route (1940).
Big Toe-- Goes along the cliff above Donald Ducks.
Climb to the Woods-- Rain gets the credit for this one. The route pioneers had to get off the rocks before rain came, and thus a new route was born. The guidebook referenced in External Links contains a nebulous description based on the pioneers' notes.

I was able to follow a traverse from the downstream end to the end of one major section of cliffs, about a third of the way along the entire Echo Rock area. I had to access the route by bushwhacking down steep terrain from a hiking trail above. Along the traverse, I found mostly Class 3 terrain, but there were short stretches of exposed Class 5; a fall here probably means falling into the river. Near the end of the traverse are some interesting arch-like formations not otherwise visible unless one is in a kayak (see the last photo in the sequence below).

This is not the shortest but is rather the easiest and safest way to approach the crag.

Hike toward the river and turn right on the River Trail. About a mile from the parking area, the trail drops to the river where a road (not open to the public) ends at the water’s edge. Follow the trail further downstream to an obvious rocky area and start looking for the crags pictured on this page.

The park is open from 7 A.M. until dark every day except Christmas. There is an admission fee, good for three days, of $5 per vehicle or $3 per person entering on foot or by bicycle. Annual and interagency passes are also available (the latter costs $80).

Altering the rock to place gear is prohibited.

Great Falls NPS Site
A great resource is the PATC Climbers' Guide, which focuses just on the Great Falls area.