Even though they are close to the parking area and have several nice climbing routes, the Bulges see little use compared to nearby Carderock and the crags on the Virginia side of Great Falls.

The Bulges are two prominent outcrops located near the beginning of the first, most popular, and most rugged section of the Billy Goat Trail. They face the Rocky Islands and also face west, making for good afternoon climbing from fall through early spring. The heat and the humidity the rest of the year, and the sweat they generate, make afternoon climbing uncomfortable and potentially more dangerous.

The upstream crag is Little Bulge, and the downstream one is called Great Falls Bulge. They offer easy and fast access and climbs from 30 to 60 vertical feet, meaning a motivated climber can do several routes in a single day.

•First Lead Corner (5.2)—This one is a bit brushy, probably a sign that there is little climbing activity here.
•Greyish Face (5.4)
•Purple Face (5.10)
•FUBAR (5.9)
•Orange Groove (5.9)
•The Black Bulge (5.4)—How this is just 5.4 I have no idea. The start is harder than that. I suspect this is one of the many sandbag routes in the area, routes rated before YDS expanded past 5.9 but which were not updated. Beautiful rock and route, though.

These crags serve as a reminder, as if one is needed, that ratings are subjective. I felt very humbled here for being unable to free solo a 5.2, but later in the day, at a different crag, I had an easy time free soloing a 5.4. There are, though, a few Class 3-4 scrambling options on both crags in addition to the Class 3 descent routes. And you can be creative, too; I climbed Great Falls Bulge by completing the first two sections of Peg’s Progress and then finding an alternate route to finish, putting the climb in the 5.1-5.2 range, great fun for those who enjoy challenging scrambles.

Most climbers at Great Falls practice toproping because of the abundance of natural anchors, the top-to-bottom approaches, and the slick rock that has been known to spit protection out. The routes are not bolted, and it is illegal to place new bolts or alter the rock in any other way. 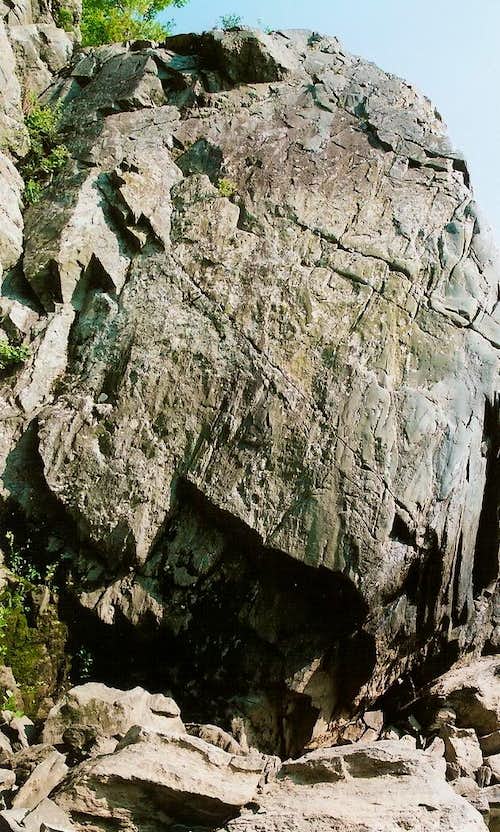 To reach C&O Canal NHP, where the Maryland Great Falls Crags are— From I-495, take Exit 41, just north of the Virginia line, heading west on the Clara Barton Parkway and then onto MacArthur Boulevard. MacArthur leads directly to the park entrance at Great Falls Tavern.

Hike south to the Billy Goat Trail and turn onto it. As you near the river, leave the trail and find a way down (several ways in Class 3 range). There are signs asking you not to leave the trail, so try to walk on rocks and roots as much as possible to avoid further eroding the soil.

From the parking area, the Bulges are about half a mile’s walk away.

An excellent resource for the area is Eric Horst’s Rock Climbing Virginia, West Virginia, and Maryland. The section on Great Falls provides one-sentence overviews of the routes. Also, consider the PATC Climbers' Guide. It focuses just on the Great Falls area and details more crags and routes than the other guide does.