The approach begins at either the lower South Colony Lake or upper South Colony Lake depending on where you camp. From the lower lake, turn left at the "Crestone Needle Standard Route" sign and head west toward Broken Hand pass. The trail will climb up toward broken hand pass. At the second large cairn (which will be the actual third cairn), leave the trail to the NW and begin to make your way across the talus and gullies toward the base of the peak. The route begins to the left (south) of the arete on the west side of the lower lake. Do not attempt to circle around the north end of the lower lake. The bushes on the north side of the lower lake are impassable.

The approach from the upper lake circles to either side of the lake ending at the SW side. From the SW side of the upper lake, hike south along the mountain until reaching the beginning of the route. Another variation begins at a large crack at the top of a talus cone above the upper lake. This is considered the direct start and saves distance in traversing class 3 and 4 terrain. Some say the direct start is faster, but others say it's slower, but more fun, because you get another pitch of 5.4 climbing. Either way gets you to the arete where the real climbing begins.

The time required, as indicated at the top of the page, says "A long day." That means it's a long day from South Colony Lakes. If attempting this route from the 2WD parking lot/trailhead 4.5 miles away, plan on an extremely long day.

From the left ledges route: Climb class 3 and 4 grassy ledges while traversing north and gaining altitude towards the arete. A large red tower feature will greet you when you arrive at the arete. There is a couple of low class 5 moves at and above the red tower. Some people rope up at the tower, some don’t. Use your own judgment. The class 3 and 4 climbing from the red knob to the headwall is about 1000 ft and can be very exposed at times, generally moving up from ledge to ledge. As before, some do this section unroped, roped or simul-climbed. It will be a very long day if roped for this entire section. At the headwall, stay right for about 190 ft of 5.5 crack/chimney. There are several fixed pins on this pitch. At the top of this pitch, exit and climb a chute/gully up and to the left to a large ledge to begin the 5.7 crack, also with fixed pins. This 200-foot, 5.7 pitch is the crux of the standard route. It is easy to protect and holds are abundant. There are several other options at the headwall including a 5.9 variation and a different 5.7 crack/chimney at the second pitch. After the 2nd pitch, it’s a short scramble to the summit. Note: The crux 5.7 pitch is awkward with a pack.

The descent generally follows cairns down the South Face class 3 route to Broken Hand Pass then down the east side to South Colony Lakes. From the summit, follow the ridge heading south and following cairns. Descend into the left-hand gully. At the bottom of the gully from the summit there is a grassy bench where the cairns and a trail split into two directions. Go left at the bottom of the gully and follow a climber's trail to a short class 3 ascent up to a large cairn. Scramble up to the cairn and you will see more cairns and a trail heading south toward Broken Hand Pass. If going to Cottonwood Lake/Trailhead go right and downhill at the bottom of the gully. 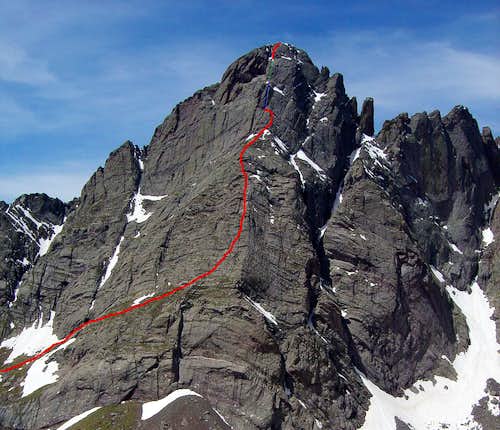 Click this link for a close-up of the headwall

Photo by Mots010 with route annotated by attm.

This is a technical rock climb in an alpine environment. Highly recommend a helmet, extra food, water, bomber rain gear, and an emergency bivy sack. There have been many who have done unplanned bivys on the descent. Recommend an ice axe for the descent if there is snow on the east slope of Broken Hand Pass. Small to medium pro, set of stoppers, and several shoulder-length runners. There are old fixed pins on both of the upper pitches that are usable. One 60 m rope will do since no rappel is required.

Violent thunderstorms are a daily occurrence in the summer. Bailing options are limited if high on the route. Best to summit, then seek shelter in the descent gully. Best to bivy if you find yourself on the descent in the dark. Even though the descent is is class 3, it can quickly turn to class 4 or 5 with a wrong turn. It is a tricky descent route, even in the daylight.

Click here for an outstanding Topo of the Route by Gary Clark.

Check out this 18 minute video of a climb of the Ellingwood Arete in July 2006. High speed connection recommended.

Another video of a climb of the Arete in 2009 by Andy Leach, Fabio Somenzi, Jackie Ellis and Alan Ellis: YouTube Video of Ellingwood Arete Climb