This is the easiest route on Crestone Needle. This route description is also the "dry version (no snow or ice)" as opposed to this version which is a snow climbing description.

This version involves Class 3 or 4 climbing, and depending on your route choices, the climbing could involve considerable exposure. Be prepared for any conditions on this route, and do not attempt the route in wet conditions of any sort if you have no experience in climbing on the Sangre conglomerate rock, or if your experience with exposure is limited.

From Westcliffe, Colorado: Drive southwest on highway 69 about 4.5 miles to Colfax Lane (CO119) where there is a Forest Service sign. Turn right (south) and go another 5.5 miles until the road ends, then turn right (going west) on South Colony Road (Forest Service Road 120) for 1.5 miles where there is a fairly large parking lot on the right. Low-clearance vehicles can park here but recent improvements in the road (July 2006) allow 2WD vehicles to continue for another 2.6 miles to a new gate and parking lot (30 vehicles) located approximately a half-mile past the Rainbow Trail marker.

The road is closed at the gate and the parking lot. From the gate west of the Rainbow Trail, it is a 4.5 mile hike to South Colony basin. From the new gate, follow the old road for another 3.5 miles until the road turns into a trail. Upon arrival at lower South Colony lake, the trail forks and a small wooden sign (photo) will greet you. The sign says, "Crestone Needle Standard Route," with an arrow pointing to the left. Take the left fork to begin the approach to Broken Hand Pass. Take the right fork if looking for a campsite or if heading for the upper lake to do the Ellingwood Arete.

See the left side-bar for a list of summit routes which begin at lower South Colony Lake.

SEVERAL OLDER GUIDEBOOKS WILL HAVE THE ROAD GOING MUCH HIGHER TO WITHIN 2 MILES OF THE LAKES; HOWEVER:    SOUTH COLONY ROAD IS NOW PERMANENTLY CLOSED APPROXIMATELY 2.6 MILES PAST THE LOWER PARKING LOT (ONE-HALF MILE PAST THE RAINBOW TRAIL MARKER). AT THE CLOSURE POINT, THERE IS A NEW GATE AND PARKING FOR APPROXIMATELY 30 VEHICLES. 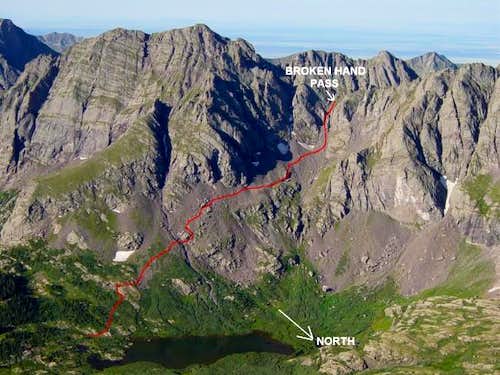 From the end of the South Colony 4WD jeep road from hell, follow the road as it heads west, then contours north on Broken Hand Peak's east slopes. The road reduces to a wide and worn trail near South Colony Lake as it heads west. The well-constructed trail climbs via switchbacks through the talus and boulders on Broken Hand's north slopes and winds its way into the couloir leading to Broken Hand Pass. The ascent to the pass is very direct and steep, and borders on Class 3 in difficulty.

At the narrow saddle, hang a sharp right on a climber's trail that contours northwest on the southwest side of the Needle's complex southeast ridge. Stay on the trail as it climbs to around 13,300 feet. Be wary of side trails that may be dead ends and lead you off route.

The trail will soon deposit you into the famous East Couloir, known for its solid rock climbing. Note some features in your surroundings. It is important that you return to this spot on your descent! (See NOTES SECTION below). Climb up the couloir (Class 3). About half way up, the climbing gets very steep and you'll get channeled into some narrow spots that make the climbing challenging but fun. If you avoid the narrow spots, be advised the climbing could become exposed Class 4 climbing. Difficulties relent further up and climbing is good until you just about run out of mountain, where some loose talus may be encountered in a more level, shallow spot. 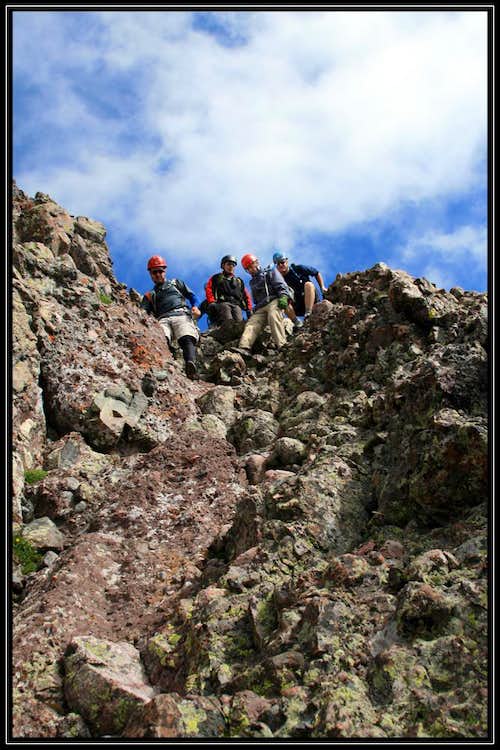 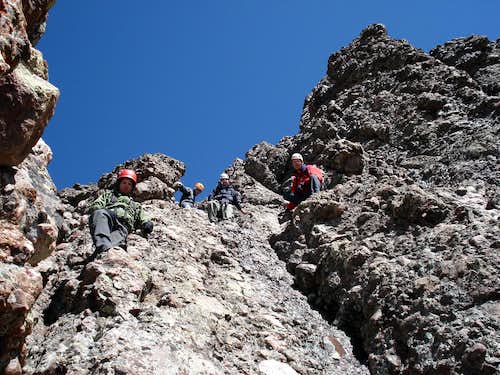 An option to avoid the narrow spots or extended exposure is to angle left into the West Couloir, but this access to the other route also involves a steep section, although the time you are exposed is much less than in the East Couloir. As the East Couloir gets steep, look to your left for an entrance to the West Couloir perched above a perpendicular wall. You might see some cairns poised on top of this wall. Climb directly up this wall (Class 4) via a steep (straight up) angling traverse on good steps and excellent holds. Exposure is brief but considerable during this move. Turn right and climb up the West Couloir (Class 2 and 3) to where it joins the East Couloir just before you run out of mountain. Some loose material has collected at the top of the couloirs in a somewhat spacious area.

Hang a hard left and climb northwest (Class 3) to the top, which is one of Colorado's most exhillerating summits.

Return the same route, and make every effort to retrace your exact steps! If you think you might go up the East Couloir and descend the West Couloir, see the next section below.

Additional Notes on the Descent and West Couloir

Be sure to note where you enter and exit the East Couloir. Folks often get disoriented and continue climbing down the couloir and miss this vital exit point and get into trouble.

It is also possible to exit the couloir too early. If you do this and end up at a dead end, look around below you for signs of the correct route. Return to the couloir and climb down to the proper exit point.

It's easy to get sidetracked during the descent of this route once you are out of the couloir. Note landmarks, cairns and surroundings on your way up to avoid confusion on your way down. 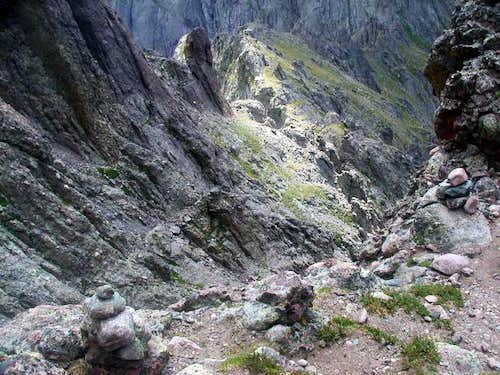 Top of the Wall

Gerry Roach in his guidebook "Colorado's Fourteeners" states there are several places where the West Couloir can be accessed from the East Couloir. This route description only addresses one of those options, and it involves an exposed ascent or descent of a Class 4 rock wall about 40 feet high. A slip off of this solid but exposed route option would result in a disastrous tumble down the east couloir. Do not attempt this option in wet conditions or if you are not experienced in exposed Class 4 scrambling.

Descent of the West Couloir is a simple scrambling matter, mostly Class 2. The couloir is not as steep and therefore has collected more loose rubble, so move with appropriate care while in this couloir. Just remember that the exit involves an exposed down climb of a Class 4 wall into the Eastern Couloir. The climb is short and solid, but exposure is very striking for most folks. If anyone in your group has exposure issues (well, they shouldn't be on the mountain) or are not confident in Class 4 climbing, do not descend the West Couloir.

Be sure to read this report: Crestone Peak and Needle Standard Routes Report

Highly recommend a helmet due to loose rock on almost the entire route.