This scrappy bastion of the Elks carries more signifigence but less notoriety than it's neighbors, the Maroon Bells. Capitol Peak isn't as photogenic or as accessible but among climbers, it is impressively more difficult and deserves the same amount of respect as the Maroon Bells.
At one time, Capitol Peak was once confused and mistaken for Mt. Sopris over near Glenwood Springs and unfortunately, during the golden years of climbing in Colorado, when many of the ranges were being explored and opened up by geological surveying parties and the occasional trailblazer climber, Capitol Peak was largely ignored.

On August 22nd, 1909 Percy Hagerman and Harold Clark (a lawyer from Aspen) made the first recorded ascent of Capitol Peak. They climbed via the northeast ridge which, later on was eventually nicknamed the 'Knife Ridge.' They found this route to be 'immeasurably more intriguing' than most other climbs in the Elks. And that's saying something considering Percy and Harold went on to climb MANY routes and peaks around the Aspen area.
While perched precariously on the knife edge, looking down some 1,900ft below to Capitol Lake, Percy stated,

"Some 2,500ft high from the lake at it's base, it is an exceptionally steep and smooth rock wall.
In some places, the rock actually overhangs and it is doubtful if the peak could ever be climbed from this side."

Twenty eight years later, Carl Blaurock and friends would end up proving this statement wrong. Because of the prohibitively steep granite on virtually every side combined with loose talus in 'all the right places,' the Northeast Ridge remains as the trade route on Capitol.  Likewise, the grand exposure while on the knife portion and that, for most of the ridge, Capitol remains in sight like some huge gray carrot, the Northeast Ridge is notorious among 14er-baggers as being the most difficult, easiest path to any 14er summit. Fortunately, the views are staggering and absolutely delicious!

There are two approaches to Capitol Peak. Both are long (6+ miles), scenic, densly vegetated with ample water available and good camping opportunities.
The Maroon Bells/Snowmass Wilderness Area is without doubt, one of Colorado's gems. Whatever approach route you decide upon (and I've done both), you won't be disappointed. 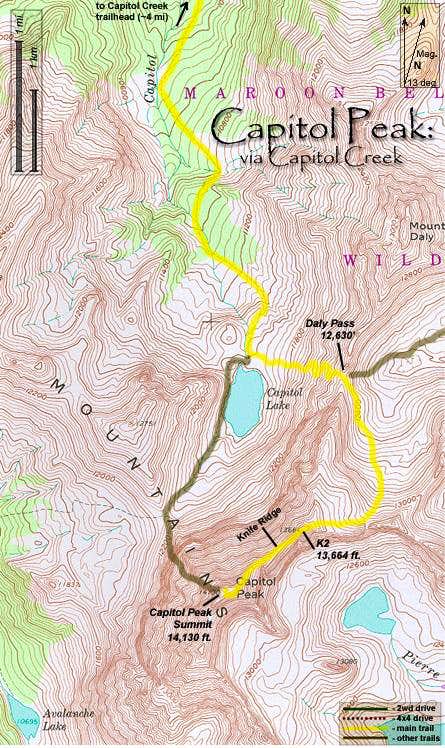 Leave the trailhead (9,450') on an immediate downhill trail. It will weave and switchback down the hillside through scrub brush. Cross the log (single) bridge spanning Capitol Ditch and continue on the good trail to the valley floor. The path will cross the valley floor, across wetlands to another bridge crossing Capitol Creek to a sign indicating direction to Capitol Lake.
The drop to the valley floor from the parking lot is about 400'. Once down, the trail will course due south through evergreen forest, open pasture and meadow for about 6.3 miles to Capitol Lake. The trail will gradually gain elevation. There are good camping spots around Capitol Lake (11,630').
If camping or reaching the lake is not an option, there is a great little meadow about 4.2 miles on the right just across Capitol Creek (at the junction) that would be ideal for camping.

Leave the main trail on a small but good climber's trail straight east towards the Capitol-Daly saddle. This will entail about ~900' of elevation gain to reach the saddle. When wet, this trail can be trecherous.
Once on the saddle, things will get more...'exciting.'

Leave the saddle and start traversing on the east side of the ridge on an apparent trail. The trail will quickly disappear into patches & snippets of trail interspersed with cairns. There will be 2-3 rock gullies that must be climbed through. The first one will require some very careful and tricky maneuvering to get into but the second one is much easier. Keep your progress on a slight descending angle aiming for the large talus below. Roughly half way across the traverse, there should be cairns visable below on the talus. Aim for these.
Follow the cairned path up and to the right to the summit of K2.
Contour and descend K2 towards the northwest on the path of least resistence. You will wrap around K2 basically. Stop at the prominant notch on the other side of K2. This is where the Northeast Ridge begins.

* It is possible to continue climbing along the class-4 ridge from the Capitol-Daly saddle straight to K2 but the climbing is solid 4th class with extreme exposure. The rock quality on this alternative ridge is in my opinion, average. But, if exposure doesn't bother you, it saves you from having to drop and loose elevation.

This is a slight variation in the standard Capitol Creek Trail. It leaves from the same trailhead (9,450') but avoids the 400' drop/elevation loss or reclimb.
Walk to the west end of the parking lot and launch out on a good trail paralleling the ditch. At 1.2 miles, there will be a junction of sorts in the aspen forest (9,500'). Take the marked right-hand fork and continue up into the forest. Eventually, the trail will leave the trees and enter a high meadow. Continue on the traversing trail for roughly 1.4 miles gradually losing elevation. There will be another open field with numerous cattle trails and social trails near the bottom. Hang left (ignoring the other trails) and cross Capitol Creek.
In years past, I've had to take off my shoes/socks and wade across. Follow the standard trail to the lake. There is also good camping at this junction. Follow the details above for Capitol Creek.

This is a great approach if you're wanting solitude and privacy. This is also the de facto approach for winter climbs of Capitol!
Starting at the large trailhead (8,520') near Snowmass Ranch, take the Maroon-Snowmass Trail (southeast end of the parking lot-look for the large placard) for about 1.25 miles. At the junction, take the West Snowmass Trail, crossing the valley floor. The trail will meander up through dense aspen in a narrowing ravine. The valley will open up but the trail will continue to climb steeply. Eventually, the aspens will disappear to be replaced by evergreens and douglas fir. The views of Haystack Mountain are impressive for most of the mid-section of this particular approach.

After crossing through a long meadow, the trail will dogleg south (left) up a densly wooded ravine. Follow the trail as it climbs on the left. This will switchback and meander for a couple miles through patchy forest, talus fields and creek. Cross the creek on a small bridge after ~5.6 miles to the right and follow up into a shallow depression. You will parallel the creek at this point. There is a small meadow hiker's right that is well sheltered with good water access. If camping, use this area as it is better than anything at Moon Lake proper.

The trail will climb up one more grassy embankment (devoid of trees) before reaching Moon lake. Contour around the north side of the lake on a patchy but primitive trail. After the lake, the trail will disappear into occasional cairns. Follow these southwest into the upper basin and eventually higher to the summit of K2. Contour and descend K2 towards the northwest on the path of least resistence. You will wrap around K2 basically. Stop at the prominant notch on the other side of K2. This is where the Northeast Ridge begins. 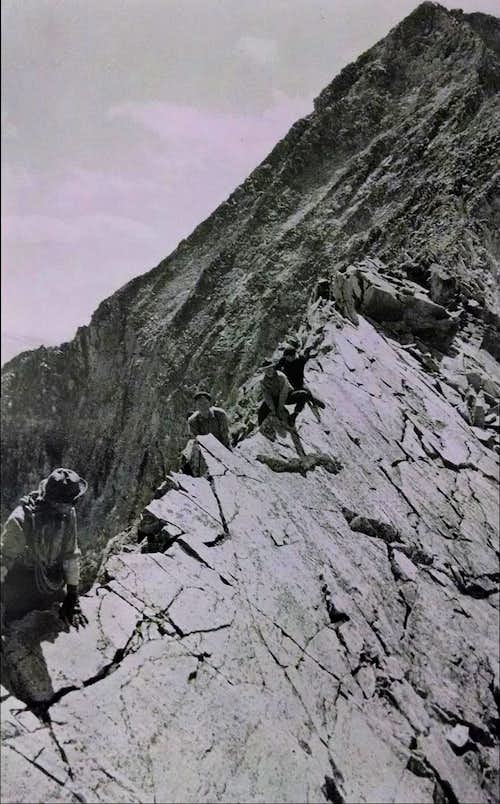 This route entails about 5,300' of elevation gain from the trailhead (Capitol Creek approach).
Once at the small col, make your decision as to whether or not to continue. The ridge and beyond is a bad place to be during bad weather or a bout of indecisiveness.

Leave the col on the SSW side of K2. The climbing starts out as good, moderate class-3 and route finding is very straight-forward. Around 13,600', the Knife Ridge begins (4th class- high exposure). The good thing about the Knife Ridge portion is that the rock is very solid and good. The maneuver that most people use to cross, scooting across straddling the ridge is probably the least efficient & most awkward. It's easier to grab a hold of the crest and walk yourself across on lower lips and edges. This 'knife' section is roughly 130' in length. Don't let the high exposure trick you into thinking that this segment is the hardest. If you can manage the exposure and 'heights factor,' this part is fairly enjoyable. It's the climbing/scrambling after the knife segment that one MUST be diligent & prudent.

Once across the ridge, keep traversing/climbing directly on the ridge crest for perhaps another 250'-300'. Eventually, the standard route will start to contour out on the east face crossing a couple of shallow gullies. This portion is cairned surprisingly well. The climbers path keeps climbing higher as it traverses to an obvious lip. Cross over this lip and follow the cairns to the summit ridge on fairly steep terrain.  The rock quality after you leave the Knife Ridge deteriorates rapidly. The climbing alternates like a pendulum between 3rd and 4th class.  Once back on the ridge crest, the summit is easy pickings on a short 3rd class scramble along the ridge.

A series of small, highly exposed ledges can also be followed that basically traverse under the ridge crest just a bit higher on the east face. The exposure is greater, responsibility is higher (as anything knocked loose will take out lower climbers) but personally, I think the rock is slightly better. But again, this is going to be a judgement call.
Don't confuse this with the Ridge Direct. Sticking to the ridge crest direct from the Knife Ridge is '5-easy' (only 1-2 moves).

Capitol Peak has an exceedingly rewarding summit view. Probably the best in all the Elks.
Reverse your route for the descent.

A question I've run across and have been asked is to: rope or not to rope?
Personally, I say no rope. Unless you're a paid guide (liability issues), a rope is only going to slow you down. The climbing is 4th class scrambling. And to mention, like most other 'big peaks' in the Elks, I don't trust the rock enough to use anything as an anchor. But there are some necessities you'll want along:

Be prepared for changing weather. I've climbed Capitol Peak in August and got caught in a white-out/blizzard near the summit. Amazingly enough, I had heavy gloves. Conditions change...as we all know. This is NOT a mountain to be caught unawares.