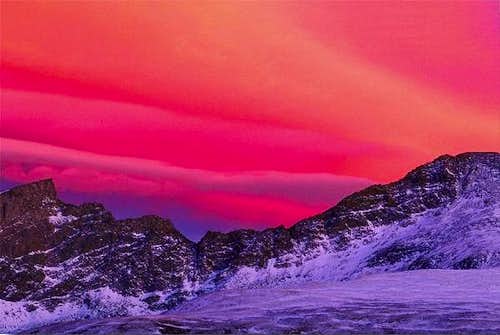 The Sawtooth Ridge at dusk

Among the Front Range climbs and scrambles, the Sawtooth, which connects Mt. Bierstadt and Mt. Evans is a classic. The Sawtooth is most often used as an introductory climb to 3rd class scrambling for beginners. The difficulty never exceeds easy to moderate 3rd class.
The drop off the western sider is quite steep, flirting with near vertical. The eastern side is more manageable and basically open-faced. From the summit of Mt. Bierstadt to "Sawtooth Peak", expect an easy ridge run of roughly .5 to .6 miles.
As an elongated loop, that is ascending Bierstadt, across the Sawtooth to Mt. Evans via its' West Ridge and back to Guanella Pass, the total elevation gain is around 4,675'.
This is the best way of combining both of these Fourteeners.

The main trailhead is at Guanella Pass (11,700'). Drive south for roughly 10.3 miles from Georgetown (on I-70) on Guanella Pass Road (dirt). The road has had significant improvements made to it in recent years and is passable for 2WD vehicles. One can also approach the pass from the south via US 285. At the small town of Grant (Don't blink, you'll miss it!), turn right and drive north for 13.2 miles. Parking is on the east side of the road.

I remember having to walk through the willows fro the parking area en route to the open west slopes of Mt. Bierstadt. In the summer, you'd hope not to get sucked down in the muck and mud. In winter, the post-holing could be nightmarish since the snow doesn't consolidate in the willows. Thanks to the MUCH appreciated efforts and continued works by the CFI, an elevated wooden walkway now exists through the willows. 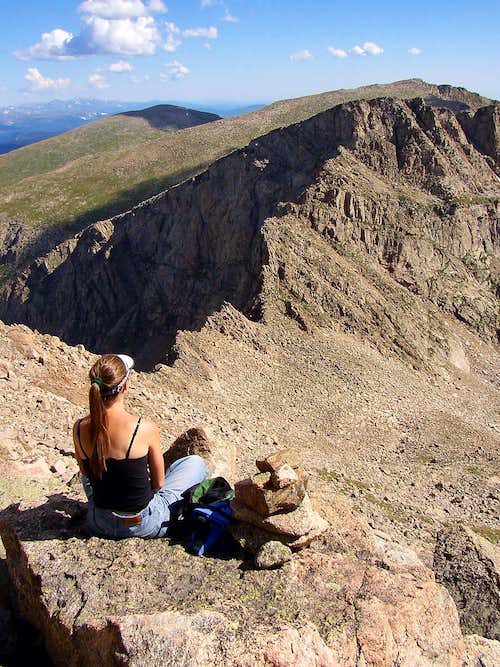 Follow the walkway as it courses through the willows and deposits you onto the grassy tundra. A good, class-1 trail starts almost immediately. After about a mile or so, cross Scott Gomer Creek. The slow ascent now begins. Follow the excellent up as it winds towards the ridgeline. The closer to the ridge you ascend, the trail will start to peter out. Breach the ridgeline near 13,800'. It's an easy class-2 walk to the summit.

* The only other thing I'll mention, is to PLEASE stay on the pre-existing trail. Mt. Bierstadt is one of Colorado's most frequented Fourteeners. People-traffic on this peak is heavy. Resist the urge to shortcut. Others watching will follow suit. Then a whole network of unnecessary social trails will develop. This basically invites erosion in to do its worst. So please...stay the trail!! (Ok. I'm off my soapbox.)

This particular approach is also referred to as the Scott Gomer Creek Trailhead, but most people just refer to it as Abyss Lake.
This CAN be accessed from the I-70 corridor (Georgetown) but it's easier to approach it from the south via US 285 (Grant). Follow the dirt, Guanella Pass Road north out of town for about 5.0 miles. The trailhead is located on the right akin to the Burning Bear Campground at 9,600'.

This is also a good, class-1 trail easy to follow. It gets a bit tricky in spots once in the talus but it is cairned. Follow the trail for 6.4 miles to Abyss Lake (12,650'). Mt. Bierstadt's eastern ridge will be on the left above a massive buttress. Contour around this and keep following the trail to the lake. The east ridge can be climbed and makes for a good, moderate class-3 scramble.
Once at Abyss Lake, stop and take in the views. This is a seldom visited place. It's in stark contrast to the west ridge. Here, you're basically hemmed in by Mt. Bierstadt and the cliffs of Mt. Evans and Epaulet Mountain. It definitely lends a greater appreciation of these two gentle giants.

Continue past the lake on the eastern side. Past the lake, contour to the left up easy talus slopes. Follow a shallow but obvious gully northwest until it doglegs left (west). This occurs around 12,680'. Follow the gully straight to the summit for an easy finish. The scrambling is moderate class-2+. From the summit of Bierstadt, the entire south ridge (Sawtooth) is clearly visible.

Leave the summit of Mt. Bierstadt on good blocky slabs. Staying to the actual ridge crest will yield class-3. Dropping down to a scant climbers trail just below and east of the ridge will lower the difficulties to class-2+. The saddle between "Sawtooth Peak" and Mt. Bierstadt drops to roughly 13,315'; so it's not too bad of a drop. If at anytime the small gendarmes or blocks become too much, it's pretty easy to drop down.
At the saddle, either maintain the crest or trail. Eventually, as you climb higher on the other side of the saddle, you'll reach a point where you must cross.

A large dirt and talus ramp will be visible before you reach it. The entire northern end of the Sawtooth is cairned well. Follow the ramp upwards passing underneath "Sawtooth Peak." It will deposit you onto talus flats and tundra where Mt. Evans can be attained via its west ridge, a gentle stroll north towards Mt. Spaulding and Gray Wolf Mountain or simply descend back down towards Guanella Pass.
Probably the only thing to note along the Sawtooth, is don't cross over too soon. You'll cliff out.

Descent:
It's not necessary to mosey over to Mt. Spaulding (an unranked 13er). Instead, keep descending the west slopes on grassy tundra and talus. The cliffs hikers left will keep you from veering too far left too soon. Once down, the miserable part begins.
It's evitable. Bushwhacking through the willows and marshy basin is the only way back to the trailhead. There IS a little used social trail (human or animal caused- I don't know.) that runs across the marsh. It stays pretty far left and retakes the dry talus somewhat uphill of the actual trail.
I've heard of others keeping to dry ground, hiking along the edge of the willows then crossing over at a constriction but either way, plan on your boots getting wet/muddy.