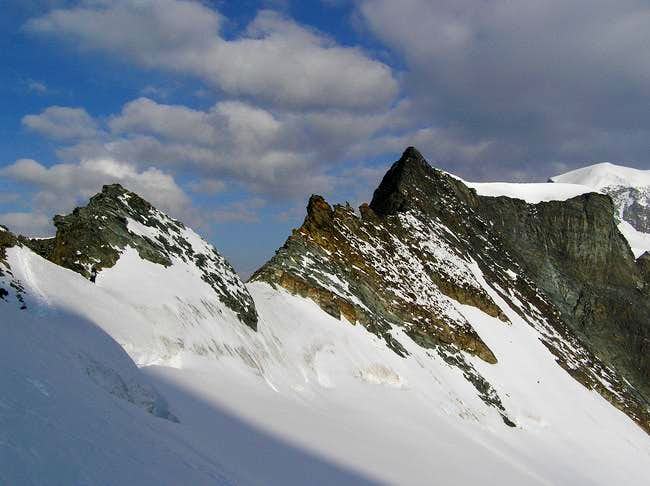 At the very end of the beautiful Saas valley and just above Saas Fee, is the saddle called Feejoch at 3.810m. To the east, the Feejoch is flanked by the Allalinhorn and to the west by the Feechopf (or Feekopf). The meaning of the name means actually “Head of the Fee”.
The Feechopf has not become a significally important summit due to the fact that it is usually only used as a transitpoint by loads of climbers on their way to the Alphubel, which is rather easy accessible from the Feechopf summit.
Nevertheless, the Feechopf is a frequently visited summit. Another advantage, or perhaps disadvantage depending on how you look at it, is that this summit is close to the Alpine underground (!) station called “Mittel Allalin” up on 3.454m. On a good weather day, hurds of “climbers” are climbing the Allalinhorn after a short metro ride from Saas Fee.
Some of them are climbing the ESE-ridge of the Feechopf on continues to the Alphubel summit. However, if taking the metro is not your cup of tea, one way of doing these summits would be using the Längfluhe hut as the startingpoint and traversing the Fee glacier.

Saas Fee can be reached by car or bus from Visp located in the Rhone valley.
Visp is accessible from all directions and offers connections to all major gateways to Switzerland. The Längflue is a three hours walk from Saas Fee. There is also a cable car up to the Längflue hut. Therefore, on a sunny summers day, the sun terrace up at the hut might be rather crowded of tourists enjoying the breathtaking views in the middle of the glacier tongue of the Fee glacier.

The E-ridge (UIAA II) has two major large rocks which can be either climbed or passed (on the south side). There are tracks up on the ridge, however the south side of the ridge is some what exposed. The Feechopf summit turns into a pyramid shaped rock. The rock itself is quite solid if you stay close to the ridge.
From the other side, from the west, the summit is flanked by soft white plains of snow.

The Längflue hut. Here reservation mandatory. Often the hut host is taking the last cabin back to Saas Fee, so don’t be surprised if you are left alone at the hut. However, the hut host Marco leaves you with a well prepared dinner and dessert!
Tel: +41 (0)27-958 21 32

The village of Saas Fee offers around 60 hotels in different categories. I specifically may recommend the hotel Feehof. This cozy hotel offers moderate rates and great hospitality. For camping, there is a nice camping site outside the village of Saas Grund, just below Saas Fee. Camping at Kapellenweg