Fuerteventura is the classic desert island. It is the longest island of Archipelago - 100 km long, less than 30 km wide, and the second largest in size (1660 sq km). It was the first island to be born from volcanic eruptions. The highest point of this island is called Pico de la Zarza (807 m) on the Jandía Peninsula in the southern part of this island. The most mountainous is the central part of this island - so called Betancuria Massif in the vicinity of the town Betancuria. The highest point of this massif is Pico de la Atalaya (762 m). In the northern part, there is a lot of volcanoes - for example San Rafael (117 m), Bayuyo (269 m), Roja (312 m), Escanfraga (531 m) and many others. There are three large areas called malpaís (badlands) - Malpaís de la Arena in the vicinity of La Oliva and Malpaís Chico and Malpaís Grande. The volcanoes are no longer active.

From a morphological stand-point we can divide this island into three different parts: the Betancuria Massif, the Central Valleys and the tableland volcanic formations.

Jandía Peninsula is semi-desert and mountainous southern part of Fuerteventura. Fuerteventura was once split into two islands and Jandía Massif was born first from series of eruptions, some 17 million years ago. This island was then linked to the rest of Fuerteventura by a more recent isthmus.
Mountains in this area, called Jandía Massif, are divided by deep valleys called barrancos. Jandía Massif consists of barren mountains, covered only by thorny scrubs and thistles called Cardón canario. You have no chance to hide here from the sun, but on the other hand, you have a great chance to meet here the most famous animals on this island - goats. 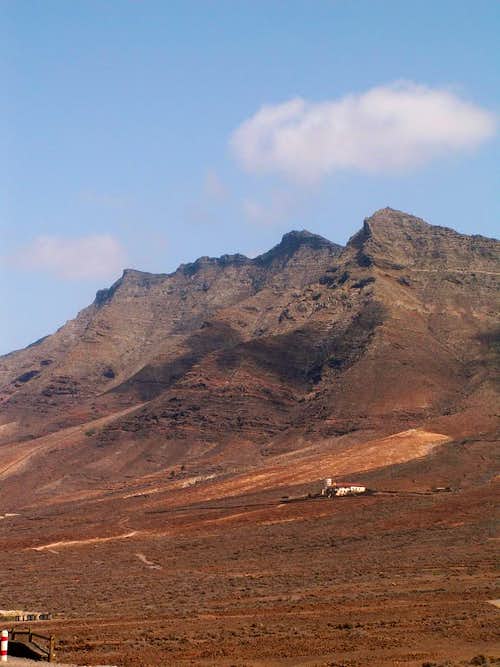 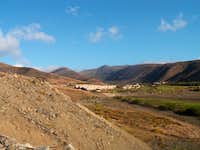 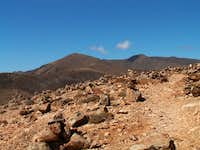 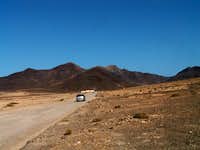 The highest mountain of this massif has a great biological significance due to the presence of many endemic organisms. The top of this mountain is surrounded by fence. The walk from Morro Jable and back takes approximately 5 hours (15 km). To the top leads long and open crest. Due to its height, is the top of this mountain often hidden in the clouds, going from the west. From the south side it has moderate slopes, but to the north Pico de la Zarza falls with steep slopes to Playa Cofete area. 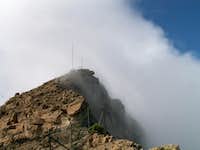 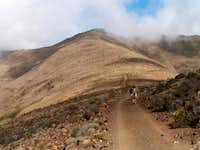 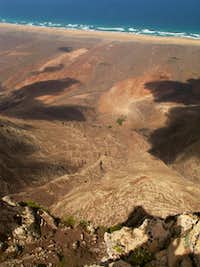 The Betancuria Massif is located in the west of Fuerteventura. This is the most mountainous area of the island and the largest area of basement complex rocks of the Canary Islands.

Above Betancuria, there is a restaurant and great look-out point on the top of Tegú (645 m). It is the Mirador de Morro Veloso, accessible by car. Another good look-out point is at Degollada de los Granadillos saddle, from where you can see Embalse de las Penitas reservoir (it is often dry).

The climate of the Betancuria Massif has more favorable humid conditions than the rest of the island.

Massif covering an area of 1266 hectares which is protected since 1994. The area contains steeply sloping mountainsides with the highest point at 690 m.

Tindaya - originating from basal complex of Betancuria Massif was once regarded by Guanches as a sacred place and thus it was the place of sacrificies. We can find here a lot of inscriptions and aborigine rock carvings, known as podomorphs, which were discovered in 1978.

The most noticeable mountains in this massif: 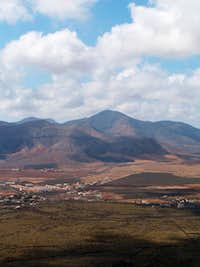 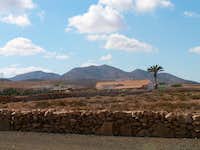 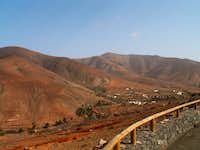 Volcanic period in this island can be divided into two groups:

1) Volcanic Cycles - 17 to 12 million years ago. During this period, fissural basaltic eruptions took place, which formed large tabular structures. Those structures were formed by the pilling up of thousands of lava flows. Those formations are still the highest volcanic structures on the island - for example Jandía peninsula. After a long dormant period, volcanic activity resumed 5 millions years ago and continues to modern times (Pleistocene). This series affected wider area - north and the center of the island and produced formations with a much smoother morphology.

The most noticeable mountains in this massif: 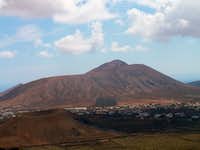 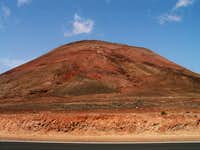 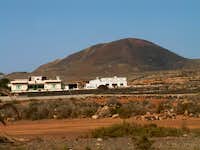 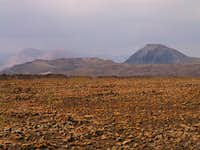 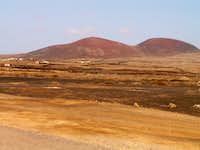