Gimpel
Tirol - where the Anton comes from, Austria, Europe

Tirol - where the Anton comes from, Austria, Europe

Gimpel is not the highest but the most well-known and boldest looking summit of Tannheimer Berge, this easternmost subrange of Allgäu Alps. Its south, west and north faces with many subridges and arêtes host many famous and well-known climbing routes, about 20 climbing routes on the south and west side (about 200 to 300 meters of altitude difference), 4 routes through the north face (600 meters of altitude difference); many of them are "historic" routes. Thus Gimpel is a real classic mountain.

To the north Gimpel has a near perpendicular huge rock face, dominating the end of Raintal valley. Gelbe Scharte separates Gimpel from Rote Flüh, the western neighbour summit. The west face is a steep rock face which gives Gimpel a spire-like appearance. When viewed from the south, a broad southern rock face rises 200 to 300 meters above the meadows and wood slopes of Tannheim valley.

As the snow does not linger long on the south side of Gimpel, the southern climbing routes are a good option for early or late in the year climbs. To the east there is a long arête connecting Gimpel with Zwerchwand and Köllenspitze (also called Kellespitze or, less attracive, Metzenarsch (the whore´s ass)), the highest peak of Tannheim mountains. Within this arête there is “Gimpelvorbau” another famous climbers aim.

User Lampi, the first author of this page, states, that Gimpel looks like an ant- stack on nice summer days??? I don´t know. The denomination Gimpel does not derive neither from an ant nor from the bullfinch. It is named after the hollow south of the summit which was named “Comba” in Celtic times. Local idiom changed Comba to Gimpel.

The normal route to Gimpel uses a system of easy chutes, rock, meadow and scree ledges which start on the south side of the mountain and goes diagonally up to the ridge between Gimpel and Gimpelvorbau. The crux of this normal route, which is marked with red dots and some yellow triangles, is a 5 to 10 meter traverse in steep rock with some UIAA grade II moves.

Gimpel summit offers great views and on nearly all routes much climbing pleasure. The southern routes are by far the favourite routes so expect traffic jams on days with good weather. For the experienced hikers and mountaineers: do the normal route early in the morning, its just great to sit alone on this bold mountain top. 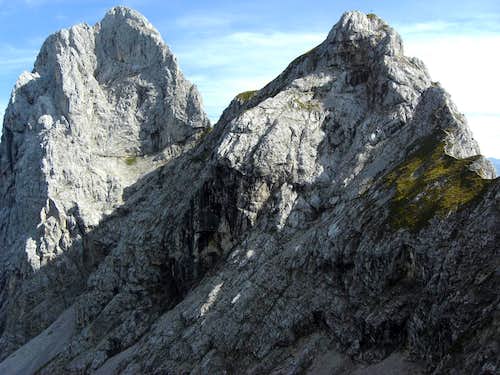 Gimpel and Rote Flüh (right) as seen from Schartschrofen (September 2012)


By train and bus:
Railway stations near trailheads are: Musau and Vils.

Every trailhead has its bus station. See the schedule for bus line 4262 here . 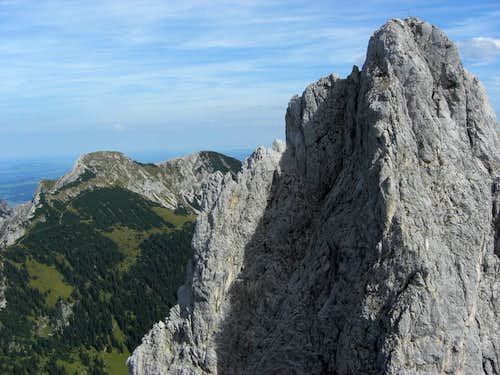 Gimpel normal route:
Starting at the southeast pillar of Gimpel south face the normal route uses a system of oblique running chutes and broad meadow ledges up to the east ridge and the upper east ridge to the summit. In parts UIAA grade I, some moves grade II, the rest is steep and exposed hiking terrain.

Trail to routes:
Starting at the hut descend on forest road tot he first switchback. Leave the road to your right, traverse the wood tot he scree field below the rock face. Ascend the scree to the starting points of the routes.

Best base camp and information about rock condition: Gimpelhaus or Tannheimer Hütte

Trailheads: all trailheads within Tannheim valley

From Gimpelhaus follow trail number 415 in the direction to Rote Flüh. From Tannheimer Hütte do the same on trail number 417. Both trail meet in the Gimpel sink. From there follow trail 417 in the direction of Judenscharte, the col between Gimpel and Rote Flüh. There is a lower and an upper trail to the col. For the climbing routes take the upper trail near the bottom of the south face to your route starting points. 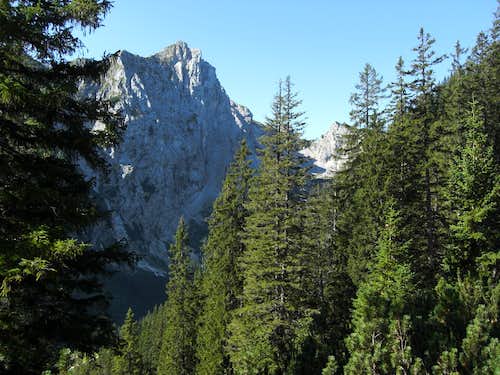 Red Tape
No restrictions as far as I know. 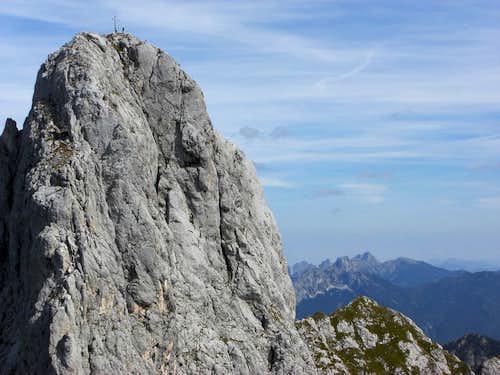 Gimpel for experienced hikers on the normal route is a late spring, summer and autumn summit, depending on the snow conditions.

You need a helmet for Gimpel normal route as there is frequent rockfall near the south faces of Tannheim mountains. Yor need to master UIAA grade II in exposed terrain.

All other routes are for the experienced climbers. Most routes have fixed pegs. Take nuts and friends with you. Rope / double rope with 50 meters, helmet, slings, quickdraws, screwgate carabiners and a figure eight descender, in case you don´t use the normal route as descent, are recommended. 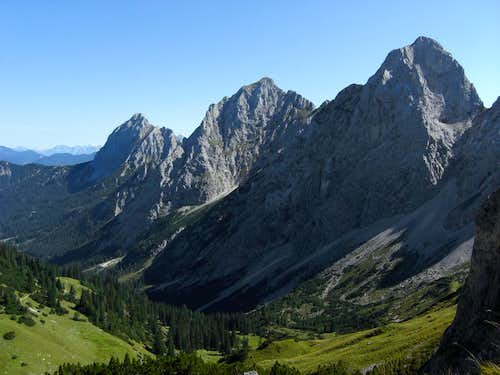 The climbers guides of Toni Freudig can be ordered here via Internet .