Goodale Mountain is an outrider of the Sierra Nevada - that is, it is one of those large, bulky mountains that sits a few miles east of the SIerra crest. From the west it appears to be a lesser peak, just a crown of class-3 summit rocks perched atop a long ridge composed of metamorphic rubble. From all other sides, it's immense bulk is readily apparent.

Though the west side and NNW ridge are composed of dark red and black metamorphic rock, the mountain for the most part is composed of light-colored granitic rock. On the east flank of the mountain there are signs of fairly recent volcanic activity; several cinder cones lie right at the foot of the mountain, and there are several locations where the white granitic sand of the Owens Valley has been covered with black and red cinders. 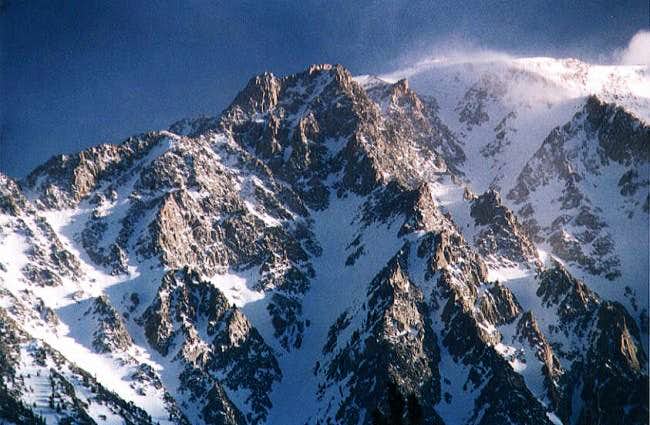 The northeast face of Goodale Peak in winter.

The easiest approaches are from the east, on the floor of the Owens Valley. From Highway US-395 between the towns of Independence and Big Pine, go west on the Taboose Creek Road.

The easiest route (the West Face) requires an approach up the arduous Taboose Pass Trail. Continue up the Taboose Creek Road, following signs to the Taboose Pass Trailhead. Hike up the trail to about the 10,200' level, to an area of small tarns with some fair campsites. The canyon splits here - take the left branch and climb class-3 ledges near a waterfall. Above the fall is a small lake basin, and the west face of the peak is on the left.

The much harder, off-trail route leading directly up the east face is accessed by following the Taboose Creek Road to it's split with the Goodale Creek Road. Go left on the Goodale road and follow to it's end at the Goodale Creek Trailhead. There isn't a trail here, so 'trailhead' is a misnomer. To climb the east face, start anywhere along this flank. I recommend starting directly from the road-end, as this is the highest point and will save some slogging.

For day hikes, no permit required. For overnight stays, obtain a free wilderness permit at either the White Mountain Ranger Station in Bishop or the Mount Whitney Ranger Station in Lone Pine. Permits may be reserved in advance for $5 per person.

Best season is mid-July through late October. February through May this peak would yield some good ski runs.

For the west face route, fair camping at the canyon split below Taboose Pass, and pretty but exposed camping near the lake beneath the west face.

For the east face route, fair to good camping (car-accessible) can be had near the cinder cones at the base. There are some excellent campsites on a large bench halfway up the east face, but no water available here.

The Climber's Guide to the High Sierra (Steve Roper) - P 253