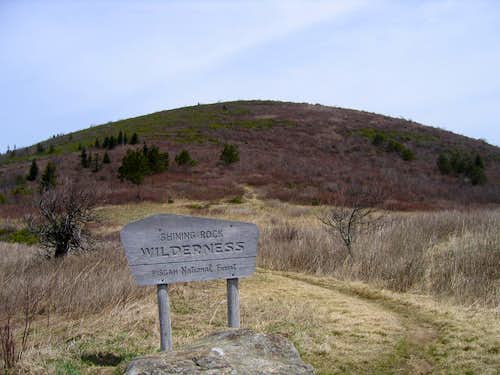 Grassy Cove Top is one of a number of 6,000+ ft. heath balds in the southern Appalachians. The summit is a mixed grass and heath bald. If planning a trip to this sixer, do not confuse the unnamed subpeak (exactly 6,000 ft.) located 0.3 miles north with the Grassy Cove Top. Grassy Cove Top is the first mountain you come to heading north from Investor Gap. There are great views of the mountain from Investor Gap. The summit trail spur from the Art Loeb trail is lined with unforgiving backberry thickets. The overgrown blackberry bushes along the summit spur are a testement to the fact that Grassy Cove Top is usually bypassed by hikers on their way to Shining Rock, Cold Mountain or East Fork. This pesky foliage wreaks havoc on exposed skin so long sleeves and pants are recommended. The views from the lone summit boulder which marks the highpoint(despite the fact that there is no USGS marker) are spectacular. On a Clear day, one has an exceptional 360 degree views of Mt. Pisgah, Shining Rock, Tennent Mountain, Clingman's Peak, Mt. Lyn Lowery, Mt. Mitchell, the Plott Balsams, Richland Balsam and the the Smoky Mountains of east Tennessee. There are no bouldering opportunities on Grassy Cove Top, however, if bouldering is your thing there are some excellent quartz rocks on Shining Rock that offer a unique bouldering experience. Shining Rock is just a short distance away. It can be recognized by the quartz outcroppings that shroud the summit. Grassy Cove Top is one of the official Southern Sixers recognized by the North Carolina Mountain Club. The mountain is located just off of the Blue Ridge Parkway in the Shining Rock Wilderness (USGS quadrangle: Shining Rock, NC).

The most popular way to access Grassy Cove Top is via the Blue Ridge Parkway. To reach this section of the Parkway: - From I-40 exit on to U.S. 23 - Follow US 23 (also known as the Great Smoky Mountains Expressway)through Waynesville until you reach Balsam Gap (about 8 miles). - At Balsam Gap (mi. 443.1) turn onto the Blue Ridge Parkway - Go north toward Asheville - At mile 420.2 trn onto F.R. 816. - Park at the Black Balsam Knob Trailhead if you wish to summit Black Balsam Knob & Tennent Mountain in the same trip. - If you wish to bypass Black Balsam Knob & Tennent Mountain, park at the very end of the road by the Sams Knob trailhead. 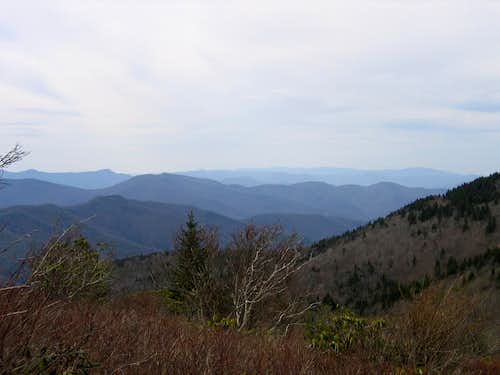 There is no registration or fee requirements to access Grassy Cove Top. There are no restrictions on dogs, however they should be restrained in the parking areas and around trailheads.

There are myriad backcountry camping options in both the Pisgah National Forest & the Shining Rock Wilderness. The best places to camp when visiting Grassy Cove Top are: 1. Investor Gap (an extremely popular camping destination in the spring & summer so get there early!) 2. If you are looking for isolation and don't mind the wind, there are a couple of nice flat grassy areas on the summit of Grassy Cove Top. If you choose to camp on the summit practice sound outdoor ethics>>that is low impact, LEAVE NO TRACE. 3. If you are attempting to summit Grassy Cove Top from East Fork there are several campsites available on a first come basis at the trailhead.

What's in a Name?

Grassy Cove Top was originally called Father Oldfield Mountain. It was named by famed geographer Arnold Guyot. For unknown reasons however the the complicated name did not stick. The cove located to the south of Grassy Cove Top is traditionally "Greasy Cove." Some locals maintain that the "Grassy" in Grassy Cove Top is a corruption of the vernacular "Greasy" (or the other way around). A bit less confusing is the fact that Grassy Cove Top which is primarily a heath bald looks grassy from a distance. However once you begin your sojourn to the summit you immediately find out that the "grassyness" of Grassy Cove Top was all just an illusion. Waht do you think?