Roan High Knob is the pinnacle of the Roan-Unaka Mountain Range, a rolling expanse of highlands in northwest Tennessee. It is also the highest peak between the Black Mountains and New Hampshire's Presidential Range. Rising some 6,286 feet, its true summit sits atop a modest rock outcropping some 30 meters from the Roan High Knob shelter, the highest shelter on the 2,160 mile Appalachian Trail.

Roan High Knob is cloaked in dark stands of spruce and fraser fir. The ecosystem in this area is unique, more closely resembling the woods of southeast Canada. Rising winter temperatures, acid rain and invasive new insect species threaten evergreen growth and some of the proud fir trees are slowly dying.

Though dense forest and frequent fog hide summit views this should not dissuade visitors from exploring the Knob. Its haunting moss-clad forests and ancient rock speak to the timelessness of high Appalachia.

On a clear day, nearby Roan High Bluff, Round Bald and Grassy Ridge Bald offer some of the finest vistas east of the Rocky Mountains. 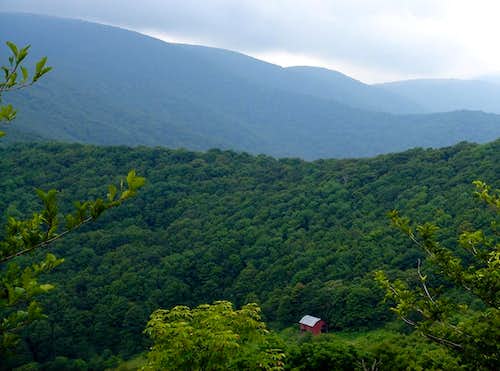 From the town of Roan Mountain, Tennessee take TN 143 past Roan Mountain State Park up to Carvers Gap. From Carvers Gap, take the Appalachian Trail south 1.5 miles to the junction for the Roan High Knob Shelter. Follow the trail to the shelter & on to the summit on the outcropping beyond the shelter.

No parking permits, use fees or summit fees are necessary unless you pass through Tollhouse Gap and park near the old Cloudland Hotel site. Parking fees here range from $3 to $5 during normal business hours. The road to Carvers Gap may be closed in the winter due to icy conditions.

The best time to climb Roan High Knob is either in the Fall or Spring time. The rhododendrons that blanket the mountain blume in late May to mid to late June. This spectacular floral display is worth seeing. Summer can bring hot & humid conditions along with swarms of pesky insects to the region. Winter is nice because of the solitude it brings to the Roan. Heavy snows can close access to this area during the winter months. I have actually used snowshoes on Roan Mountain as late as March.

There is pay camping at Roan Mountain State Park at the base of the mountain (Tennessee side).
The A.T. shelter at Roan High Knob is also a possible camping destination (check on availablity).

Bear bags a must in this area. Make sure all food and/or scented items are properly hung at night. 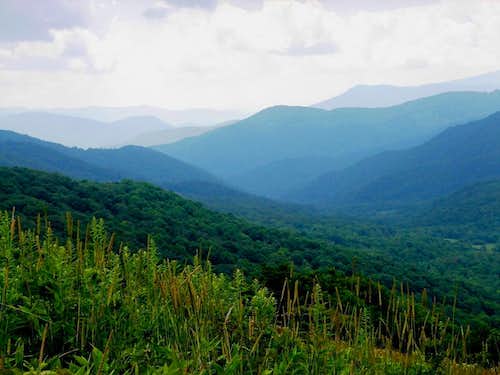 The Naming of Roan

Although the origin of the name of Roan High Knob is hazy, locals indentify a few possible explanations for its inception. Some locals suggest that there are stories the "old-timers" told of Daniel Boone making frequent visits to the mountain on his "roan" or "red-colored" horse. In the fall the ash berries that grow on the mountain cause a "roan" color that some feel inspired the name. Ron Tagliapietra suggests that the name possibly comes from the rhododendrons that blanket the mountain and turn the hillsides a reddish color in the spring. Finally, there is the argument that French farmer Andre Michaux, who came to the young United States in 1785, named the mountain after the Rhone River in France. Whatever the case, Roan High Knob is a unique place to experience the slowly disappearing backcountry of the eastern United States. 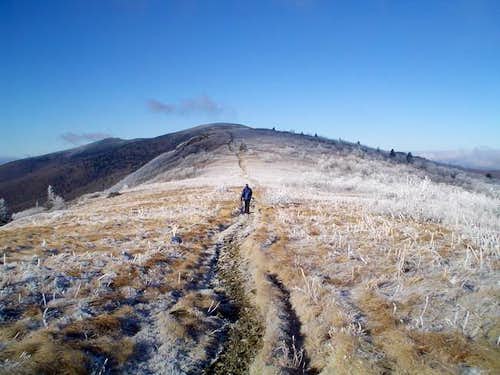 During the ice age, about 20,000 years ago, spruces and firs dominated the Southern Appalachian forest. Then as the climate warmed, the spruce-fir forests gradually retreated north to Canada, eventually remaining only on the tops of the highest southern mountains, such as the Roan. Along with the red spruce and Fraser fir, other unusual plants and animals were isolated in cool, Canada-like climate above 5,000 feet.

Roan Mountain’s forests were logged in the 1920’s and 1930’s. According to a local logger, all merchantable timber was cut by 1939. In 1941, Roan Mountain became part of the Pisgah and Cherokee National Forests and the forest returned. In the 1950’s a tiny insect, the balsam wooly
adelgid, first appeared in the Southern Appalachians. The adelgid feeds on Fraser firs and eventually kills any fir that is large enough to have
bark crevices. The insect doesn’t affect the young trees, so thousands of fir seedlings often form a thick “carpet” of trees under dying firs.

Special Thanks to the USDA Forest Service.

The first human visitors to Roan Mountain were Indians, who lived at the base of the mountain and traveled across its gaps. The first people to study the mountain were botanists, such as Andre’ Michaux, John Fraser, and Asa Gray. They described rare plant communities and discovered
scores of “new” plants, including Fraser fir, Catawba rhododendron, and Grays lily. Around 1870, General John T. Wilder bought 7,000 acres along the top and sides of Roan Mountain. It was Wilder who built the road to Carver's Gap. He also constructed a 20-room log inn near the
summit of Roan High Knob in 1877, then replaced it with the luxurious Cloudland Hotel. For about 20 years guests enjoyed the “pure air, the delightful temperature, the clear, cold spring water, and the
perfume-laden woodlands.” Today little evidence remains of the once grand hotel.

On a side note, though the air is still refreshing much of the year, airborne pollutants from the valleys of Tennessee and North Carolina can be hazardous to hikers along the Roan High Ridge in the hottest days of summer. A thick brown haze may settle in that more closely resembles the foul air around central Los Angeles. A special thanks to the Ohio Valley industrial plants. 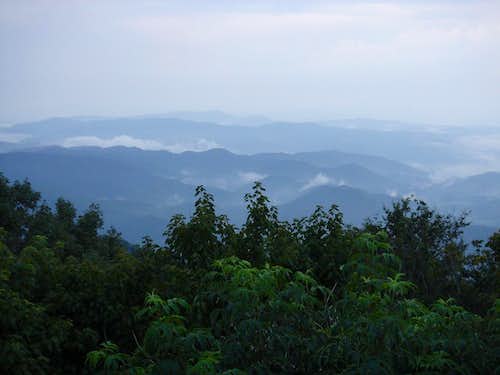 I don't think camping is allowed on the summit ridge but I'm not sure. There is evidence of camping when the AT makes the ridge from Hughs Gap