The Southern Sixers are not a single compact range and most are not even associated ranges, save for the fact that they are contained in an area bordered by Tennessee on the west and North Carolina on the east.

The Appalachian highlands have only a small area that can be defined as a true high country. These habitats are very fragile and very precious and have been under constant pressure since the 1800s. They are islands of special interest biologically and botanically, rising as they do to heights nearing 6,700 feet from a plateau of as low as 1200 feet. The upper elevations remain the last bastion of Canadian types of vegetation, animal life, and weather in the South. To appreciate the fragility of the Earth’s ecosystem, one can look upon the Southern Sixers as a prime example of the threats facing not just these unique peaks, but also the planet as a whole. 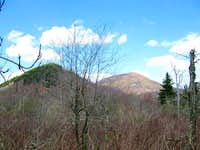 The Southern Sixers historically are home to vast tracts of balsam and spruce forests and their accompanying ecosystems. However, most of these forests were leveled to the bare ground up until the early 1900s, (with just a few exceptions), in massive timbering operations facilitated by logging roads and narrow-gauge railroads that found their ways into the deepest coves and onto the very highest peaks. Since that time, many of these forests had a chance to recover, but the twin effects of acid rain and the introduction of the foreign pest, the Balsam wooly adelgid, decimated the balsam trees again. Only now have the balsam forests begun to recover once more, and time will tell if the adelgid threat is over.

There are, appropriately, six ranges in the South that are home to our 6,000-foot peaks.

First and foremost are the Black Mountains of North Carolina. This range contains, among others, the two highest peaks in the eastern United States—Mount Mitchell and Mount Craig. One of the finest and most challenging hiking trails in the eastern USA is on this range—the Black Mountain Crest Trail, administered by the National Forest Service and Mount Mitchell State Park. The Black Mountains should not be underestimated for extremes in topography and in weather. Winter can slam these high elevations with near-Arctic conditions during any autumn or winter month. Also, the bear population density is as fine here as anywhere in the South, rivaling the number of bears per square mile to be found in areas such as the GSMNP, the Nantahalas, or Rich Mountain Wilderness in Georgia.

The second highest of the eastern ranges is the more famous Great Smoky Mountains. This range is largely protected in one of the East’s finest national parks (named for the range). In the 1930s, both the Black Mountains and the Great Smoky Mountains were being considered for National Park status, and the Smokies won out. The Smokies contain some of the very highest peaks in the East, including Clingmans Dome, Mount Guyot, and Mount LeConte. In fact, Mount LeConte is likely the only peak in the eastern USA that has a vertical climb of more than one mile from base to summit. There, one can begin a hike at 1,200 feet elevation and end up on the summit of LeConte at 6,593 feet above sea level.

For a wonderful experience in the changes occurring at various elevations, this is a great hike that allows one to begin in a typical southern habitat, climb into enormous cove hardwood forests, and end up in the Canadian Zone dominated by spruce, balsam, and beech. The Great Smoky Mountains contain important virgin forests and are considered an International Biosphere Preserve. However, the park is bisected by a motor road along which millions of motorists travel each year; and the borders of the park are under intense pressure from commercial development that mars the wilderness aspects of the entire region. In addition, the park’s ecosystem is also under assault by a number of introduced insect pests and by the constant inundation of air pollution from the heavily populated and industrialized Ohio Valley region. 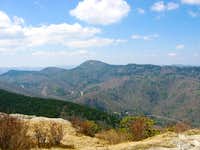 Third in rank of highest peaks are the Great Balsams, which culminate in Richland Balsam, which reaches the highest elevations in the Pisgah National Forest (at 6,410 feet). Some of the Great Balsams are protected within the confines of the Middle Prong Wilderness and the Shining Rock Wilderness. Other parts of the Great Balsams are at least nominally protected within the National Forest borders. This range has eleven of the forty or so recognized peaks defined as the Southern Sixers, putting it just behind the Great Smokies, which has twelve, but ahead of the Blacks (which has ten).

These peaks do overlook some vast swathes of forested wilderness. But the Blue Ridge Parkway and NC 215 cut the heart of this region, marring an otherwise tremendous wilderness experience. However, these roads do allow convenient access to trailheads that will take you to these high peaks—a tradeoff some find pleasing. These peaks provide some of the best treeless summits in the East, and wonderful examples of the beech forest ecosystems in the gaps between the fir-dominated ridges. These lands are also great bear habitat and the bruin populations are impressive. One of the hardest to reach of the Southern Sixers is in this range—Cold Mountain, made famous by the Charles Frazier book and movie of the same name. 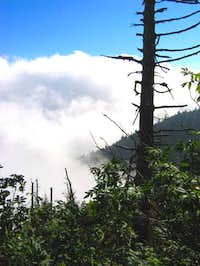 Closer to the Great Smoky Mountains, the Plott Balsams contain a few 6,000-foot peaks. The highest of these summits is Waterrock Knob, at 6,292 feet. Again the Blue Ridge Parkway allows very easy access to these high peaks, for better or worse, depending on your view of the wilderness experience and the need to find isolation. These mountains contain some extremely rugged terrain with enormous vistas and plunging gorges and coves cut by clear, free-running streams and cataracts that provide a home to native brook trout.

Next in height is the area known as the Roan Highlands. This compact range contains its namesake Roan Mountain, Roan High Bluff, and Grassy Ridge Bald. The Appalachian Trail is situated along this very high ridgeline and these are the northernmost of the Southern Sixers. 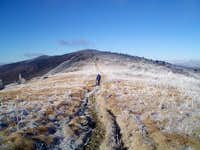 After these, heading north, the AT does not again find itself routed over as high terrain until it encounters the Presidential Range in New Hampshire. The Roans are distinctive rounded peaks with vast areas of open grasslands, or balds (as they are named). These peaks are also quite famous for their enormous wild rhododendron gardens. In July they are ablaze with the blossoms of these shrubs, arguably the most beautiful flowers native to the Southern Sixers.

In years past, there was a popular hotel (The Cloudland) located near the summit of Roan Mountain, but it fell into ruin and was finally consumed by fire. Little remains of this structure save for evidence of its foundations, which can be found by the curious hiker with knowledge of its former location. Today, the Roan Highlands are largely protected but heavily visited.

Depending on your definition of ranges, the smallest number of Southern Sixers contained within any of the ranges are the Craggy Mountains. This range has one of the Southern Sixers—Craggy Dome. However, some people consider the Craggy/Black ranges to be one and the same. Indeed, they lie in very close proximity and are often listed just so: Blacks & Craggies. While Craggy Dome is the highest of the peaks in that range, it is by no means the most impressive. Several nearby mountains provide enormous rocky faces, treeless summits with 360-degree views, and much finer vistas. 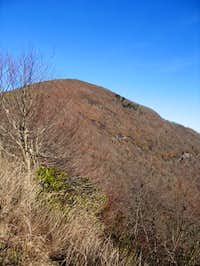 There's an open and healthy debate over how many "Southern Sixers" there really are. The Carolina Mountain Club is largely considered to have established an official (if not completely definitive) list for those wishing to peakbag them and claim membership in the club of those who have summitted them all (the South Beyond 6000).

The official list consists of 40 named peaks (with one being under debate as questionable), being: 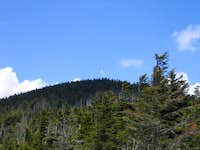 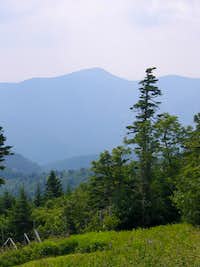 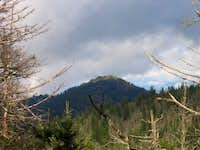 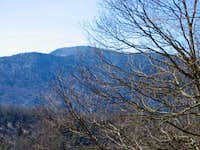 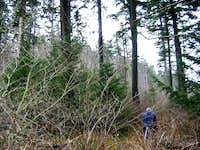 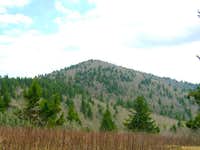 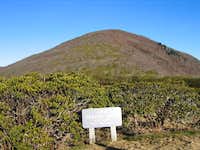 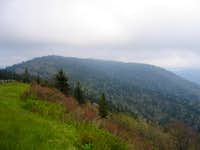 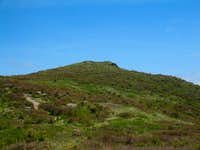 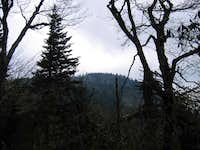 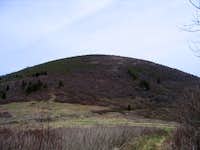 There are unofficially sixty peaks in the southeast that crack the 6,000-foot barrier. Some are said to be too close to other named peaks for consideration for the official list, or in the case of a peak such as Clingman's Peak, are off limits due to private property issues. In the case of Clingman's Peak, it rivals Mount Gibbes but has a radio tower and fence which prevents it from being officially bagged. I don't know why peaks such as Mount Yonaguska and Mount Hardison are not on the official list.

There are many camping opportunities through the NC/TN highlands where the Southern Sixers are located. Depending on the level of development required, there are many choices to be made. Some of the state parks near certain sixer peaks have RV sites with full hookups. Other campgrounds in National Forests and National Parks have semi-developed sites with potable water, tent pads, toilets, but lacking such luxuries as hot showers. The Great Smoky Mountains National Park is notable for not having hookups for trailers and RVs and having no showers or hot water.

Re: A Small Quibble

Yep. You're right. And Cortez did a post for Lyn Lowry. (Personally, I hate the name change and the hideous metal cross erected on the summit, but I'll fix the post and make a link to the page for Lyn Lowry.)

Enjoyed the write up. You have a paragraph that questions why some peaks are included on this list, but not others. My understanding is it all comes down to prominence. To be included on this list the peak must hold 120 feet of prominence, and more specifically "clean" prominence. The other peaks you've mentioned such as Clingman's Peak (40 feet) and Mount Hardison (94 feet) just don't hold enough prominence to qualify. Interesting, for most Appalachian peak lists 160 feet is typically required to qualify as being it's "own" peak. If this requirement was held there would only be 35 peaks on this list. One more item. I consider Peakbagger.com to be a leader on maintaining these types of lists and calculating prominence of different peaks. Sometime since 2018 they updated there information and now Mount Yonaguska holds more than 120 feet of prominence and Tricorner Knob now holds less than 120 feet. This means Yonaguska is now on the list and Tricorner is not if this is the "rule" you're going by. Peakbagger lists it as Yonaguska OR Tricorner (but only Yonaguska is marked on the list's map). In the end you get to define your lists how you would like, but I believe this is the most accepted reasons for the 40 peaks included on this list.