The easternmost of the trinity including Mt. Hamilton and Table Mountain, Greenleaf's Red Bluffs look out over the jumbled landscape resulting from the catastrophic collapse of its southeast side perhaps 500 years ago. (Though there is some evidence that it occured Jan. 26th, 1700.) Geologists say that this collapse, which also included the southeast side of adjacent Table Mountain, dammed up the entire Columbia River for about two years and was the origin of the Native American's legend of the Bridge of the Gods. Today, the towering bluffs southeast of the main summit are unique in all the gorge presenting the largest viewable section of the Eagle Creek formation. This interesting stratum is the remains of the many landslides, volcanic mudflows, ash falls and alluvial deposits that occurred during the creation of the Cascade mountain range. Like most of the Gorge peaks, Greanleaf's summit view takes in St. Helens, Rainier, Adams, Hood and Jefferson. 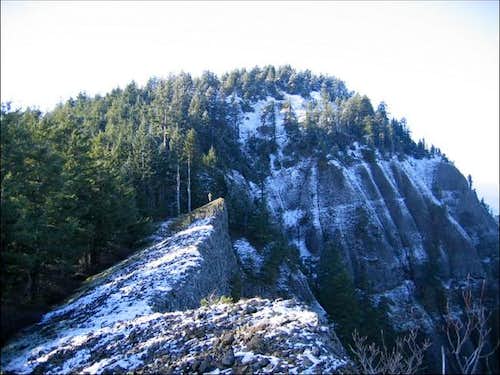 For more info on the ancient landslide, take a look at this article: Link

The main summit once sported a fire lookout cabin perched on a hand built rock foundation. A small structure likely related to the lookout still stands a few dozen feet northwest of the summit but looks about to completely collapse. (Update: Most of this structure finally collapsed during the winter of 07/08.) The main lookout is still up there in its entirety, but in a flattened heap pushed off the northeast side of the summit slope.

The bushwhack down the southeast ridge is in classic NW style but thankfully lacks the Poison Oak so popular at lower elevations and also the Devils Club, frequently present in wetter locations. There are only a couple of spots where it is really difficult and you will thank yourself for making the effort as you emerge onto the bluffs facing the northeast and especially the final cliff face at the far southeast of the ridge. Careful of that final cliff face - the high point of it is undercut and looks very unstable. (Update, March 2008: Read below section on Late 2007 landslide - don't go anywhere near the edge of the bluffs!!)

An interesting side trip can be made into the Greenleaf Basin that occupies the valley between Greenleaf Peak and Table Mountain to the SW. An impressive area of old-growth cedar remains at the lower end of the valley and remains of some of the logging equipment lost in the fire of 1929 can still be found along the old railroad grades. The tracks have long since been removed and salvaged but an occasional spike and even some rail can be spotted along with steam donkey engine remains and many cables and old equipment. Access the valley by backtracking to the five-way junction (you will know it when you see it!) and proceed SE on CG 2020 to the powerline road. Enter the forest past a berm and follow this old railroad grade/logging road to its end and you will find the cedar groves. Many more groves are scattered throughout the basin. See the map for the alignment of the old railroad lines. Update, late summer, 2008: The DNR (Dept. of Nat. Resources) decided to "abandon" the old RR grade/logging road down into the basin and it is now a mine field of piles of dirt/rocks and large trees pulled across the route. The old grade can still be followed though not as easily as in the past.

From Washington state route 14, 1.5 miles east of the Bridge of the Gods, turn north about 100 feet past MP 43 and the road to Skamania Lodge. Turn left again in .32 miles. (Don't turn on the lodge entrance road but on SW Foster Creek Road, about 100 feet past the lodge driveway) After another .7 miles go uphill onto Ryan Allen Road. In a short distance, turn left onto Red Bluff Road. Follow Red Bluff .7 miles and turn left at the junction with CG2020. Stay on this gravel road for 3.1 miles. This is a very rough road but can be done in a two wheel drive car. As you are about to cross under the power lines for the fifth time, park, and take the powerline road up the hill. An alternative would be to drive a short distance up the powerline road for a few more secluded and possibly safer parking spots. The road turns very rugged and views of the northeast facing cliffs of Greenleaf Peak are off to the left. After 1.57 miles up these switchbacks, at the obvious saddle, take the very faint trail off into the woods on the left. I placed a large rock there to mark the trail on 10/22/04 and over the past three and a half years other hikers have added to it and it's becoming a decent sized cairn marking the trial. The trail soon improves as you progress up the hill.

From the Oregon side, take the Cascade Locks exit from either direction off I-84, cross the bridge, ($1.00 toll) and proceed as above.

The power line road is impassable for anything less than a high clearance 4WD with an experienced driver up the talus switchbacks. The main gravel road is passable beyond this point, (with a couple of really difficult sections) but by starting your hike here you get some great views up at the cliffs, a close-up of an incredibly gnarly, nearly 8 foot diameter old growth fir on the talus slope, half way up the switchbacks, and 1,300 more feet of vertical to help toughen you up for more difficult workouts. Also, you have the option of coming down the longer road, which goes through an old second growth forest, and since the slope is a relatively modest 1,179' vertical in 3.78 miles, it is an easy-on-the-knees hike.
(If you do chose to drive all the way up, take the road at the extreme left at the five-way junction and park when you get to the powerline road.

Road update, summer, 2014: There is active logging in the area and some new spur roads have been constructed and the main road has been re-graveled - but with large gravel. Watch out for logging trucks and equipment if you go on a weekday. No estimate as to when logging may end so use caution.

Road update, summer, 2014, : the road has been ditched and partially graded and is in the best shape in years. 4WD is still a good idea but a reasonably high-clearance car could get up there with some care.

No permits, fees, or passes required, but logging operations are in progress in the area so watch out for log trucks and other equipment.

The DNR has new rules going into effect as to off "official" trail travel in the area but has yet to get them effectively out to the general public. Stay tuned.

Any time of the year but there will be snow on the upper part of the mountain on occasion. The Fall is great for foliage in this part of the Gorge.

The principal trailhead I've described is at the 1,525 foot elevation level and should usually be snow free most of the winter. I'd go in the morning to take advantage of lighting conditions for viewing the northeast and southeast facing cliffs.

Here's the link to the NOAA site for weather: Gorge Weather

Major landslide during the winter of '07/'08

A signifigant landslide occured sometime around the beginning of Dec. 2007 on the SW side of the Greenleaf Peak bluffs. As of this date, (March 12th, 2008) USGS geologists have not had a chance to investigate and survey but my somewhat educated guess is that this slide covered about 38 acres, fell over 1,000 vertical feet and ran out a half mile before coming to rest. A rock bluff collapsed at the interface between its lower end and the Eagle Creek Formation and something like 500,000 tons of rock crashed 1,000 vertical feet downhill through the forest below! Several thousand mature old growth and second growth fir, alder and maple were mowed down and the area of the slide is a jagged wasteland of broken rock and shattered trees. Just a little modern day taste of what may someday come to the area with a vengance! Photos in the photo section of this page.