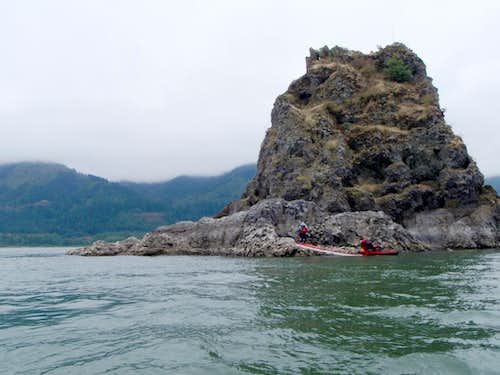 Phoca Rock (also listed on some old maps as Lone Rock or Sentinel Rock) is a basalt crag rising up out of the middle of the Columbia River some six hundred yards off of Cape Horn on the Washington shore. Despite its proximity to Washington, the rock is technically within the state of Oregon. Phoca is reachable only by boat with the single possible landing site being underneath the crag's northern face: a small rocky cove with room for a couple of kayaks. While Phoca is not a major destination by any means, it's an unusual and rarely visited crag which offers a unique perspective on the Columbia Gorge.

Although Phoca appears to be largely composed of typical crumbling Cascade-style choss, the crag is also riddled with numerous miniature caves and rock arches giving it a very different appearance. An old map of the Columbia Gorge located at the Vista House refers to Phoca as "Lone Rock" with a listing that it is 100ft high and some 30ft in diameter. This is likely inaccurate, however.

"Gorge Classic Climbs" by Tim Olson notes that Carl Neuberger explored Phoca Rock in 1958 although he had noted signs of previous visitors. The famous early photographer C.E. Watkins took one of his classic photographs of nearby Cape Horn and Cigar Rock from somewhere near this location in 1867.

Dalton Point
The boat ramp at Dalton Point is only accessible from I-84 in the west-bound direction. From Portland, drive east to Multnomah Falls. Turn around and head back west on I-84 for 1.7mi to exit 29 (signed for Dalton Point).

Rooster Rock State Park
Take I-84 east to exit 25 (Rooster Rock). Once inside the park, turn left/west and follow the road all the way to its end to find the boat ramp. Note that the state park has a $3 day-use fee. From the put-in, follow a short channel westward for about a quarter-mile where it opens into the Columbia River proper. The channel passes below (and gives a unique perspective on) another Oregon crag: Rooster Rock.

Corbett Ramp
There is also an abandoned and somewhat overgrown boat ramp several miles west of Rooster Rock State Park (exit 22). The gate atop the old ramp is usually closed, requiring boats to be portaged about 300 yards along a crumbling old road to the water.

Phoca is probably best visited only on a calm day as the river just off Cape Horn is renowned throughout the Columbia Gorge for high winds. Reportedly strong currents can also be an issue. Despite the great distance from the Pacific, the river in this area is also subject to tidal change. The Columbia's water level also varies greatly with the season, with the lowest water levels generally in August and September. In visiting Phoca in August 2009, we encountered a number of very large sandbars and mudflats barely above the water just to the southeast of Phoca. The river very likely changes, however, from year to year. Kayakers should be prepared for immersion in the event of a capsize and should know how to perform a water exit. The river can also be extremely cold.  Hypothermia can be an issue any time of the year.

Be aware that the main Gorge shipping channel passes extremely close to Phoca Rock. Small vessels such as kayaks do not show up on radar and it may be extremely difficult for barge operators to see you out on the water. Keep a watchful eye out at all times when moving about on the river.

There is one navigational hazard to be aware of: a low-lying rock formation generally at or slightly below the surface of the river extending north about a hundred feet from the east side of the landing area below Phoca's northern face. Approach with caution.

Do be sure to secure your boat if you're spending any time on Phoca. It's always nice to have your boat be there when you come back to it. In August 2009 there was room to pull about two kayaks completely up out of the water, although it is possible this landing area is only be available during times of low water on the Columbia River or at low tide.

Reportedly sea lions have been encountered lounging on the rocks around the base of the crag.  You may need to fend them off to get near the crag.

From the landing area, scramble around the east side of Phoca. Stay at or about the same elevation as far as you can to eventually locate a faint route that climbs up the crag's south side. Scramble upwards on dirty questionable holds (rocks with a vague semblance of stability) and vegetation to the summit. Route is primarily class 3 with a class 4 move or two. The water around Phoca appears fairly deep, although jumping off may not be a good idea per unseen underwater hazards.

Oddly in August 2009 we found a bamboo pole was affixed to the summit with concrete. The pole may have had a flag attached to it at some point. Reportedly a pirate flag was found on the summit in winter 2011.

"The Climber's Guide to Oregon" by Nicholas Dodge, published by the Mazamas in 1968, describes a second route to the summit via the north face: climbing "two or three near perpendicular rock and dirt faces and dirt terraces to the summit." Looking up at the north face from the landing area did not bring the word 'stable' to mind.

Gear:
No special gear is required for the climb -- although having a pair of boots or shoes with decent tread may make the ascent more enjoyable. A short rope may be a good idea for novice climbers. 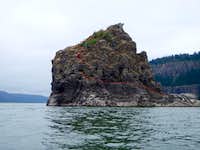 Use of the boat ramp at Rooster Rock State Park requires a $5 day-use fee. Boat ramps at Dalton Point and the abandoned ramp at Corbett Station are free.

There are a number of campgrounds nearby in the Gorge - although camping is not permitted at Dalton Point or at Rooster Rock State Park. Bivying atop Phoca Rock is probably not recommended.