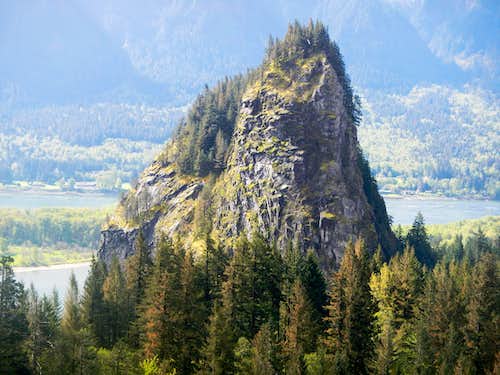 Beacon Rock
Stop freakin'.  Climb Beacon!  Although technically not a mountain in the traditional sense, Beacon Rock is an exciting hiking destination and a rock climber’s paradise.  It features one of the most uniquely exposed trails in the country as well as 400 vertical feet of technical climbing on the south side. Overlooking the Columbia Gorge National Scenic Area, Beacon Rock stands 848 feet above the mighty and majestic Columbia River.  Starting out as the core of an ancient volcano, Beacon Rock was initially whittled down 13,000 to 15,000 years ago by the Missoula Floods, which took the softer soil and rocks downstream.  It was first climbed in 1901 with the use of climbing aids and rope. 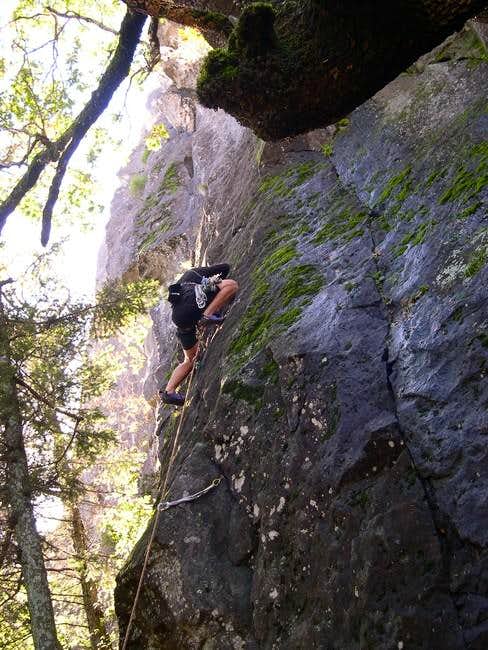 Rock Climbing
Beacon Rock was a landmark used by river travelers for hundreds of years. The Native Americans knew it marked the last of the rapids on the Columbia River and the beginning of tidal influence from the Pacific Ocean, from 150 miles away. Lewis and Clark were the first white men to see the rock. They camped at its base in November of 1805, and Captain Lewis noted the rock in his journal and gave it the present name.  “A cloudey rainey disagreeable morning I proceeded down the river to view with more attention the rapids we had to pass on the river below . . . I could not see any rapids below in the extent of my view which was for a long distance down the river, which from the last rapids widened and had every appearance of being effected by the tide I deturmind to return to camp 10 miles distant, a remarkable high detached rock stands in the bottom on the Star’d Side near the lower point of this island on the Star’d Side about 800 feet high, we call the Beaten (Beacon) rock.” 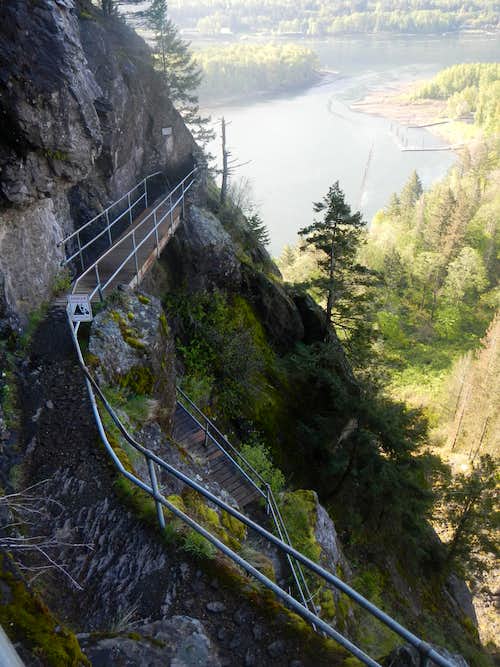 Walkways
In 1811, Alexander Ross, of the John Jacob Astor expedition, called the rock 'Inshoack Castle,' and it was known as 'Castle Rock' until the United States Board of Geographic Names officially restored the title of 'Beacon Rock,' in 1961.

The US Army Corps of Engineers had big plans for Beacon Rock.  It would have been blasted to bits to provide material for a jetty at the mouth of the Columbia if not for Charles Ladd who purchased it in 1904.  Ladd later sold it to Henry J. Biddle for $1.  Biddle was an engineer, botanist, hiker, and naturalist and he agreed to Ladd's terms of preservation.  In 1915 he began construction on one of the most ambitious trail projects the Pacific Northwest has ever seen.  The nearly mile long trail was to include pavement, railings and bridges all the way up the cliff faces to the summit.  The Beacon Rock trail was completed three years later in 1918.  Some later renovations were done by the Civilian Conservation Corps. Biddle also built the trail on nearby Hamilton Mountain.  In 1935 it became a state park.  Read more about the history here. 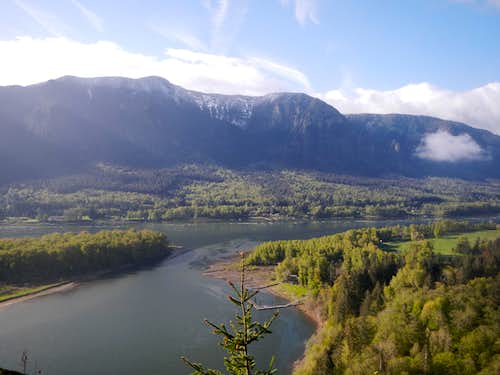 Nesmith Point and the Columbia River
Beacon Rock has enchanted generations of climbers ever since the first ascent of the SE Face in April 1954 by John Ohrenschall and Gene Todd. This is bold climbing and not for those unfamiliar with multi-pitch trad climbing and retreating.

Beacon Rock is located on Washington’s Hwy 14 approx 30 miles east from Vancouver Washington, or 14 miles west of The Bridge of the Gods in the beautiful Columbia River Gorge. To access the south wall follow a south bound trail on the east side of Beacon rock near a sign in/climbers info board.

Beacon Rock is part of the Washington State Park system. To park in the state park lot a state park permit needs to be purchased. The presence of the falcon nest requires that the south face be closed to technical rock activity February 1 to July 15 annually. All climbers must sign in & out at the climbers register on the east side of the restrooms. Climbing is limited to the South or river side of the rock. Please follow all rules at Beacon to help keep this area open to climbers there are many who would like to see this sport stopped at Beacon and are just looking for cause. 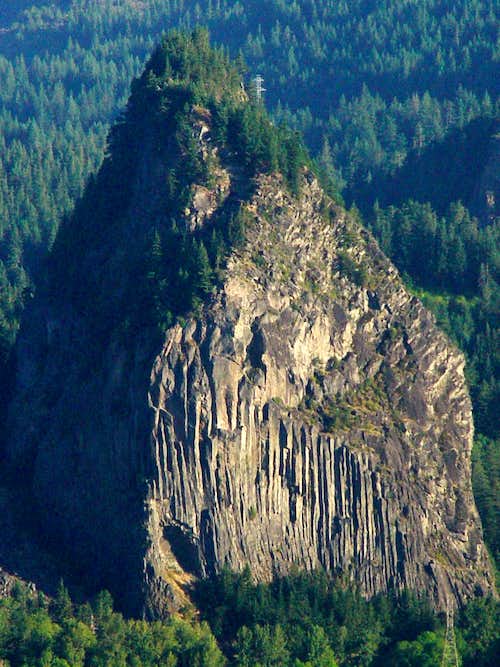 The presence of the falcon nest requires that the south face be closed to technical rock activity February 1 to July 15 annually.