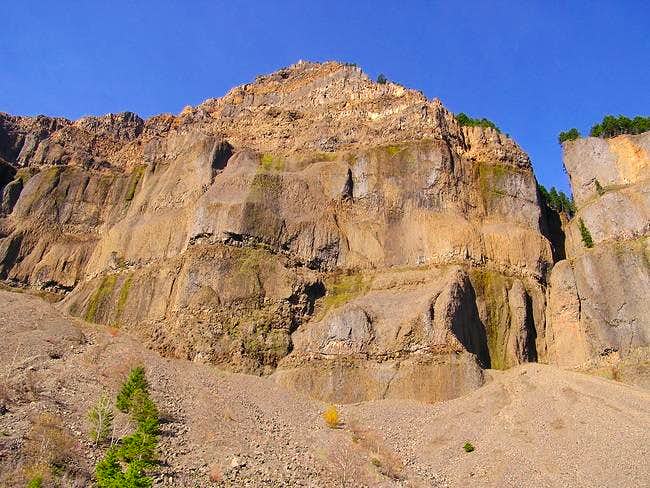 Although not a very big peak at 3417 feet, Table Mountain is one of the most spectacular landmarks of the Columbia River Gorge. With sheer cliffs of about 1500 feet, Table Mountain, along with the similar looking Greenleaf Peak to the east and Hamilton Mountain to the west form an impressive-looking group on the Washington side of the Gorge.

About 700 years ago (according to various sources), the south sides of Table Mountain sheered off and dammed up the Columbia River. The river soon carved a new bend around to the south but for a while supposedly, the Indians could walk across and this legend became known as the Bridge of the Gods. The flat slide area that remains is now forested back over (minus some clearcut areas) and this makes the first 4 to 6 miles of the trail fairly easy. The remaining mile and a half or so makes up for it as you gain 1800 feet up a steep trail. Total gain is about 3400 feet from near sea level so it makes it a decent day's work.

Along the trail you will pass several lakes and a rock outcropping with two formations called Sacajawea and Papoose Rocks which are supposed to resemble a squaw and her child.

The summit ridge from the west or east looks somewhat "table-ish" and there is a trail up the north or south edges on the west side so you can make it a sort of loop trail (a bit over 15 miles). Either way is steep and marked with red "DANGER" tape at the trailheads from the PCT. Don't worry though, it's Class 2 but might be dangerous if wet. This peak makes a great training/conditioning hike and is especially popular with local mountaineering groups for that reason. Great clifftop views, a meadow and lots of beargrass await you up top.

Special consideration should be given for the exposure on this small peak. There are sheer drops of hundreds of feet off the summit/viewpoint area as well as along most of the south face. At least two people have died tragically in recent years. The ground can be mushy when wet and prone to slides. The rock is classic volcanic junk - loose and crumbly. Secure pets and children especially in these areas and don't take any chances. It can be very dangerous here. 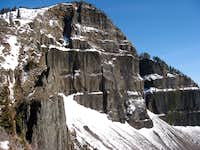 There are more than one trailhead now. You can start near the Bonneville Dam if you'd like. From Portland, take I-84 east to Cascade Locks and take the manmade Bridge of the Gods across to Washington ($1 toll). Go west on Highway 14 on the Washington side about 2 miles to a large sign that says Bonneville Trailhead on the north side of the road. Pull in and park there. It is directly across the road from the large Bonneville Dam. You can also get there from the Washington side by taking Highway 14 east to the same spot and you can save the toll money.

(From the east you can take either Highway 14 or I-84 to the same spot, Highway 14 runs along the Gorge on the Washington side like I-84 does in Oregon.)

Probably the best trailhead is at Bonneville Hot Springs Resort. This cuts out a lot of crap hiking through clear cut areas and gets you to the action quicker. Same directions as above but go about 3 miles south of the Bridge of the Gods on State Highway 14 in Washington. Between mileposts 39 and 39 turn north at the sign for Bonneville Hot Springs on Hot Spring Rd. Go 1 short block and turn right. Follow this road as it curves slowly left, through one stop sign and look for the driveway into Bonneville Hot Springs Resort. Fork left at the building and park in the gravel/crushed rock lot. Parking is $5 and you need to get the parking pass in the resort at the registration desk. The good thing about the fee is that you can take your pass into their restaurant and you get $5 off anything there. 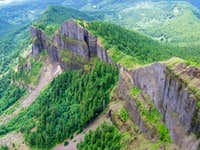 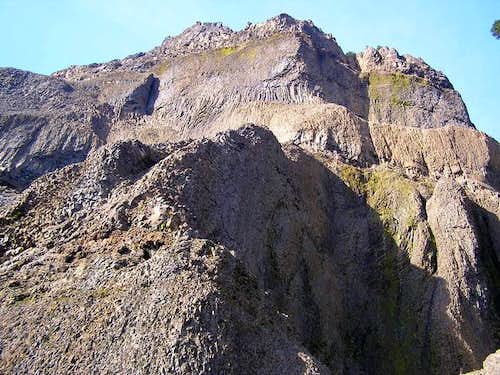 NW Forest Pass is now required to park at the Bonneville Trailhead.

Access to the trailhead is open year-round and is at about 100 feet above sea level so snow won't be a problem there. However, depending on weather (which changes in the Gorge almost by the minute), there could be snow during winter months which would make the last mile or mile and a half of the hike possibly dangerous (or fun if that is what you are looking for). Best weather months would be April/May thru October but could possibly be done year-round.

This is a day use area (at least at the trailhead). There are spots to camp along the way at Gilette Lake (about 2.5 miles into the hike) and at a small unnamed lake a bit further on. There are also spots to camp on the summit ridge but I imagine these are mainly for PCT hikers (the first middle 5.5 miles of the hike are on the PCT) as there is no overnight parking at the trailhead.

You could also camp at nearby Beacon Rock State Park.

Other Things to Do Nearby

The Columbia Gorge is a great area with lots of activities. For technical rock climbing, you can go a few miles west on Highway 14 in Washington to Beacon Rock, the second largest monolith in the Northern Hemisphere behind Gibraltar. There are multipitch climbs up the south face and even a sidewalk to the top (nice walk-off). Also for technical rock climbing on the Oregon side outside of Troutdale, OR is Lewis and Clark State Park with an area in it called Broughton Bluff at the western end of the Gorge. Here's another link to more info about Broughton Bluff.

A bit further east from Broughton is a small spire called Rooster Rock which has the added bonus of being right over a nude beach. Read this interesting tidbit.

Also in the Gorge on the Oregon side a bit east of Table Rock is Hood River, site of the Gorge Games which unfortunately this year were cancelled.

You can also just enjoy driving the Gorge to see the various State Parks and sites and monster walls along the river.