Yes, you can "climb" them, too, and although they're not nearly as high as the surrounding mountains, they will give your legs a workout because of their steepness and the bit of sliding back that accompanies almost every step.

Of the dune fields, Saline or Ibex is the least seen and hence probably the least visited, though few seem to bother making the 4-mile trek to the Panamint Dunes. The Ibex Dunes are in the Southeastern portion of the park, not terribly far from paved roads but not visible from any paved roads. Park attractions that dominate the postcards are dozens of miles away, so not too many people wander into this section of the park, and most who do are there to see amazing Saratoga Spring. As a matter of fact, almost all who see the Ibex Dunes see them in the distance from the vicinity of Saratoga Spring.

The dunes are in a spectacular wilderness setting, with the Saddle Peak Hills, a cluster of desert mountains, as a backdrop, and the higher Ibex Hills to the north across a large desert basin. Especially striking is the view of the dunes in late afternoon and at sunset, when they help frame the reddening Saddle Peak Hills.

Two distinct sections exist. The northern one is longer and has the highest dunes. The southern one has one very large dune and some scattered smaller ones; that large dune is not as high in altitude as the ones to its north but appears to be taller in vertical rise. To understand why what might be the tallest dune is not actually the highest one, one needs to know that the land noticeably rises from south to north here. In all, the dunes stretch for about two miles.

What the exact elevation of the highpoint is, I am not quite sure. That dune is the northernmost major dune in the northern complex, though a large dune just to the east appears to rival it. On the USGS Saddle Peak Hills quad, the highest dune seems to be about 190 m, or almost 625 ft. However, on the Trails Illustrated map for Death Valley, the 700' contour crosses the dunes, which suggests the highpoint could be closer to 750'. Adding to the confusion is that if you google the elevation for the Ibex Hills, you get something called Ibex Dunes Mountain at 360'. There is no 360' peak anywhere near the Ibex Dunes.

For purposes of this page, I am using the USGS quad elevation information. Any accurate corrections to it will be welcome.

Before the dunes were declared wilderness and included in Death Valley National Park in 1994 through the California Desert Protection Act, there were talc mines just east and southeast of the dunes. Those mines were bought out and closed but are still there.

There is an old road leading to the dunes, but it is closed to all vehicles in an effort at wilderness restoration. Therefore, reaching the dunes requires an easy hike of at least one mile. Then it's an elevation gain of about 300' to the highpoint, but a better way is to ascend one of the gentler ridges to the south and then follow the ridge crest north over a few peaks until you reach the highpoint.

Beware the wind! Death Valley is known for its winds. The day I was at the Ibex Dunes, very strong winds kicked up around the time that I reached the ridge crest. The sand was stinging me and getting in my mouth, and sometimes visibility was massively reduced due to the blowing sand. Had it not been my first time there, I would not have bothered to continue.

From CA 127, just south of Dumont Dunes and Little Dumont Dunes (not designated wilderness, and portions are open to ATV use), turn west onto a dirt road (look for a marker about the Harry Wade Exit Route) and drive almost six miles to a junction. Turn right (north) for Saratoga Spring and drive almost 3 miles to another junction. Along this portion of the drive, the Ibex Dunes are in view to the east. If you turn left and drive about a mile, you will reach the parking area for Saratoga Spring. Although you could park at this junction and start hiking to the dunes, you can get a little close by turning right and driving about a mile to a tiny parking area at a closed road (see picture below). Signs indicate that this is a 4wd road and that deep sand lies ahead, but you shouldn't even need high clearance to get to the little parking area. 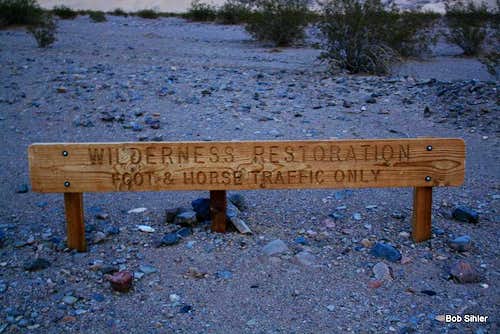 If you're already in the park and approaching from the Furnace Creek Area, drive south on CA 178 (the road to Badwater) for 45 miles and turn right onto the Harry Wade Road. This is marked as a high-clearance road, and it can be bumpy in places, but I have driven it in a Toyota Camry before with no trouble. There are a couple crossings of the usually dry Amargosa River along the way, though, and if there is water present, the crossings can be dangerous or impossible. Anyway, drive this road for a little over 25 miles to the signed road leading to Saratoga Spring mentioned in the previous paragraph.

No red tape other than to obey wilderness regulations, which here basically means leave no trace, do not remove natural or human artifacts, and do not use mechanized means of travel (including bicycles).

Death Valley National Park does require an entry fee, but there are no fee stations, self-pay or otherwise, close to the Ibex Dunes. If you're approaching from Furnace Creek, then you've probably already paid the fee (or should have).

There are no Park Service campgrounds near the Ibex Dunes. Backcountry camping is permitted in the area of the dunes, though not at Saratoga Spring, which is a day-use-only area.