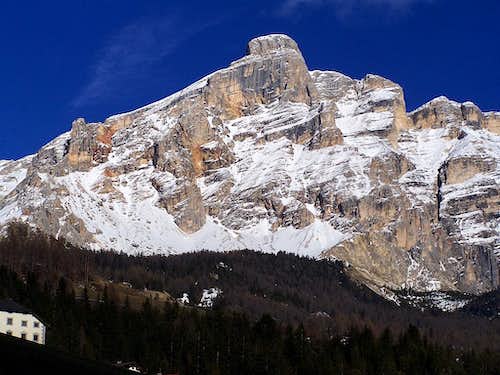 Ejnar Fjeringstad - From the west

La Varella (also written Lavarella) is the second highest mountain in a Dolomites group with the same name. The nearby standing Piz dles Cunturines is 9 meters higher.

La Varella group is like a wreath, encircling a beautuful high plateau of Fanes. While from the Fanes side only the upper part of mountain wreath is solid steep rock, the picture from the west, from Val Badia is completely different. High vertical walls of Neuner, Zehner and Kreuzkofel are a true landmark of Dolomites country. The western side is also the most beautiful side of La Varella, especially when its walls turn red on a sunset light. On La Varella, from the main crest towards the east branches a side crest which divides Klein Fanes and Gross Fanes. The main crest continues towards the south-east, where it ends on Piz dles Cunturines. On this crest, on the altitude of 2930 m (and peaks are only good 100 m higher) you can find a rare natural fenomenon. There's a true small lake - just a few meters from the south-west walls - in a rocky, landscape. It's a miracle how the water doesn't vanish in those rocks. Otherwise on the Fanes side lakes are numerous. Although these plateaus look like being a pure karst, there is due to dolomitic rock an abundance of water also on the surface.

The ascent on La Varella is not very difficult. The paths are marked. From the north an easy ferratta comes and towards the south the slopes are crumbly, not so steep and in winter also appropriate for tour skiing. But still, the peak is not so very often ascended as for example the most popular Dolomites peaks, which can be overcrowded. 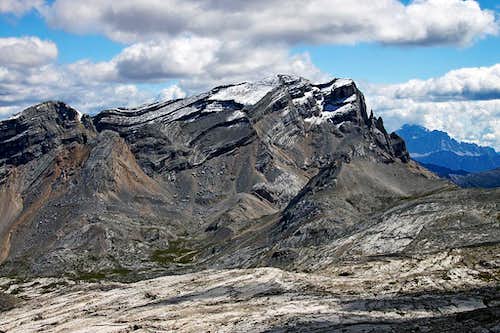 Lavarella from the NW, Forcella Medesc is on the right 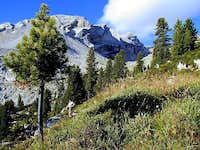 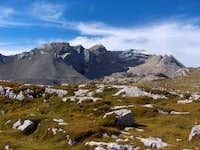 rgg - On the high plateau

No limitations. On mountain maps you will see roads, but keep in mind that they are not open for public traffic. You must either walk or take a Jeep-Taxi. When we reached the peak we saw on the Fanes plateau mountain-bikers (we were also by bikes) so mountain biking is obviously allowed. The whole area is a natural park, so many activities which could affect nature are not allowed.

Summer and Autumn (July to October) are the best for a hiking or climbing tour, spring (March to May) for a ski tour.

I'm almost sure that camping is forbidden in wilderness (because of a natural park). In valleys there are official camps, but anyway you'll need a car (or bike) to get closer to the mountain.

From the area of Fanes a beautiful Ladinian saga originates. As all Ladinian traditions, also The Fanes' Saga was preserved only by oral transmission until the end of the XIX century, when it was written down by Karl Felix Wolff. Visit the fine Adriano Vanin's site and read the legend about Moltina, Dolasilla and Ladinian kings. The Fanes' Saga

I went there in August 2004 and I have found no Via Ferrata to get to the summit. From Forc. Medesc to the top, the way is easy and it is well marked. Anyway be careful because if you slip it can be very dangerous in certain places.

Perhaps you're right. The route is not hard. But as far as I remember, there are steel pegs and artificial means (ropes?) - so, it depends on where you start calling a route ferrata.