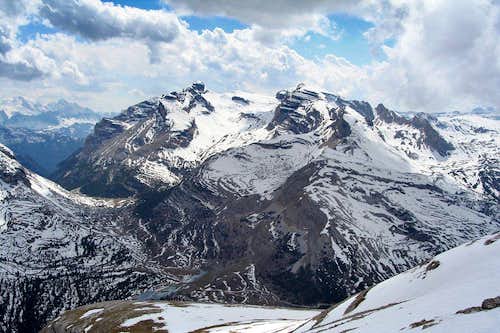 Cunturines Spitze (3064 m) and Lavarella (right, 3055 m) seen from Parei Spitze
The Cunturines-Spitze is a mountain in the Dolomites. In Ladin language its name is Piz dles Cunturines. The peak is also called Conturines. Always in plural form.

Cunturines is the highest peak – 3064 m - of the Fanes Group. The peak is in South-Tirol but it’s only 3-4 km far from the broder of Belluno province.

Cunturines (3064 m) is higher by a few meters than Lavarella (3055 m). And climbing Cunturines is a bigger challenge than climbing Lavarella. Cunturines gives better adventure and better views.

Looking to Cunturines Spitze from north, from Lavarella or from the upland Busc da Stlii, it seems that Cunturines Spitze lives its own life on the plateau around. It has its own distinct mass if you look at it from north, with an approximate height of 150 meter. The peak has a different character from west and from south. It has an almost vertical wall at these sides, falling down 1300-1400 meter. Here you can have that rare experience that you are standing on the peak, looking down, and if you have good eyes, you can see your car down by 1350 meter in the parking place at Cap. Alpina. The peak doesn’t have such a distinct shape from its east side. It has two subpeaks called Taibun Spitze (2928 m) and Cunturines Zahn (2693 m).

The mountain is mainly built of dolomite, at some places substituted by early Jurassic Lias limestone, and at the basement of the mountain with marble, tuff and sandstone.

Due to the high altitude of the peak and due to the vertical walls of the peak there is no vegetation on the peak. It is bare rock.

Very likely Cunturines Spitze was climbed for the first time by local hunters in the old times. Ludwig Grünwald and Santo Siorpaes, his guide from Cortina were the first mountaineers who officially climbed the peak on the 4th August 1880. According to some resources L. Purtscheller was with them, too. 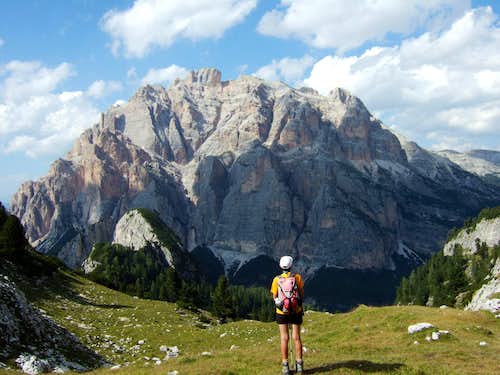 With car:
o From north: Innsbruck – Brennerpass – Brixen – St. Lorenzen (just before Bruneck) – St. Kassian or to Tamers
o From east: Lienz – Sillian – Innichen – Bruneck - St. Lorenzen (just after Bruneck) – St. Kassian or to Tamers
o From south: drive on the highway north from Bolzano. After 22 km turn east into Grödner Tal, on road no. 242. After the village Plan turn left to Grödner Joch (2121 m). After the pass and after village Collfuschg turn left to Stern. At stern you are already at the foot of the Lavarella-Cunturunes mass and you can continue your way on depending on your selected trailhead

The most convenient approach to Cunturines Spitze is through the valley between Lavarella and Cunturines Spitze. This valley starts at Tadega Loch (2157 m). It can be accessed the most easily from north-east or from south.

Tageda Joch can be approached from north-east either from Pederu hut (marked path 11) or from east through Valle di Fanes (marked path 10). Near Pederu Hut (1548m) there is a big parking place. From there you ascend first to the Fanes Hut. Then go on to Limosee, Fanesalm and finally you are at Tageda Joch. Also a bike-and-hike tour can be recommended for this approach because of the distance, although the benefit of a bike is only for a descent.

The most appropriate ascent to Tageda Joch from south starts at Cap. Alpina (1726 m) at Sare Bach. From Cap. Alpina the first ascent is to the view-point of Col Loggia (2069 m), then further on with an easy walk to Tageda Joch. This toursit path is the marked path 11.

After Tageda Joch go west up to the Lake Cunturines. At the end of summer it can be dry. From there walk further on to saddle separating Cunturines Spitze and Lavarella. The marked tourist paths leading to the 2 peaks separate here. This point is in an approximate altitude of 2875 m. Here turn left. Walk a few hunders meters and you are at the foot of the monumental mass of Cunturines Spitze. The Tru-Dolomieu-Klettersteig waits for you. 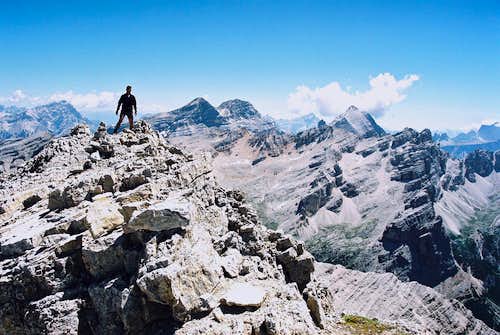 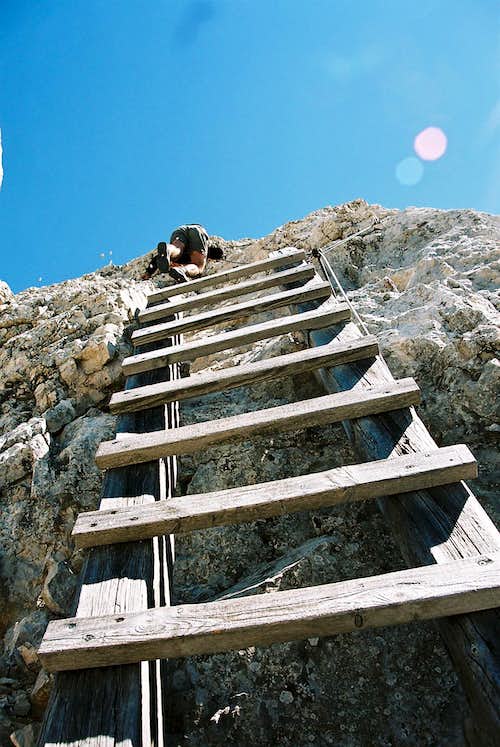 Via ferrata route to the peak 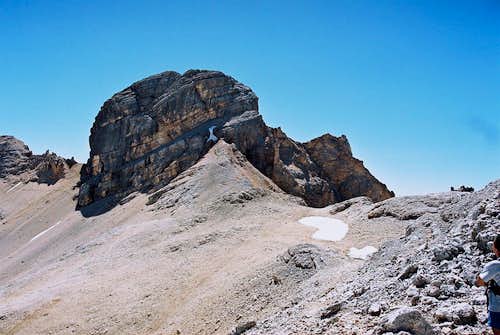 The summit "bump"
The only marked route leading to the peak is the via ferrata called Cunturinessteig or Tru-Dolomieu-Klettersteig. According to a German source it is rated middle difficulty, 3 – B/C. According to Italian sources it is rated 1st grade. I can tell my own experience: what is easy in this Ferrata is that the few vertical sections are solved with wooden (!) ladder. There are no other vertical sections, and the steel cords are more for securing the way then for the purpose that the climber drags himself up using the steel rope. And the via ferrata is short: only the last 100 meter elevation gain must be done on it. Nevertheless there are some difficulties in this via ferrata:
- At the beginning of the via ferrata there is an exposed place where you must jump (horizontally) approximately 2 meters. If the jump is missed, then you are in a big trouble if having no appropriate securing.
- The steel cords are in bad condition: sharp fibres are separated from its main bundle. Via ferrata gloves are needed
- The whole via ferrata is very exposed: often above 1000 meter depth
- The dolomite stone surface along the via ferrata is a bit loose, with small falling peaces of stones.

From Cunturines Spitze several major peaks of the mountains around can be seen very well. Just some examples:

Cunturines Spitze – as well as Lavarella - is not as often climbed as the most popular Dolomites peaks, which can be overcrowded in high season. Though Cunturines Spitze is the highest peak of the Fanes Group, it is less known than many peaks of the Dolomites over 3000 m. Perhaps because of the “shadow” of the famous Tofana peaks that are in near distance.

The best season to ascend is July-October. This peak is not appropriate for winter tour skiing.

Don’t underestimate this peak! There is a memorial plate on the peak, giving memory for a young mountaineer, having this peak as his last climb...

Via ferrata gears. My friend and me coped with the peak without that, but it’s life-hazardous. 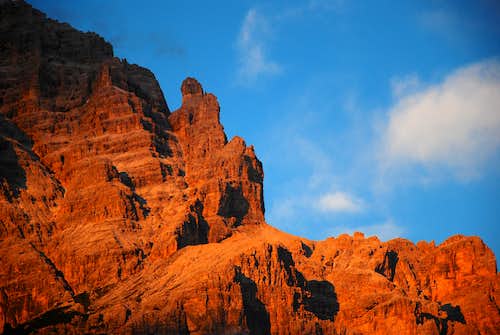 On mountain maps you will see roads, but keep in mind that most of them are not open for public traffic. You must either walk or take a Jeep-Taxi. Mountain biking is obviously allowed.

The whole area is in the Fanes-Sennes-Prags Natural Park, so many activities which could affect nature are not allowed. 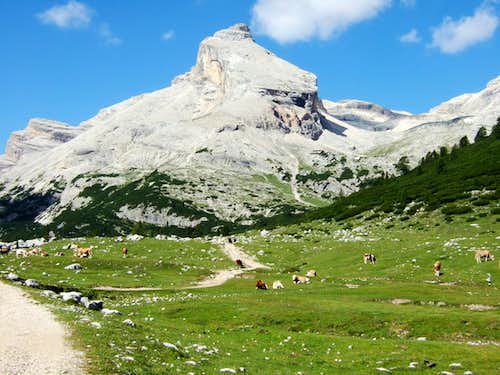 It’s almost sure that camping is forbidden in wilderness (because of a natural park). In valleys there are official camps, but anyway you'll need a car (or bike) to get closer to the mountain.

There are several campings around: