Lander Peak is a jagged and prominent peak of the Wyoming Range of western Wyoming, USA. It does not lie along the main north-south crest of the range, being just to east of it on a divide between the North and South Cottonwood Creek drainages. The peak gained its name and fame from American landscape painter Albert Bierstadt, who made a large oil-on-canvas painting based upon his impression of the peak during his visit to the area [update-see Comment section]. The painting does not greatly resemble reality to me and is highly impressionistic, but seems to show a view of the mountain from one of the Soda Lakes (to the south of the peak). Bierstadt had attached himself to a surveying party overseen by General Frederick W. Lander in 1859. Lander was the namesake of the trail he determined, which became known as the Lander Cutoff of the Oregon Trail (which passes further south in the Wyoming Range). His name also survives in the name of a Nevada county, a large town in Fremont County Wyoming, etc. According to Turiano (2003), Mount Lander was an early name of the mountain directly to the west, which is now called Triple Peak - it is clear that "Lander" was a name in search of a mountain.
I have visited this area several times looking at this peak and eventually made a first (aborted) attempt to top this peak from the Soda Lakes basin, and then made a second successful attempt a couple years later. This account is something more like a trip report of the route I used, though it should be possible (maybe even easier) to hike it from the north (North Cottonwood Creek drainage as accessed on Forest Road 101245).

The most direct way to the South Cottonwood Creek basin (also known as Soda Lakes basin) is from US 189 running in the Green River Basin between the Wyoming and Wind River ranges. I quote direction from Marsh (1995): "From U.S. 189, turn west onto road signed "North Cottonwood - Ryegrass Road" just south of Daniel [town]. The county road continues west for 20 miles over rolling sagebrush hills before entering the National Forest at North Cottonwood Creek." One can view and access Lander Peak from many places along the McDougal Gap Road (#10125 - see below), but I continued south on this forest boundary road on #10050 (South Cottonwood Creek road). The 3-way intersection is obvious.

I chose a route from the South. Cross South Cottonwood Creek on a bridged crossing of Forest Road 10341 (the road is gated/locked after the bridge). 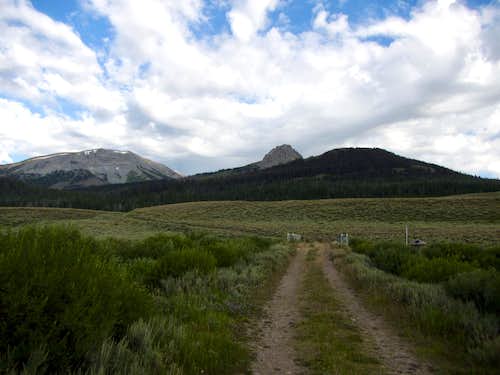 start of route - Lander Peak
The peak is not far distant, but crossing a forest dense with deadfall was necessary. You will lose your landmarks in the forest, but keep going up- I struggled to the top of the forested hill and then the route opened up. I made my way to the low point under the east shoulder ... 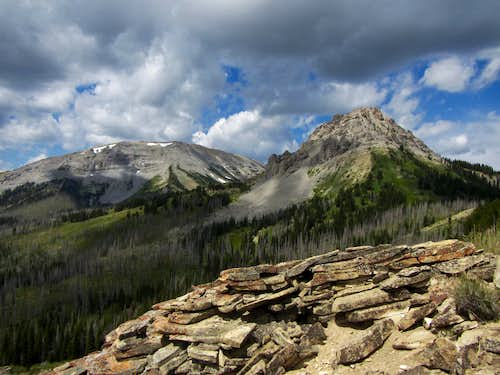 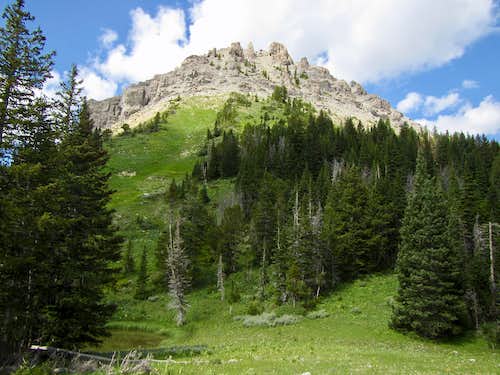 under the Lander Peak
The cliffs are forbidding on the south and east faces, so skirt to the north face. Much of the north is loose rock - bedrock outcrops on the NE part make an easier scramble of it. I started from my campsite off Forest Road 10351 at 08:35, and was at the summit at 11:00. Much of that time was a slow-going struggle through the dense woods. The summit is very jagged rock - I found a summit register in a large (and corroded) Danish butter cookie can. All the signers were locals (i.e., from Big Piney town). 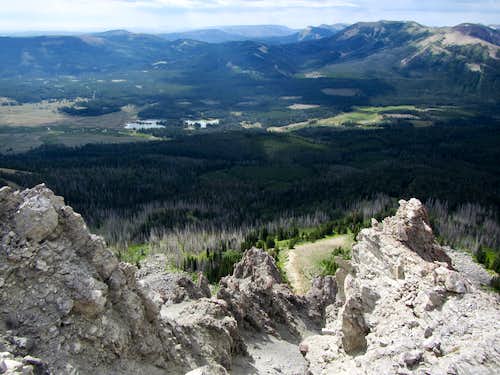 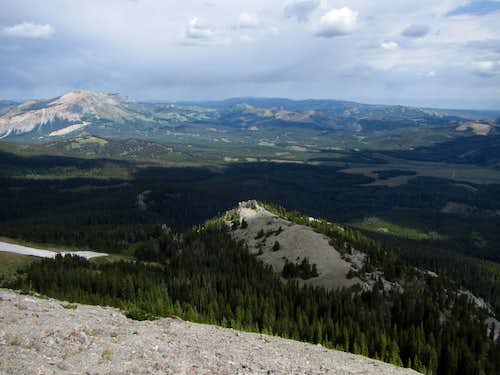 northerly view from Lander Peak
In the above photo, an alternative route is shown. This is the North Cottonwood Creek basin - Forest Road 10125 runs through it. Mount McDougal is prominent on the left. The point in the foreground illuminated by the sun is point 10014 (a small sub-peak shown on the topographic map). There are forest roads (mapped and unmapped) in this basin - this ridge with the sub peak 10014 can presumably be approached by vehicle on one of these roads. I think most climbers probably used this longer route with vehicle assist. More photos from the point of view of Mount McDougal can be seen under that SummitPost account.

Most of the land is administered by the Bridger-Teton National Forest - camping, vehicle use and fire restrictions may apply. The nearest Forest Service visitor center is in the town of Big Piney on US 189. Big Piney Ranger District, 315 South Front Street, P.O. Box 218, Big Piney, Wyoming 83113. Phone 307-276-3375.

Use of the North Cottonwood - Ryegrass county road is best in the summer - use during wet times may cause rutting.

There are multiple informal campsites for vehicle camping in both drainages to the north and south of Lander Peak - but no formal campgrounds in these immediate areas. The area of Soda Lakes is extremely popular and existing campsites can be all occupied in the summer months - but still alternatives are not difficult to find. Bears inhabit the Wyoming Range - take the usual precautions for your visit.